Something has happened! (Or, more accurately, something has failed to happen, but it was surprising, so it still counts as news.) Almost two years ago, I bought a Sempervivum 'Red Beauty' from the garden center where I was working, with the intention of planting it at the new house. Grandma Subjunctive had Sempervivums by her front door when I was a kid, and I thought this sounded like a good idea for my house too. I divided them up, to hedge my bets a little (I figured they'd be fine, but I didn't know whether they'd be durable enough to make it through the move or not, and also I thought maybe I'd want them in more than one place, or want lots of them, and plus I just like propagating things so sue me), and then we moved.

But: that summer was chaotic and unpleasant, and I never got around to planting anything, except for some corn that sucked and some peppers that disappeared in the weeds almost immediately, so I kept them indoors over the winter. A couple of them died (presumably because I continued to water them -- even less often was still too much), but the others survived, so I was all like, okay, this summer, I'm totally going to plant them outside somewhere.

But of course I didn't manage to do that either, and a couple more plants died (I didn't let them go out, in the summer of 2010, for reasons that I'm sure made sense at the time), and finally I was down to a six-pack of offsets that I'd potted up back in 2009. It'd been two years. One of the six had died, they were all stretched from lack of light, and the idea of keeping them through another winter, just to not-plant them again, seemed stupid. So I said, hell with this, and gave up. I declared them officially dead, stuck them on the lowest shelf of a cart in the plant room without pulling the plants out first, and forgot they were there for several months. I'm not sure when this happened, but my guess is August.1

Then in January, I was looking for used soil to re-use,2 and checked the cart, and noticed that they were not only still there, but they were still alive. No water at all, no light to speak of, cold when the heater isn't on, hot and dry when it is, and yet there they were, arguably doing better than they were last winter when I was trying to take care of them. 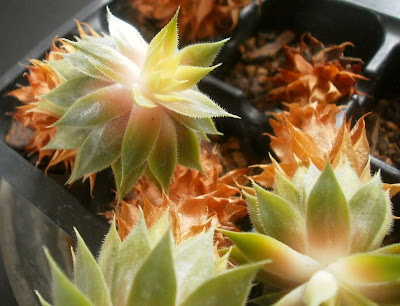 (Granted, they weren't this pale previously.)
So they've earned themselves another year. Will 2011 be the year the Sempervivums get planted outside, at long last? Only time will tell.

-
1 Based mainly on how long it feels like, and what relatively-new plants are in the spot where the Sempervivums used to be.
2 If the plant's died of rot or bugs or something, I won't reuse soil, but it's okay if the plant's died of ugly. Ugly's not contagious. Usually.
Posted by mr_subjunctive at 2:30 AM

They aren't called Sempervivum ("live-forever") for nothing. They don't even need soil. Though I'm a little surprised (but not much) that they're still alive without a winter dormancy.

As bizzare as it seems, most of the plants I managed to kill was exactly because of too much care. Those little guys deserved their chance to live, I am glad it turned that way. They remind me of my "Hen-and-chicks", that I have by the house - require no care what so ever.

Ah, the brave little things...here's hoping they get outside this spring and charm you even more. I love semps, and have quite a few, mostly the hardy variety that tolerate Nova Scotia's sometimes absurd weather.

I have a "black" variety (I forget at the moment) that immediately lost all colouration upon introduction to my living room. Some are surviving in the potato/nasturtium/basil/miniature pepper/lettuce windowbox planter on the windowsill, but mostly, my issue is the overwatering too. I plan on sticking them in a some unusual container and putting them at Mr. Yogato in the spring, whichever ones don't die.

Good luck with your third attempt. It should be the charm, yes?

The only condition that I know semps don't live through is 110° for months of a Phoenix summer.