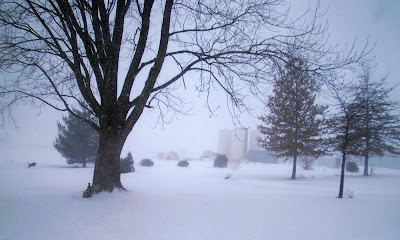 +5 points if you can find Sheba in this picture.
Technically, I think we've been under an official blizzard warning here four times since we moved: twice last winter and twice this winter. I wrote about one of the ones last year, and mentioned the other (though I didn't really write about it), but so far the winter weather this year had been really dull. Even the previous "blizzard" didn't amount to much, especially not by comparison to the winter New England has had.

But this -- even if the snow totals weren't up to New England standards -- was respectable. Or at least it's as good as we're likely to get.

SNOW AMOUNT: GOOD. About 15 inches (38 cm). It's hard to tell with all the drifting, but the National Weather Service kept moving its predicted totals up as the day progressed, and it looked like it was converging on something like 14-19 inches for the storm overall (36-48 cm). 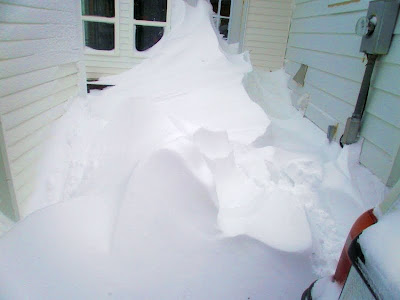 Back: plant room door. Left: garage. Right: house (kitchen).
SPEED OF SNOW ACCUMULATION: EXCELLENT. Snow began 11:30 AM on Feb. 1 and was over by 9 AM on Feb. 2, with most of the snowfall happening, I think, between 4 PM and 2 AM. Tuesday afternoon, after the snow first became heavy but before it had begun to accumulate significantly.
UNUSUAL FEATURES: FAIR. I'm pretty sure I saw one flash of lightning and subsequent echo of thunder, though only one. Some interesting snow drifts, including one on the plant room door that's six feet tall. 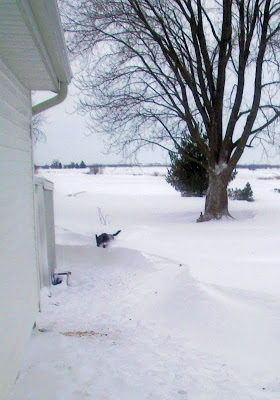 More or less the same shot as the one above, plus Sheba and a bunch of snow.
FEAR LEVEL: FAIR to GOOD. One of my office windows was making all kinds of horrible noises, because the screen had started to come off. One screen actually did get blown off the house but was recovered.

PERSONAL INCONVENIENCE: EXCELLENT. Power stayed on. The wind blew a drift up against the plant room door to the point where it's unusable, but one can still use the front door. The drifts formed around the car in such a way that we could use it easily enough if we had to (though we'd have to shovel a small drift out of the way first). Sheba has experienced minor inconvenience in locating places to pee and poop, as her usual spots are mostly inaccessible now. 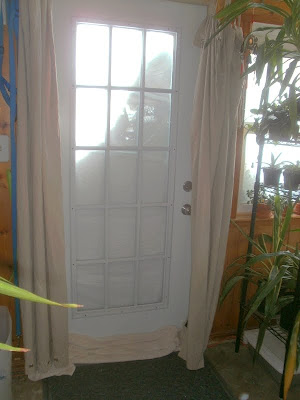 Plant room door, as seen from inside.
INCONVENIENCE TO OTHERS: UNKNOWN. I haven't heard anything about traffic accidents, though presumably there had to have been some. Also haven't heard about power outages. We had enough advance notice about the storm that I think anything nonessential likely got shut down or canceled well ahead of time, but I really have no idea.

PHOTO OPPORTUNITIES: POOR to FAIR. Most of the best weather happened during the night, when it was too dark to get pictures, and today it's been mostly sunny, so all pictures show is a bunch of white, without the shading cues that would tell you how big and deep it actually is. 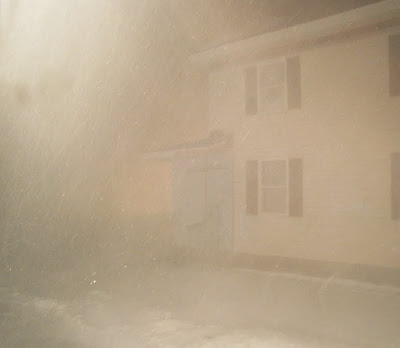 Looking out the south kitchen window at the neighbors' house, approximately 9-10 PM Tuesday.
OVERALL RATING: Five out of five stars. Would participate again, would recommend to others.

Our Buddha (similarly sized to yours, or maybe a little larger) is totally covered. Around 2' here. Rating depends on pre- or post-shoveling, which is still a work in progress and will be for the next two or three days. The cats have rated it approximately 0 stars. At least it mostly came during the day for us, and it was spectacular.

I found Sheba! She looks very happy. I agree with your assessment of the blizzard. I got two days off of work and the power stayed on.

Hah! I don't think I've seen a storm reviewed before. We're still in the grip of one here, about the fifth in the past couple weeks, but it's nothing serious. It's just winter in Canada.

We had the same type of weather here today. We may have had more snow (I haven't verified the amount yet), there were strong winds and it was definitely a blizzard, not just a basic snowstorm. You would have loved it.

This is the best storm review ever.

Glad everyone came through it OK. We were lucky that this one missed us up here in North Dakota.

Harder to work up a lot of enthusiasm when I live a mile from a "real" road and the fella who plows in here just called and said he can't handle it, good luck and goodby. So far, we have a trench to the outhouse and a mostly cleared off kitchen roof. But in farming country snow is called "the farmer's fertilizer" so the veggie garden should take off like gangbusters next spring. Nice pictures - and you finally got the snow you've been waiting for.