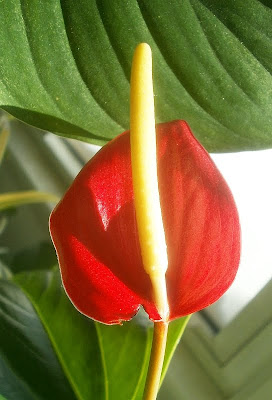 Okay, well, it's true that I've posted a bunch of Anthurium pictures somewhat recently, but this one wasn't one of them, so it's technically new. (The plan is to go somewhere today where I can take pictures of plants doing something interesting, in which case I won't have to reach quite as hard for new post topics. Cross your fingers for me, 'cause sometimes when I try this, it doesn't work and then I wind up burning through an entire day for nothing.)

Also the book giveaway is still ongoing, so if you want a copy of Sara Alway's Soil Mates, hop on over to that post and leave an e-mail address before Monday night for a chance to win one.

Also also, Hulu and Viacom have settled their long-standing argument over whatever they were arguing about for the last however long it's been, so "Beavis and Butthead" episodes can now be accessed through Hulu (except the link at Hulu actually goes to MTV.com, so I'm unclear why Hulu's even involved). I don't expect everyone to understand why, but this is the best news I've heard in months.

Curious to know you're thoughts on the new Beavis & Butthead episodes being created... do you think they'll make them as adults now since it's been so many years since they left off? Or just new episodes and they're the same age as before...

Are you nervous it'll be a big steaming pile of crap in some lame attempt at recapturing the magic, or do you think Mike Judge is capable of pulling off more greatness with the series?

I have to say I'm kinda excited to see what he does. I have a friend who's really angry about the whole thing, he's so scared it'll be dumb he doesn't even wanna give it a chance. It might suck, but it's B & B, so I'll happily give it a chance!

I actually wasn't aware that there were new episodes being created.

I'd be surprised if they made them adults now, though -- you know that even after ten or fifteen years to try, Beavis has still never scored, and that'd just make me sad, not amused.

If Mike Judge is in charge again, I don't see why it couldn't be as funny as the first time; my only concern would be whether there were any ideas left to write -- the first run of the show was on for a seriously long time.