Doesn't sound like a proper cultivar name at all as far as I'm concerned, but that's all the ID I have to give you. 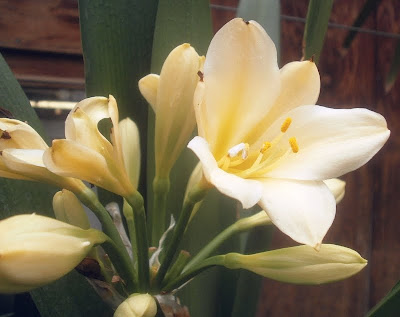 I realize that yellow Clivias are harder to find and therefore more valuable, among those people who value Clivias, but I'm kind of thinking I don't like them as well as I like the regular orange kind. Not that it really matters to me personally -- I have one of each, and neither has ever flowered. (I suspect I don't have a cold enough spot for them during the winter.) I'm just thinking, you know, the yellow blooms ain't all that. I could get excited over a real, vivid, saturated yellow, but this whole cream-color-we're-calling-yellow fails to move me.

I'm posting the picture anyway because 1) I had another picture, over a year ago, from a different store, that I never got around to posting, and 2) because I noticed that the tag refers to the plant as a "bush lily." 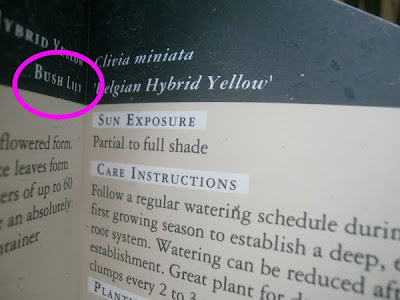 I guess this is what we're calling them now. (The older common name, "kaffir lily," turns out to be a racial slur. Weird how none of the old houseplant books mention that.) I'd kind of hoped that everybody'd just switch over to calling them "clivias," but apparently that's too much to hope for.

I'm in agreement on the common name issue: Clivia is what most people call them anyways, so why not describe them by the genus like everyone else? Thanks for the reminder on my post concerning the Zamioculcas... I completely spaced it for some reason.

I had a some of the regular Clivia I started from seed (the seeds are quite interesting btw -- quite translucent. Sees germinated without and issue and the plants grew. Never could get them to bloom however and finally got tired of it and gave it away.

Been a while since I've seen a yellow one (last time was at Lowes of all places). The ones I had seen were a decentyellow though not as vibrant as I would have liked.