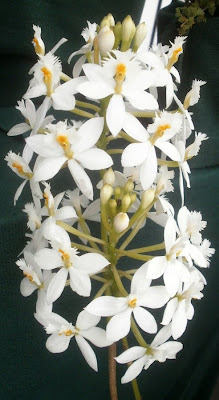 Late Wednesday night, my computer went crazy: I'd somehow been infected with some malware. (The specific one that got me was "MS Removal Tool," a fake security program that not only pops up to tell you your computer is simultaneously infected with 38 really scary things, but also automatically closes most programs you're running and won't let you open new ones. So you can't run your antivirus program, you can't do any actual work in another program, and you can't even open the Task Manager to see what the hell it is that's running on your computer.)

Because we have more than one computer here, I was able to use an uninfected one to search the net for removal instructions, and although it took me five hours to do, I think it worked and everything is okay. I mean, I won't completely trust my computer for a while, but it seems to be working normally again.

[TWO HOURS LATER:] Actually, no, check that, it's still not working normally, and actually the spare one started acting goofy in a similar but McAfee-specific way, too. So there will be no more posting (e-mail is probably out for a while as well) until I can figure out what's going on and how to fix it. This may suck for you, but however bad it is for you, I assure you it's way, way worse for me, since my entire life is on my computer.

Yargh. I wish you success. I can't, and don't want to, imagine the loss if that virus isn't wiped. Start computer in safe mode with networking, transfer images and other stuff to an external harddrive, and reformat? I've had to do that before. It sucks, but it usually fixes whatever virusy issue I can't figure out!

Yikes! From what I've heard, that one's a real nasty. Hope you're able to get it fixed soon.

I started following you since yesterday. I hope you kept 'back up' in a removable hard disk. Reformatting may be the only solution. Man! I can feel the frustration. I was on Mac Afee, it did not help, tried many other net protections but now i am peaceful with Quick Heal for sometime. It comes for a price but it really works