This was new to me. When I was at the ex-job, we had the same single variety of Gomphrena both years, 'Gnome Purple.' It wasn't objectionable -- it was well-behaved in the plug trays, people bought them, and they didn't need a lot of maintenance -- but I didn't really get the point.

Karen 715 showed up in the comments to tell me that no, I wouldn't get the point if I was only seeing them in plug trays: they get much bigger, and they dry well. I was willing to accept that, though I still didn't understand at a gut level.

'Fireworks,' though, they've stuck in four-inch pots instead of plugs, and the plants were already a couple feet tall when I saw them last Friday. I didn't get a picture of the table, but I got a close-up of the flower, and between the height, the color, and the apparent sturdiness, I feel like I understand Gomphrena now. You know, aesthetically. 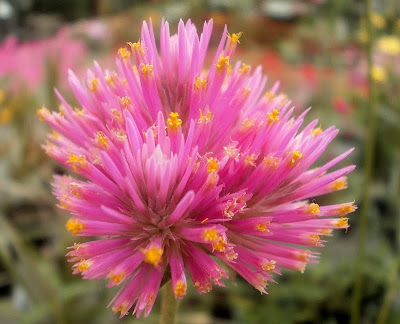 I do kind of wish that they'd picked a different variety name. It's not inappropriate -- the flowers do in fact strongly resemble fireworks -- but it gets that Katy Perry song stuck in my head.

'Fireworks' is very nice. It is new to everyone, only been on the market for a couple years I think. It looks stunning in the garden, forming a huge mass of those flowers, but it has been a problem for people to sell because it trends to look long and straggly in a pot.

Darnit - now I'm thinking about that song, too. Thanks a lot mr_s!