Well, it ate my life from about 11:30 PM on Wednesday night until about 3:30 PM on Friday afternoon, but I think, I'm pretty sure, the malware "MS Removal Tool" is no longer on my computer. Among other things, I have a different antivirus program now.

I had been using Avira, because I didn't have the money to renew Symantec in February when the subscription ended -- Avira is free -- and because previous experience with Symantec and McAfee had left me frustrated with how much they slowed down my computer. So when I saw people in the comments at Consumerist talking up Avira, it seemed like a good idea. The malware problem isn't necessarily Avira's fault; I think it would probably have gotten me even if I'd had Symantec or McAfee, though Symantec and McAfee also sometimes warn you about problematic sites before you click. So I don't know. In any case, McAfee didn't cost me anything: the husband had purchased a subscription valid for installation on up to three computers, a long time ago (I'd gone with Avira anyway because of concerns about my system's speed), so I just used the one remaining installation from that.

It also turned up four viruses that Avira hadn't caught (all trojans, and relatively minor), though, again, in fairness to Avira, I don't know when those viruses showed up -- for all I know they could have been let in by MS Removal Tool at some point after I uninstalled Avira.

So. Now things are possibly back to normal. I don't think I'll feel entirely comfortable on my computer for a while, but I think I can at least use it again. Of course, now I also have a couple days of back e-mails to catch up on.

Maybe I should just be Amish. Find some splinter group that permits air conditioning and fluorescent lighting and married gay couples.

Yeah, doesn't sound likely to me either.

Anyway. So the whole thing's been pretty traumatic. We've also recently had problems with our car (as of 10 June; it was fixed yesterday too), and the VCR ate a tape of Batman Returns Friday morning -- which how we came to have the tape is a long story, and why we were watching it is an even longer story, but it's not what it sounds like, I swear -- so I was pretty sure Mercury had to be in retrograde,1 but no, I am assured that it is not. So I'm blaming the full moon and/or lunar eclipse instead. (That's the nice thing about astrology -- there's always a reason for everything after the fact.)

Anyway. So that's how things have been lately, and here is a picture of a toad. 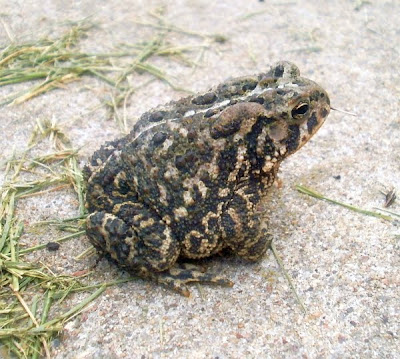 The toad's not a pet or anything; it just happened to be in the pictures folder.

And a picture of Nina, clinging to her water-spotted glass.

1 Mercury in retrograde is an inside joke from a long time ago. So long ago, in fact, that I no longer remember for sure who the inside joke was originally with or why it was funny, but the husband and I have adopted it for use any time a number of things go wrong simultaneously, because Mercury is retrograde a lot (about three months out of the year) and why not. "Real" astrologers claim it's more likely to produce failures of communication, not failures of technology, though increasingly the two are the same thing, given how much communication is mediated by technology now, so at some point I stopped making the distinction.
Posted by mr_subjunctive at 3:00 AM

Malwarebytes has proven to be a particularly good tool for finding malware problems, even just the free version.

I've been using McAfee Total Protection since I got this laptop around 3 years ago, and I love it. Yes, it slows down the computer whenever it's running a scan or installing updates, but I've only had 1 virus in 3 years and that was easily fixed by a system restore. And my job (NDA, so don't ask for details, please) requires me to go to a lot of unsafe sites, so that's saying something. It think it's totally worth the $30-$70 I pay for it each year.

Oh, I totally forgot: glad you're back up and running and cute pic of Nina. :)

Chizpurfles. Definitely. (I thought I was over that Harry Potter obsession, but apparently not.)
I got to have fun with a broken washing machine today.