I've been wanting a Mangave for a looooong time. Basically since I found out they existed, in fact. (If memory serves, that was via Digging, though it's been so long ago that I can't be certain.) And now, thanks to a reader, I finally have one. Or, rather, two: one big one, one small one. 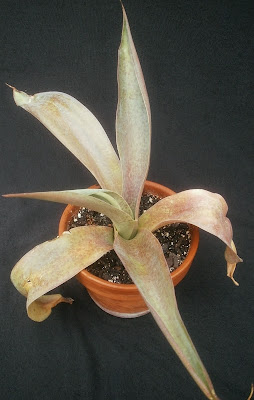 The bigger plant. The pot diameter is ~5" / 13 cm.
Both traveled fine, and I potted them both up with minimal leaf drop. The small plant didn't drop any leaves, but it's not growing new ones yet; the large plant lost a leaf or two, but is producing new ones already. Neither one had spots when shipped, because they'd been growing in shade and then spent a few days wrapped in newspaper in a dark cardboard box, but they both colored up once I put them outside in the sun. 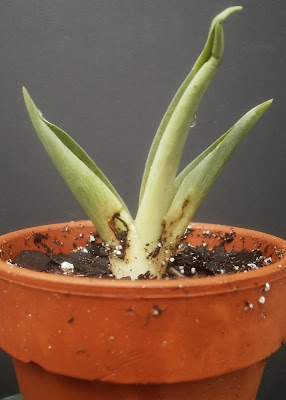 The smaller one, when first potted up: they were both this color when they arrived. Pot diameter: 3" / 8 cm.
That said, I don't think this is the ultimate full-sun coloration either. Depending on their particular spot, the plants north of the garage either get morning and afternoon sun, or afternoon-only sun. The Mangaves are in the first group, but there are still a few hours in the middle of the day when the garage is shading them and preventing them from reaching their full color potential, or something like that. 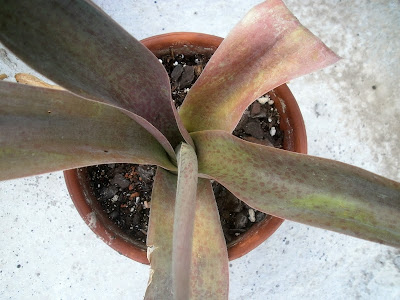 Close-up of the big plant, to show the spots off better.
Regardless of the color (and honestly, whatever color they wind up is going to be fine with me), it looks like a pretty robust plant. I'm a little concerned about the potential size (davesgarden.com says they get to be 36-48 inches / 92-123 cm across), but if I let potential size worry me, my entire collection would constitute, like, three plants.