I know, I know, you were expecting Sheba. This is sort of (barely) Sheba-relevant, though.

I really enjoy riding around on side roads and gravel roads. I like the lack of traffic, and having the option to jump out of the car and take a bunch of pictures of a weed on the side of the road when the spirit moves me, but also it's just more interesting. There are more things to look at, you're a lot closer to them than you are on the highway, and you have more time to check them out because you're not going by them as quickly.

We haven't done much of this lately, because when we bought the house, we lost our main excuse for doing it. Also there are only so many roads in the area, and we'd already been on most of them, so there weren't many left over, and part of the fun is getting to see new things.

But a few weeks ago,1 the husband and I got another chance to do some back-road wandering. We'd both cleared our schedules for the day, because we had a thing to do about an hour south of home and didn't know how long it was going to take. Also the weather was nice,2 so after we were done, we took the opportunity to try to locate some new roads on the trip back.

And we did! Found about 30 miles of brand-new (to us) gravel, which was pretty exciting on its own, but then at one point, we wound up on . . . well, not quite a ridge, but it was a lot higher than any of the surrounding area. Maybe an unusually large hill? In any case, it was neat, and I was taking some photos of the view . . . 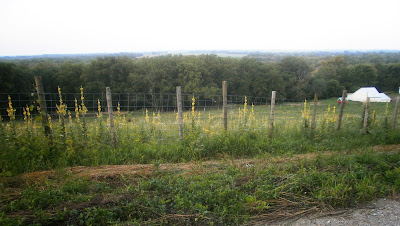 This photo benefits a great deal from being viewed full-size.
Also: remember this the next time someone describes Iowa as flat and boring. Admittedly some of it is, but it's a lot more varied than people know.
. . . when the husband rolled the car forward a little and suddenly there was a BUFFALO. 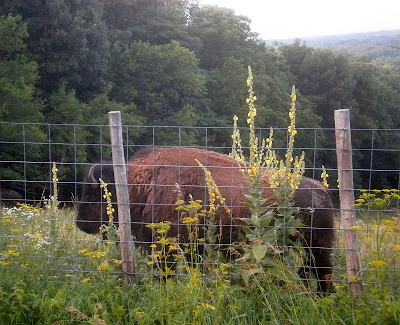 Several buffalo, actually, but only one of them was in a good position for photos.

This wasn't the first buffalo we've seen in Iowa or anything; we'd also run into some somewhere north of Cedar Rapids, about five years ago. But they're uncommon. At one point during the 80s, I remember being told that buffalo were the meat of the future, that they were so much lower in cholesterol than beef, and tasted great, and so on and so forth. Twenty-five years later, it's pretty clear that reality isn't going to catch up with the hype (ditto for ostriches, which were promoted the same way, at around the same time, and which we've only encountered once in our travels, also north of Cedar Rapids), but apparently some people are still raising them anyway.

So this was neat. Plus we could just sit there and watch it for a while.

Sheba took a while to notice the buffalo (she is sometimes a little slow to pick up), but once she did, she freaked the hell out. Growling and barking and whatnot, which initially seemed silly, but the more I thought about it, the more I realized that no, that's reasonable: they're huge, we have no reason to think that Sheba's ever seen one before, and they do have some menace to them. I mean, it wasn't being aggressive or anything, but just the horns, the face and, well, the size. 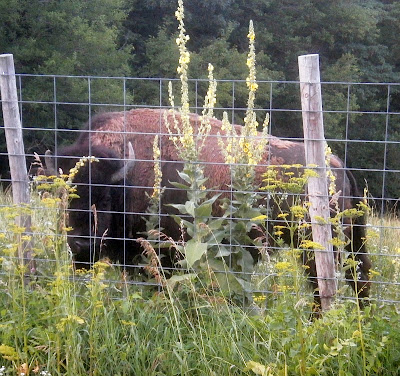 The buffalo did not appear to feel threatened in any way by Sheba, but it did, as you see above, look up from what it was doing so see what all the commotion was. The husband and I felt bad about disturbing it, so we left shortly after Sheba started going bonkers. Still pretty cool, though. I realized while writing this post that I kind of . . . forget, sometimes, that buffalo didn't actually go extinct.


1 (Same trip as this and this.)
2 I am pleased with this summer's weather so far; I don't know if we've been consistently cooler than the historical average this year, but we've been consistently cooler than the last few years, at least.
Last summer at about this time, you'll remember, I was pretty miserable. This year . . . well, the official high temperatures for Iowa City on 23 and 24 July were 79F/26C and 77F/25C, and the forecast as I write this is for a solid week of temperatures at or below 82F/28C. Our forecast high for today, Saturday, is 70F/21C. In Iowa. In late July and early August. Even taking into account that the NWS always predicts a few degrees cooler than reality winds up being, to even be thinking about temperatures below 95F/35C at this time of year is incredible.
EDITED TO ADD: The NWS is now predicting a low temperature of **49F/9C** for us tonight. 49. In July. What.
Posted by mr_subjunctive at 3:00 AM

That is pretty cool. Like you, I also almost forget that these animals are not extinct!

Side roads and gravel roads are a lot of fun. My husband and I drive along roads like that regularly for the peace and quiet, and for photography opportunities.

There are a couple of buffalo farms up my parents' area -- have been since I was a kid. Always made for some amusement when giving directions to family and friends from out of town ...

US: "Buffalo -- look like big hairy cows on steroids."

THEM: "I KNOW what buffalo are, but what do you mean about seeing buffalo? Who the heck has buffalo roaming about?"

US: "Well technically they aren't 'roaming' as they are on a ranch/farm, but the road you'll be on runs right along the their fence."

THEM: "Seriously? You have buffalo up there?"

I think they're supposed to be called Bison.

Buffalo, on its own, is a perfectly cromulent word, as any Google search will demonstrate.

There are people who object to its use for Bison bison, because they feel "buffalo" should refer to one of the "true buffaloes," the African buffalo (Syncerus caffer) and water buffalo (Bubalus bubalis), but:

• wikiposedly, the common name "buffalo" for B. bison predates "bison" by about 150 years,
• it's in widespread colloquial usage in the U.S. (e.g. Buffalo Bill, buffalo nickel, Buffalo Springfield, Buffalo NY),
• and agreement that "buffalo" should only be applied to African buffalo and water buffalo is far from universal (and I'm kind of mystified about what purpose the linguistic separation is supposed to serve anyway, given that they are all bovines and are apparently capable of interbreeding to some degree).

Buffalo as a plural is more controversial, but is one of at least three plurals which are generally considered acceptable, including "buffalo," "buffaloes," and "bison." (Some people use "buffalo" to refer to herds and other mass groupings, and "buffaloes" to refer to a number of specific individuals, though that doesn't appear to be standard.)