Fungi aren't plants, and aren't even particularly related to plants,1 but people tend to think of them as plants, and this fits the scope of the blog insofar as it's something that grew in the yard, so I'm making an exception.

A few weeks ago (3 Jul), I encountered this in the yard. 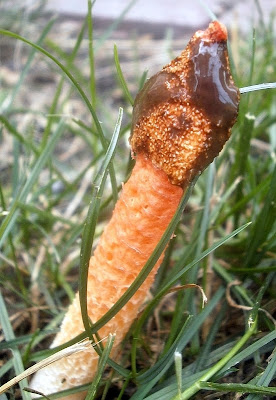 I recognized it as a stinkhorn, a type of fungus, and eliminated a few species from the possibilities, but I couldn't narrow it down much better than that. My best guess is Phallus rubicundus, on the grounds that Mutinus species lack a clearly defined "head," and this definitely has a clearly defined head. P. rubicundus also seems to be relatively common in this part of the country, even though it's not native to the area -- the short version of the story is that it was probably introduced here via mulch; interested readers can find the long version here. I'm pretty sure that there was some mulch spread on this part of the lawn at some point since we moved in, though I can't remember why. So the odds would seem to favor P. rubicundus.

It's not clear where P. rubicundus is actually native; apparently it's been found on every continent but Antarctica. The first specimens discovered in North America were in South Carolina and Texas; it generally favors tropical and semitropical areas, but apparently frost isn't a dealbreaker: it's been introduced and established in the U.S. as far north as Wisconsin.

The brownish slime on the head contains the spores. It's supposed to smell bad and attract flies, though I didn't notice a smell when I took the picture. (Also it's supposed to be green, not brown; it's possible that this one wasn't fully mature.) New fungi are started when the flies carry spores away on their feet.

As to where the spores come from, well, fungi have a very different understanding of sex and gender than we do; I don't even want to try to explain. Try this: A Fungus Walks Into a Singles Bar.

Both 1) things that smell bad to attract pollinating flies and 2) fungus are going to appear on the blog again a few times in the next couple weeks; I know this because I have so many things to blog about all of a sudden that I've managed to schedule the blog for near-daily posts through 19 August.2 Haven't done that in a while. (It's possible I still won't. But that's the plan.)


1 (Fungi actually have more genes in common with animals than with plants.)
2 (Two days off in the next 24 days.)
Posted by mr_subjunctive at 3:00 AM

That explanation provided by the link was really quite fascinating. Amazing the innovations organisms have made for reproduction.