I suppose I'm designating this as #008B, since we've already seen a #008. #008A was disappointing, due to excessively reflexed petals, but #008B is fine. Orange, as most of the seedlings have been,1 but there's nothing wrong with orange. 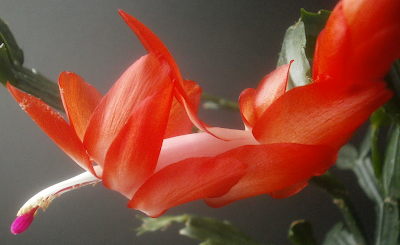 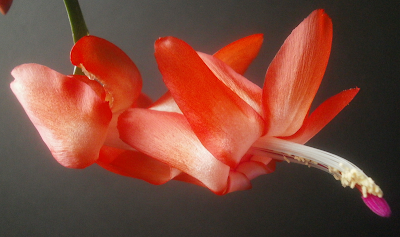 I think this one sort of broke TinEye's search-by-color page, because in addition to the usual, familiar photos of tomatoes, pumpkins, autumn leaves, etc.,2 I got a number of images like this, mocking former President George W. Bush by pretending that his brain farts are revealing of things that he actually thinks,3 next to the word "candor" and its definition. Leaving aside the question of whether or not it is appropriate and desirable to mock President Bush, because I know we all have opinions on that (and likely don't care what one another's opinions are, making their discussion pointless4), I'm bothered by this because the background on the images doesn't even seem like that great of a color match to the bloom.

However, given the repetition of the definition for "candor," which is a short and fairly pleasant word, I think I'm going to roll with that, rather than scroll through page after page of assorted orange things looking for a better name. Schlumbergera #008B "Candor" it is. Apologies to those in the audience who would spell it "Candour," those who would like to discuss the Bush Presidency, and those who feel wronged in some way they can't put their fingers on but would like an apology anyway.


1 All the flowers you've seen so far are from seedlings that had 'Caribbean Dancer' as their seed parent. There are a few seedlings from the 2012 batch that have the NOID peach as seed parent, but none of them have done anything, and frankly they all tend to look a little odd so I'm not sure I even want them to bloom. I think so many of the seedlings are blooming orange because they're all the result of the same 'Caribbean Dancer' x NOID peach cross, and in Schlumbergera math, 'Caribbean Dancer' x NOID peach = orange.
The batch I started in 2014, which may begin blooming in 2016, should have more variety: the seed parents were 'Caribbean Dancer,' the NOID peach, the NOID white, and the NOID magenta. I don't have any guesses on the pollen parents, but it should be at least those four, giving us at least six different possible combinations. As opposed to just the one.
Assuming I start a set in 2015 or 2016, those will have more variety yet: I have fruits developing on 'Exotic Dancer,' 'Stephanie,' #057 "Pyrotechnic," and #025 "Clownfish," in addition to the four plants from the 2014 set. I may also have managed to get some pollen from the NOID yellow spread around, though that's uncertain: I haven't been able to get the NOID yellow to accept any pollen, so it may be sterile.
The point being that you won't be seeing orange forever and ever. Just for the next year or so.
2 One thing I've learned from TinEye: people are not taking enough photographs of carrots. Tomatoes outnumber carrots by at least five to one, and tomatoes aren't even orange. So get out there and take some pictures of carrots today. They need your support.
3 Possibly they are. Possibly they aren't. We don't need to start dredging up the things he may not have meant to say: he's a public figure, and has said and did plenty of things on purpose, out in the open, that we can look at, if we're interested in what sort of man he is. Whatever your political leanings, there's more than enough of information there to judge his character if judging his character is what you want to do.
4 So don't even start in the comments. I mean it. A lot of us hang out on plant blogs partly to get away from people arguing about politics.
Posted by mr_subjunctive at 3:00 AM

While yesterdays blooms were some of the best I've ever seen I also like Candor. And I like the color Orange. Especially in January when we have 6 inches of snow on the ground and another 1-2 feet predicted for tomorrow. Please don't post any white flowers!

I just have to say, your plant-naming thought processes are such a a lot of fun to read!

thanks for not getting all political. I get enough political ranting on Facebook.