And for the second-to-last Schlumbergera post until like October (probably), we have #010A. Which is . . . okay. I mean, we've definitely seen worse. 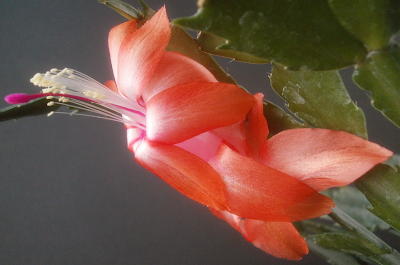 This one was another seedling that I found difficult to name. TinEye generated a lot of names, but none of them quite worked for me.1 I spent a vast amount of time trying to come up with something I liked from the TinEye results, and then when that failed, I spent even more time shuffling around the various pieces of the TinEye results, in hopes of stumbling onto some kind of recombinant name genius, but that didn't work either. Nor was it helpful to bring more fragments from names I'd previously rejected and shuffle those:2 all that managed to do was drive me to semantic satiation for all the words and word-pieces I was shuffling around. 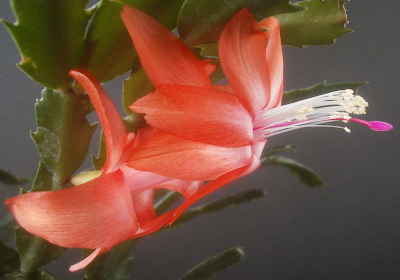 So in the end, I chose the best photo TinEye had come up with, "Presidential," and added to it to make "Presidential Pumpkin." I didn't actually like the name, but I couldn't afford to spend another however many hours it was3 trying to come up with something better. And that photo is straight-up adorable besides. I mean, I'd vote for her. Seems like the sort of person you could sit down and have a couple beers with, you know? Somebody who understands what ordinary people are going through.

And then, having made that decision, it occurred to me that not only was "Semantic Satiation" probably more appropriate for this particular seedling, given the circumstances, but it 1) saves me a repetition of "pumpkin," and 2) is two characters shorter to type. Therefore, a last-minute impulse decision to "Semantic Satiation."

And thank goodness there aren't any more seedlings to name for a while. I don't think I could handle it.


1 I think the problem is that we're at the end of the show, so there's pressure to come up with a really good one.
2 Which is not to say I didn't come up with some names that were amusing or interesting in some fashion: I just didn't come up with anything that I thought I could live with indefinitely as a name. "Pepper Void," "Chick Detective," "Granny State," "Mostly Dancing," "OMG Soup Soup," etc. are all interesting ideas, but they were also all too easy to rule out for one reason or another.
3 (I'm positive I spent at least four on this. Would not be surprised to be told six.)
Posted by mr_subjunctive at 3:00 AM

Maybe for the last one you can have a "nane that seedling" contest. At least you'll get a break from TinEye... which is probably about wore out by now.

You are awesome at naming things. I hope it doesn't offend you if I tell you that I am secretly hoping that at some point you and your husband adopt a human child just so I can see what you end up naming him/her.