Aren't we done with the Schlumbergera seedlings yet, you may be thinking.

And the answer is, well, no, obviously not. But I think we're pretty close. As I write this on 30 January, two first-time bloomers have buds (#010A and #030A), and all indications are that those will eventually open and get their own blog posts eventually, but that's all I have for now. #079A began then dropped a bud, and doesn't seem inclined to try again, and a few of the plants from the first batch, that I blogged about in December, are building a new round of buds now, but a) that's no guarantee that the buds will continue to develop (that group has dropped buds before), and b) even if they do, odds are good that they'll be repeats of flowers you've already seen.1

So my guess is that we probably have two Schlumbergera posts yet to go, certainly not more than four, and then we're done with them until October. And you know what that means: when we finish the never-ending Schlumbergera posts, we'll switch over to never-ending Anthurium posts. So . . . I hope you like pink and red at least as much as you like orange. 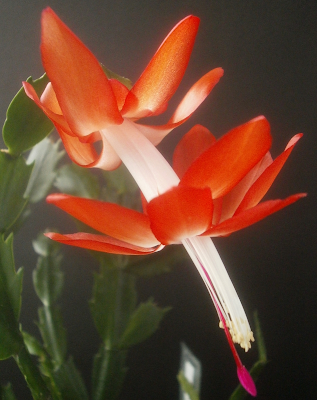 Schlumbergera #031A is nice enough. Obviously would have been a lot more exciting if this were the first orange bloom we'd seen, rather than the 473rd, but that's not the flower's fault.

As is becoming standard, I flipped through TinEye until I got about a dozen options (exactly 12, in this case). I eliminated about half of those immediately, and then agonized over the rest for way too long before settling on one. So here's what I was considering, in the order of elimination:

Pizza is a sort of questionable thing to name a flower, but it's worse when the flower is not actually the color of pizza. I mean, I see why TinEye thought they were similar, but that photo doesn't work at all.
Natalie Downtown was a photo of a woman, I assume "Natalie," drinking a Slushee, and although there's something appealing about the name, it seems super-weird of me to single out a stranger that way, so I'm not linking to the picture. Also it wasn't even that interesting of a picture: the main appeal was the picture's title. Which wasn't, like, push-me-over-with-a-feather spectacular either, frankly. I don't always understand how my brain works.
Arson was pretty easy to rule out too. I don't think there's anything illegal about calling a plant "Arson," but . . . it just seems unwise.
Dig Me Out is an intriguing name: it appears to be a bar / restaurant in Osaka, Japan. It's also sort of a self-defeating thing to name a plant variety, I expect, because you know there would be customers who would.
Guest Room is overly bland as a name. Though the room itself looks fine, I guess.
Dried Spiced Mango is a good color match, but that's sort of the problem: "dried spiced mango" is probably the name of the paint color the people who painted "Guest Room" used, and they probably got it from the Sherwin Williams display at Home Depot. I can do better.
Ibuprofen is sort of obviously ridiculous as a name, though I really like the photo. Really like ibuprofen, too, as far as that goes.
Copper Rocket was seriously considered, but a) it's the name of a bar in Maitland, Florida, which is probably irrelevant but makes me a little uneasy, and b) it's also possibly misleading as to the color of the bloom. A "copper" bloom should be a little redder than this. Though I decided to salvage the word "rocket," because there is something sort of propulsive and projectile about the shape of Schlumbergera blooms, now that I look.
The Gates was the title of the Cristo and Jeanne-Claude installation in New York City's Central Park back in 2005, and the color is certainly in the right ballpark. I think I mainly find "The Gates" too nonsensical of a name for a plant variety, and "Cristo and Jeanne-Claude" is too long, plus I'm not even sure I like Cristo and Jeanne-Claude as artists. So there's no single thing wrong, but there are enough things that are almost wrong that I'm comfortable dismissing this option. 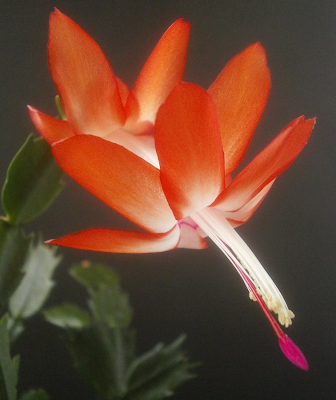 Which leaves us three and a half serious contenders.

Rocket is the half, and you already knew about it, and it's maybe not quite specific enough but there's no denying that it could be sort of appropriate and evocative and blah blah blah.
Baby Carrots is a really good match to the color,2 plus there are my earlier comments about how tomatoes are kicking carrot ass in the vegetable-photography wars, so maybe this would be a good way to stand up for the world's carrot population. Also as far as I know, people are generally in favor of babies, carrots, and baby carrots, which is helpful maybe.
Heatsink is an interesting concept to me,3 and an interesting word, and they're often made of copper, hence the color-match detected by TinEye. Does it make sense for a plant?4
Planet Zip was my favorite photo from the group: according to the Flickr tags used by photographer, it's some kind of long-exposure shot of cars on a highway at night, not that you'd ever be able to figure that out just by looking at the photo. The name is a little weird, though. 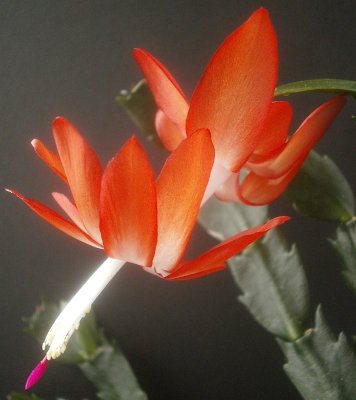 [a day of pondering elapses]

I don't think I'd be able to respect a seedling called "Planet Zip." So that's out. "Rocket" is fine and even appropriate, but I feel like there are probably a lot of plant varieties called "Rocket," or some minor variation thereof: it doesn't feel enough like a me name. And as much as I like "Heatsink," well -- you know how sometimes you'll meet someone named Jennifer and they just really, really don't look like a Jennifer, and then every time you encounter them you have to struggle to remember that their name is Jennifer? I feel like that would happen if I named #031A "Heatsink." Therefore "Baby Carrots."


1 #022A "Sad Tomato," #024B "Bryce Canyon," #026A "Brick Wall," and #057A "Pyrotechnic." "Bryce Canyon" is apparently just a maniac about blooming -- it had a ton of blooms the first time through, and has a ton of buds in development again. None of the other seedlings works anywhere near as hard as "Bryce Canyon" does.
2 Which raises the question: is the color pigment in orange Schlumbergeras carotene, as in carrots (as well as a lot of other orange fruits and vegetables: mangoes, apricots, sweet potatoes, pumpkin, squash), or is it more likely to be an anthocyanin like pelargonidin, which you'll remember from the Anthurium-genetics post? Or some third thing entirely?
Asked and answered: third thing entirely. Cactus flower pigments are more likely to be betalains, the compounds which produce the various colors in beets (Beta vulgaris, hence the name betalain), amaranths, and other cacti. Betacyanins produce red to violet colors; betaxanthins produce yellows and oranges. Carrot orange, Anthurium orange, and Schlumbergera orange are produced by three different pigments, yet all manage to be basically the same shade of orange.
3 Basically a place to dump all the excess heat generated by whatever you're doing, so that it doesn't hurt the equipment that's doing the work. Wikipedia has an explanation.
4 More importantly: does it need to? I mean, if "Sofa Fort" and "Rose Hoses" are acceptable, doesn't anything go, pretty much?
Posted by mr_subjunctive at 3:00 AM

I'm actually liking this one quite a bit...i think it's the contrast pic that white tube against the colored petals... its just striking for some reason.

Sone of these orange schlumbergeras remind me of the carpet from "The Shining". This one maybe not so much since the white is so vibrant but ever since I first made the connection, I can't avoid thinking of the movie whenever I see orange schlums. The dark background helps too, I guess.

I suppose I'm a bit late to nominate "The Overlook Rug" and "Jack's Carpet" as names?

Well, yes, but there are always more flowers to be named. (A couple days after I officially declared the season over and started thinking about doing Anthurium posts, I saw a bud developing on #111, and #057A appears to be producing two different bloom colors from the same branch. So you may be seeing even more Schlumbergera bloom posts in the near future.)