For what I suspect will be the spring's third-to-last Schlumbergera post, I reined in my tendency to collect all the possible name options a little bit. (I thought yesterday's was maybe a bit much.) So instead of 12 finalists, we have seven. 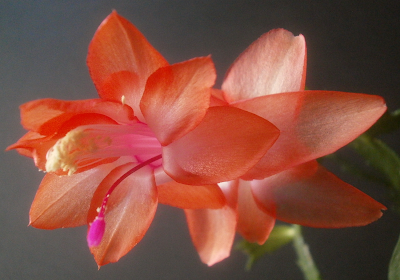 A small apology for the photos: I tried to hide it as best as I could, but these were taken before the flower had fully opened, because the light was better that day than it was supposed to be on the following day. This is most obvious in the following image. 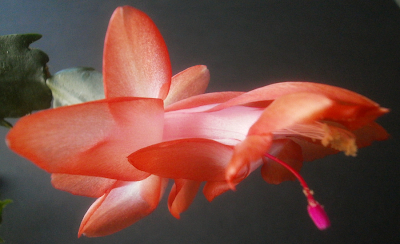 However, even on the following day, some of the petals hadn't flipped back yet, leaving it weirdly flat-looking at the front. So it's possible that this is genetic. Time will tell.

The seven contenders, in order of their elimination:

"Bel Air" is an okay photo, I guess, but the name doesn't really have much to do with the bloom, has a certain snobby rich Southern-California vibe I don't like, and it sounds too much like something someone else would name a plant. I wouldn't necessarily grind my teeth every time I saw the name, if someone forced me to call this seedling "Bel Air" anyway, but there are more compelling options.

"Roadtrip:" I like going on road trips, which I guess counts in favor of the name. It's an odd thing to name a plant, as well, which is also a minor point in favor. But the name's not really relevant to the flower, and there's nothing about it to get me excited, so, again: we can do better. 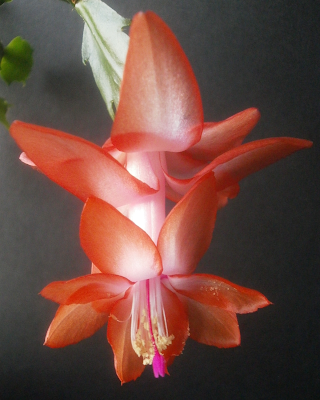 "Ganesha" has a lot going for him -- "remover of obstacles, patron of arts and sciences and the deva of intellect and wisdom," per Wikipedia. Seems like he'd be right up my alley. And the picture is actually kind of nice too. But Ganesha has always just bothered me. Much of this is probably because elephants are freaky, on their own, even when you don't combine their heads with human bodies.1

"Grannyface" shows up on the list again. I don't know why, but that word just tickles me.2

I'm not crazy about the photo -- nothing against the subjects or photographer, it's just, you know, it's just very 1979, in a way I don't like -- though that's not hugely relevant, I suppose. Clearly I really want to name something "Grannyface," someday, but I don't think this is it. 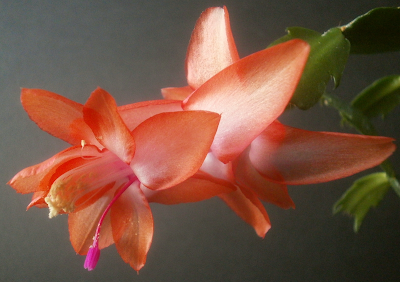 "T. rex" would make a decent plant variety name, except that it looks like a species name (because it is), so it might be confusing, having a species name followed by a different species name. I suppose you could get around that by changing the punctuation (Schlumbergera "T-Rex") or spelling it out (though it seems cruel to ask someone to type out both the word "Schlumbergera" and the word "Tyrannosaurus" every time one wants to talk about the cultivar). It's not as though there aren't plenty of other possible names out there, so I'm not feeling any pressure to somehow force this one to work.

I'm not sure I've ever heard the phrase "Love Fest" spoken in a way that wasn't sarcastic, dismissive, hostile, or some combination of the three. I mean, probably I have at some point, and when I did a search for "love fest," most of the results were of actual public events that people had deliberately and sincerely named that, including: Love Fest in the Midwest, Saint Lucia LoveFest, R&B Love Fest, Library Love Fest, Lovefest San Francisco, etc., so clearly not everybody thinks of it that way, but I wouldn't be able to take it seriously as a name.3

Which brings us to the winner, "Diwali." It's something pleasant, it happens in the fall,4 and fireworks are involved.5 Plus I really, really happen to like the photo for this option, which is never a requirement but certainly never hurts. Also there's enough of a Hindu connection to make me feel a little better about passing up Ganesha.


1 When was the last time you really looked at an elephant? I don't think people appreciate how weird elephants are, since we grow up being exposed to photos of them, and lots of other weird-looking animals (giraffes! killer whales! penguins! horses!) so by the time you're an adult, you just look and see: elephant, and that's as far as the mental process goes. But elephants are almost literally unbelievable. Check it, yo:


Adorable! And yet. . . .
2 The explanation may be as simple as me being reliably amused by most _______+"face" constructions, since to some degree or another I find "duckface," "[resting] bitchface," "Murderface," "shitface[d]," "Funny Face," "'o' face," "pizza face," and, weirdly, "Scarface," all a little funny.
The only exceptions I can think of are the race-related ones (warning: some of the links may contain objectionable images:) blackface, yellowface (The fish is okay, though.), redface, brownface, and paleface.
The face thing doesn't work in reverse. Face blindness, Facebook, face off, face painting, Face the Nation, face value, face-centered cubic: none of them are amusing.
Well, Face the Nation is a little funny. But in kind of a sad way.
3 Taking "Cyborg Unicorn," "Leather Fairy," or "Sofa Fort" seriously: not a problem. Taking "Love Fest" seriously: problem. In my defense, I never claimed that this hangup of mine was in any way rational.
4 Though Diwali is often earlier than a Schlumbergera would bloom (between 2014 and 2022, the earliest date is October 19, and the latest is November 14, so occasionally Schlumbergeras would be blooming for Diwali, but usually they wouldn't). And this particular seedling didn't bloom until February 2, so it's, like, really, really late. So the season may not be that much of a point in favor.
5 Also a bit of a stretch, but Schlumbergera flowers sort of have a vague resemblance to fireworks. Close enough for seedling-naming purposes, anyway.
Posted by mr_subjunctive at 3:00 AM