You may or may not remember that I was eagerly anticipating a new bloom from Carson, back at the beginning of February.

It didn't work out. 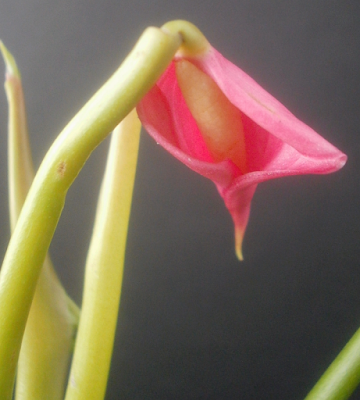 What happened here is rare, but not unheard of -- sometimes the developing bud gets stuck on the cataphyll (the sheath the plants build to protect the developing buds and leaves; you can see dead cataphylls from time to time in my photos because I am not super-diligent about picking them out before taking pictures), and then as the peduncle1 grows, it pushes harder and harder on the bud until it can't bend sharply enough anymore and it strangles itself. This is the first time, I think, that Carson's done this, but #0002 "Alexis Mateo" did it on her first bloom attempt, and I'm sure there have been others that I've forgotten about. 'Midori' has attempted to produce four blooms since arriving last summer, and strangled two of them, so some plants are clearly more inclined to it than others.

The picture doesn't show the break that well, because of the angle, but you can see that the peduncle changes abruptly at some point close to the inflorescence, which is where the problem happened. The peduncle remained attached, but got much narrower at that point. The spathe never opened up any further than the photo shows, and the whole bloom was beginning to dry up by the following day. I'm hopeful that Carson will try again shortly, though he's always been a somewhat reluctant bloomer, so I'm not holding my breath waiting.


1 (= the "stem" on which the inflorescence grows; for some reason I have a terrible time remembering that this is the name for it. Some of the problem may be because there's another term, "scape," which has essentially the same meaning -- a flower stalk -- but is more restrictive: my understanding after a cursory look at the internet is that all scapes are peduncles but all peduncles are not scapes, though I can't quite figure out what the difference is between the two. Since the only situation when I ever need to know is for Anthuriums, I'm unlikely to put in the time to figure the whole thing out, but if you know, hey, leave a comment.)
Posted by mr_subjunctive at 3:00 AM

IANAB, but you got me interested enough to do the looking up. Apparently a scape is a peduncle (=generic flowering stalk) that starts at or below the soil surface---M-W instances the tulip as having a scape.