Considering that virtually all of the Schlumbergera seedlings so far have been orange, you'd think that an orange Anthurium would be no big deal to me: way more orange than anybody could ever need already, no point in getting excited about more. But no. However common orange Schlumbergeras might be around here, orange Anthuriums are rare, and it can totally make my week to see a first-time bloomer come up orange, like happened recently. (You'll get to meet her soon.)1

And Eliza is as orange as they get, so far. 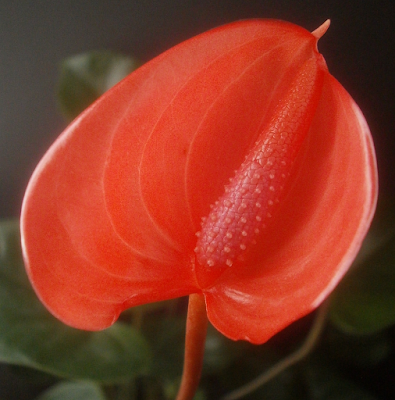 She doesn't have especially large spathes, which is sort of a problem, but they're at least exceptionally vivid. (I'm not altogether convinced that there isn't a fluorescent pigment in there somewhere, because they seem to reflect more light than is hitting them.) Plus the leaves are different, in a way which stands out to me but probably just looks like another stupid Anthurium leaf to you: 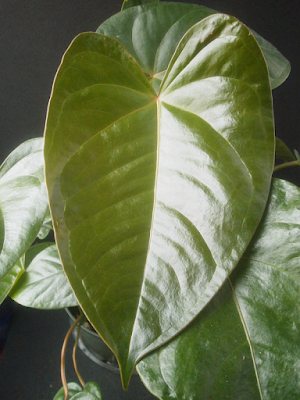 Like #0126 "Erin Dirtylondry," Eliza's been promoted to a 6-inch pot. I haven't been able to pollinate her yet, but I haven't given up trying.


1 Only four members in Orange Club, and two of them don't even attend all the meetings:
#0031 "Sylvester" is orange / white, and #0120 "Eliza Boutisecksis" is orange / orange, and then there are two that are only sort of technically orange: #0118 "Elijah Sturdabowtit" is orange when it first opens but then quickly changes to pink (and then quickly changes to dead -- the blooms are not long-lived at all), and the fourth is the new one that I'll write about shortly, who is also only kind of orange, but in a neat way.
2 (The lobes and tip are both more rounded, the secondary veins leading away from the midrib are slightly sunken compared to the rest of the leaf, giving them a slightly "quilted" look, and the margins curl under very slightly, making the already rounded leaves look even more so.)
Which, um, by the way -- I know I mentioned a while back that I was working on an Anthurium foliage post, and I'm sad to inform you that however long I imagined it taking when I said that, it's going to take me a lot longer than that to finish. It's mainly a problem of not quite having a vocabulary for talking about them yet. I see certain traits popping up in certain seedlings, like, the new leaves on some of them are brown, or all of the veins are slightly sunken, or the lobes at the top of the "heart" are unusually pointed or whatever, and it's easy enough to see those particular bits, but different characteristics also seem to move as a group: a seedling whose immature leaves have a red midrib is also way more likely to have thin, broad, dark-green mature leaves with wavy margins; seedlings with five or seven main veins all radiating out from the point where the petiole meets the leaf also tend to have light yellow-green new leaves. Not only have I not yet sat down and closely examined all of the seedlings' foliage and recorded their descriptions, but I don't even have a terribly good sense of how many characteristics I'm looking for, total, or where to draw the line between trait A and trait B, because characteristics may be more obvious or less obvious, blend together gradually, only appear on leaves after a plant has reached a certain age, only visible under certain lighting conditions, or whatever. I feel fairly certain that I have Things To Say about Anthurium foliage, but I don't know what they are exactly, or even how to go about finding out. So it's probably better if you just forget that I ever promised a foliage post.
Posted by mr_subjunctive at 3:00 AM

Wow, I've never seen an orange Anthurium. I did recently see some Anthuriums dyed blue. Which of course, begs of the question of why. People are weird.

Wonderfull site and such a funny twisted angel you have upon your timegasping "hobby" of yours!
I just stumbled upon your blog, doing some work concerning Indoor plants for a large garden Center chain up in the Scandinavian countries. I must remind myself to come back to your World!
Cheers from Norway!!

You're right about her leaves. They look much more cordate than typical Anthurium leaves. But in really like it. Is she spindly at all or how's her growth habit?

Good, actually. And she suckers well too. My only complaint so far is that the blooms are hard -- or maybe impossible? -- to pollinate; I don't get a lot of chances to try, granted, but I have so far not been able to get any berries.