So last week I had a bad dream. Bees in the attic of a former residence, with honey dripping through a hole in the bathroom ceiling and some tarantula hawks for good measure; the bees part of the dream was almost certainly triggered by this post at Root Simple, which I'd read the morning before the dream. (And the tarantula hawks? My brain's probably been waiting for a good moment to throw some tarantula hawks into a dream since about July, when I started playing Fallout: New Vegas and encountered the cazadores.)

It was bad enough to wake me up,1 and in my bleary early-morning daze, I started the coffeemaker and shuffled downstairs to the bathroom, and there was a . . . thing. Where there was not ordinarily a thing. 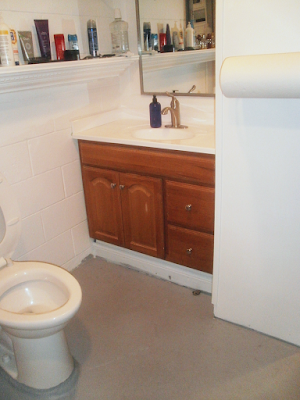 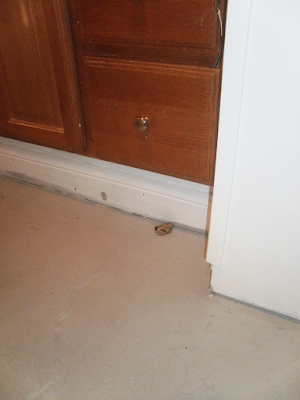 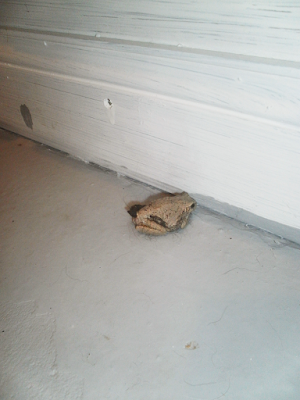 and there was a miserable-looking frog, covered in dog hair, by the sink. 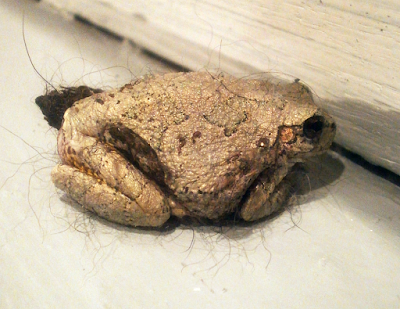 So I use the toilet and get some paper towels together to grab the frog, to take him (her?) outside, puzzling all the while about how it could possibly have gotten in the basement. The shower drain has a grate on it. The washing machine drain is covered by a mat. The dryer is always closed, so even if the frog had come in through the dryer vent, it couldn't have made it over to the sink. It surely wouldn't have crawled up through the toilet or sink or something. We'd surely notice if it hopped into the house while the door was open. Nothing made any sense. Plus it was sluggish, which made me think it had been in the house for a long time, starving, which made the whole thing even weirder. Got it outside, set it down, apologized, and went back in the house. So there was a whole animals-in-bathrooms theme going that morning, is the point.

The husband and I eventually figured out that the frog had probably come in the house by riding on one of the plants I brought in from outside, most likely the variegated Beaucarnea recurvata, which looked like this in early July2 -- pot diameter: 8 inches (20 cm)
-- and I just hadn't noticed it when I brought it in because I was more focused on getting all the plants in before it got cold than I was on examining them for hitchhikers. After coming in the house, it probably jumped out of the Beaucarnea, found itself near the top of the stairs, and went down toward the warmth and humidity, getting covered in dog hair along the way.

Or something like that, in any case. Maybe it was the big Euphorbia instead of the Beaucarnea -- I've seen frogs riding on Euphorbias before. (I was figuring the Beaucarnea because its top is big enough to accommodate a smallish frog, and it would have been hard to look in the top accidentally, plus it's been more or less at the top of the stairs ever since they came inside.3 But whatever.)

That would have been the end of the story, but there was a nice coda the following morning when I took Sheba out: I was collecting some Portulaca seeds near where I'd dropped the frog off, and something moved. I turned my head, and saw this: 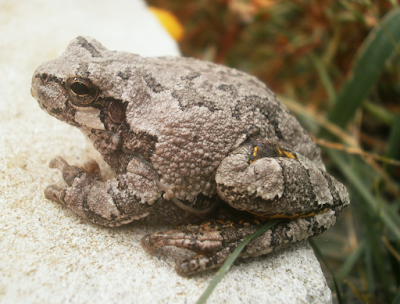 I know that wouldn't have to be the same frog, but it was, literally, like six inches from where I'd put one down twenty-four hours earlier, so I figured probably. And then when I was adjusting the color on the photo, I noticed that the one in the picture had a wad of wet dog hair across its thigh, between the two yellow spots. So. Maybe hanging around to say hey, thanks.

Or else asking for assistance with the dog hair, which if that was the case then I guess s/he was pretty disappointed.

So now I'm thinking I have a business opportunity: an eco-friendly service for cleaning up pet hair in homes. When you sign up for the service, which I'm thinking of calling "Anura Maid," a customer service representative drives over, has you sign a liability waiver for Salmonella-related illness, and dumps a box full of frogs (I'm thinking like one frog per three square feet of floor space) into some central location, like a living room or kitchen. Three days later, we come and pick up all the frogs we can find (any that we can't find are yours, free to keep!), return them to headquarters, wash them off, feed them a few mealworms, and send them back out again. For a modest additional fee, one frog in every ten could be wearing a little maid's outfit. Obviously they'd double as exterminators.

The only part I haven't quite figured out is the re-collection process, which would be pretty labor-intensive unless I can come up with a way to call them all back to a central location. There's no such thing as a frog-whistle, though there are mating calls. Would they necessarily come back if they heard a mating call, though? Any time of the year? And how long would that take them? People might be less inclined to use the service if they knew we had to play high-volume frog mating calls for eight hours at the end, after all. And also there'd have to be a whole tadpole-production facility for replacements, which might get expensive. I don't know how much people would be willing to pay to have a box full of frogs dumped in their houses, but it's probably best to keep the price point as low as possible. What do you think? Worth a Kickstarter?


1 You know you've hit adulthood when you have a dream about an attic full of bees and what wakes you up is not the fear of being stung by the bees, but the fear of how expensive and inconvenient it's going to be to get the hive removed and the damage to the bathroom repaired.
2 And like this in December 2007, when I bought it: 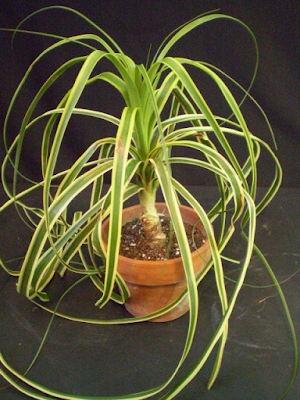 pot diameter: 4 inches (10 cm)
3 Like two weeks ago. I never remember to take into account that if I put them outside, they're going to grow, so there's this long transition period every fall where I'm trying to figure out where they can all go.
Posted by mr_subjunctive at 3:00 AM

Sign me up for a house full of frogs, they're so cute! Fair warning, you may end up not getting them, or their little outfits, returned :)

Isn't that a toad?

I think it's a brilliant business plan. Like Merry Maids, only Merry Frogs. Definitely worth a kickstarter!

Definitely worth a kickstarter! At least you are not begging outright, like many others.

I keep my own dog hair collectors, fire bellied toads Bombina orientalis. I try really hard not to use them very often, because a frog/toad covered in dog hair often experiences fatal desiccation, not unlike the fate of many house plants.