Dennis is a bit of a disappointment, though that's more my fault than his. I saw a dark red bud appear in late July, with an odd orange tint to it, and I got all excited because it seemed like maybe it was going to be something new and different, but . . . not really. 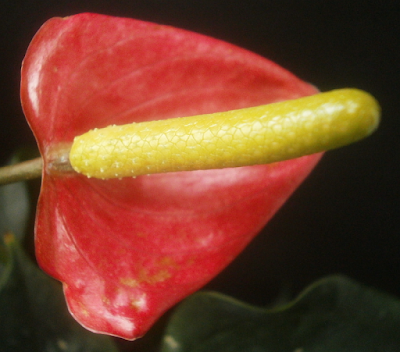 Not dark slightly orangish red; just a dull normal red, with a slightly greenish yellow spadix. Not nearly as pretty or weird as I'd hoped for. And thrips damage is a lot more visible on him than most red spathes, so he can't even do an ordinary red spathe right.

The foliage would be pretty, but it has some marks here and there from thrips, drought stress, mechanical damage, or whatever it is. That's conceivably something he could grow out of: sometimes they do. 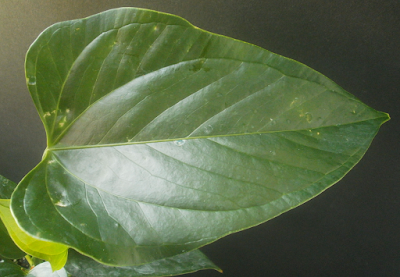 One small point in his favor: he's a fairly compact seedling, with short internodes. 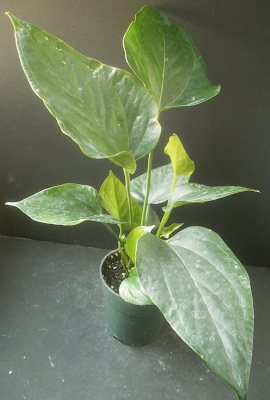 He might be useful for breeding anyway; the seed parent is 'Gemini,' and 'Gemini' genes are a dime a dozen, but the pollen parent is likely the NOID red, which brings with it darker leaves, green spadices, and the potential for bronze/brown and green spathes. Which are all things I'd like to see more of. 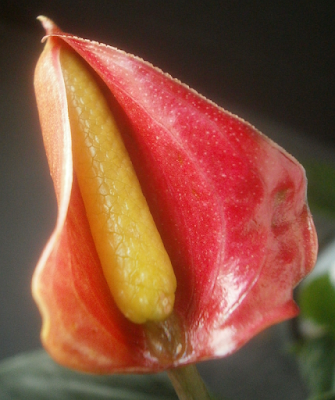 And even if he doesn't have any kids, he might be sellable if the thrips can be brought under control. So I'm not throwing him out or anything. Just disappointed.

As for the thrips:

After I mentioned "taping" the thrips (pulling them off with a piece of adhesive tape) on 5 October, I got even more into doing it. At first it was just recreational, a way to make myself feel slightly better about how many thrips I was still seeing, but then I noticed that I was seeing a lot more thrips on the tape, under the microscope, than I had been seeing with my naked eye before taping. Maybe even eggs, though I'm not sure what thrips eggs look like so maybe not.1

Anyway. So one thing led to another, and now taping the thrips is my Plan E2 for getting rid of them. It's already more effective than imidacloprid or predatory mites, which didn't work at all,3 it won't cost me blooms like white oil, and it's sort of self-evidently an improvement on hand-squishing if it's catching thrips I otherwise couldn't see. Even if it doesn't eliminate them, it should reduce the visible damage on the blooms, which is worthwhile. The main down side is that it's time-consuming, but I can probably live with that if it helps.

Taping also has the side benefit of being somewhat useful against scale; it's difficult to pull up mature scale insects with tape (you have to make sure that the tape is coming into contact with a lot of the insect or else the bug stays attached), but it gets younger ones easily enough, including scale too small to see with the naked eye. The depressing part of that being that there are still so many scale insects around to be caught.

Maybe taping will be useless as well, but it's something else to try. Sooner or later, something has to work, right?


1 The thrips are bright yellow under the microscope, and I've seen yellow roundish objects on the tape, so it's not too much of a stretch to think that maybe those are eggs.
2 Plan A: hand-squishing (somewhat emotionally satisfying, but very little effect on the infestation)
Plan B: imidacloprid (expensive and completely ineffective)
Plan C: white oil (effective, but didn't eliminate the thrips, and caused most of the Anthuriums to drop buds or blooms as well)
Plan D: predatory mites (expensive and completely ineffective)
Plan E: adhesive tape.
Plan F will probably be spray pesticides. Pyrethrins, perhaps.
3 The more I think about it, the more I doubt that the shipment of predatory mites contained as many live mites it was supposed to. (If I had it all to do over again, I would check them out under the microscope after the bottle arrived; I sort of can't believe the idea didn't occur to me at the time.) Though I'm also thinking that trying to use them indoors was probably a doomed idea from the beginning, if they really do need high humidity.
Posted by mr_subjunctive at 3:00 AM