And now for something completely very nearly different.

I've had Anthurium schlechtendalii since May 2010, when I got these tiny little seedlings as part of a plant trade: 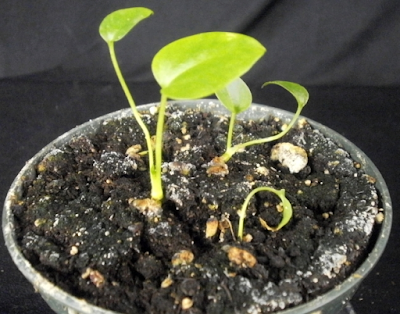 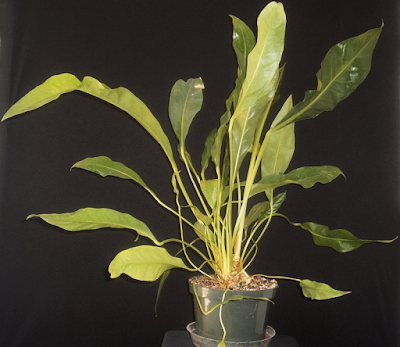 pot size: 8" (20 cm)
The seedlings have grown since then, obviously, but the plant still looks more or less like the 2013 photo, so there's really no need to get more pictures, plus the leaves are big and easily torn and the whole plant flops around wildly when I pick it up to water it. But I've had to get some new close-ups recently, because it has bloomed. 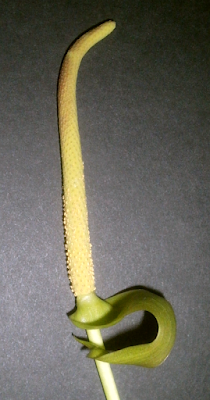 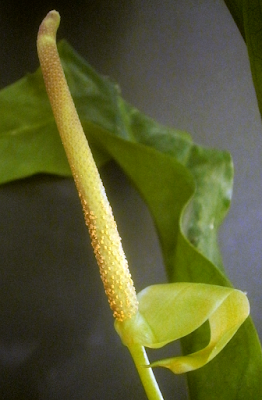 No, this is a describe-the-odor post. The one super-notable thing about this inflorescence is that it smells.

None of my Anthurium hybrids have had a detectable fragrance. I've noticed this, but hadn't really thought about it one way or the other -- I hadn't even known that it was theoretically possible for them to have an odor until I got the breeders' guide (which says that A. armeniense, one of the species which will hybridize with A. andreanum, has a pleasant fragrance), and apparently that's not easy or profitable to do because I don't think I've ever run across a scented Anthurium. But A. schlechtendalii definitely has a smell, which the husband and I puzzled over for some time (vinegar? solventy? sort of the odor of certain aisles in a home-improvement store, where lots of stuff is off-gassing heavily at once? like how a coffeemaker smells when you've run some vinegar through it to clean out hard-water deposits and it hasn't been completely rinsed out yet?) when the husband nailed it.2

It smells like the bottom of a heavily-used and never-cleaned garbage can. Like, if you have a big 50-gallon garbage can in some public space that people have been throwing crap into all day long, and it's full, and you pull out the bag to change it -- the odor that you smell when you lean in to position the new bag at the bottom of the can is what the inflorescence of A. schlechtendalii smells like.

Almost as surprising as the smell itself is the fact that nobody seems to think it's worth mentioning. I looked for other descriptions on-line, but I could only find one other one. Seedman.com claims "a ripe banana-like fragrance." (!)

There is nothing banana-like about this inflorescence.3

Fortunately, as sharp as the odor is, it's not actually very powerful. I can't smell it at all, unless my nose is within a few inches of it, and the odor is less intense during the day. (The garbage-can description is most applicable at night; in the mornings, the solvent/floral notes are stronger, and it's much less vinegary.) So it doesn't make the room it's in (the husband's office) uninhabitable, which is good.

I should probably note that my plant differs from outdoor-grown specimens in several ways (narrower leaves, duller-colored inflorescence, etc.), and it's possible that it might have a different scent if it had been grown outside. Additionally, while I have reason to think that the ID is correct, I'm also taking someone else's word for it, so it's possible that I have a hybrid, or another species, and the real A. schlechtendalii really does smell like bananas. I mean, I doubt it. But it's possible.

Anyway. I have several posts in the works after this which aren't related to Anthuriums, Schlumbergeras, or orchids, which I'm hoping to put up on the days when I don't do Anthurium or orchid posts. If I can pull that off,4 we'll be back to daily blog posts for about a week or two, starting nowish. See you tomorrow for another Anthurium.


1 Anthurium is a gigantic genus, with about 1000 species in it. With some genera of plants, you can safely assume that any species in the genus can hybridize with any other, but that's not the case for Anthurium. Instead, the genus is divided into smaller groups called sections, which are more closely related to one another and therefore more likely to interbreed successfully. (And even then the sections aren't divided strictly along lines of genetic compatibility; the whole thing's a mess to explain.)
Commercial hybrid Anthuriums like the ones I've been playing around with are related to A. andreanum, and get most of their genes from the section Calomystrium (plus a few species in Porphyrochitonium).
A. schlechtendalii, unfortunately, is in the section Pachyneurium, and is completely incompatible with my hybrids, so there's no chance of me being able to breed any of my seedlings with it to get pretty blooms on a plant with three-foot-long leaves. (I do still have the Anthurium "hookeri"a around, which is probably also in the section Pachyneurium, and it blooms occasionally, so there's a non-zero chance that I might someday wind up with a handful of seedlings from a cross between the two of them. But they're both gigantic plants, so their offspring probably would be too, and it's probably just as well that that hasn't happened yet.)
a (in quotes because it's probably a hybrid, not an actual A. hookeri, but that's the only name I have for it so that's what I call it)
2 He's much better at naming smells than I am, though he claims to have a terrible sense of smell. He was the one who came up with "like a florist's cooler" for Hoya lacunosa, which was exactly right.
3 Except to the extent that bananas do sometimes wind up in garbage cans. But that's the only point of overlap. You'd never smell this and think "Hey! Banana!"
4 It's been a while since I attempted daily posts, and have a few new demands on my time lately, so I'm not at all sure that I will be able to do this. Hence if.
Posted by mr_subjunctive at 3:00 AM

I wonder if some people are just better at smelling banana-like smells than others. Because my apprentice frequently claims things smell like bananas, and they don't smell that way to me at all. (And I also don't want to say, "You're crazy, this doesn't fucking smell like bananas", because that is not how you talk to people you're teaching.) Maybe they have different receptor cells or something.