Monica's not the best ambassador for Anthurium Nation either, though she does better than 0470 "Heather Haldane," from last Monday. Here's the bloom: 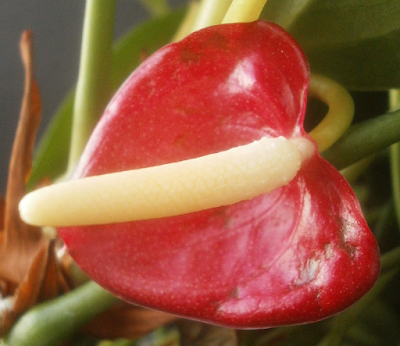 The real-life color is a bit darker red than this, so the thrips scars don't show up as obviously in person, and the foliage is mostly unbothered, so the plant looks pretty okay in person. 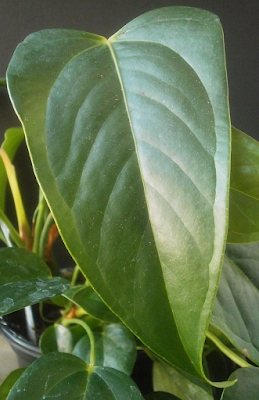 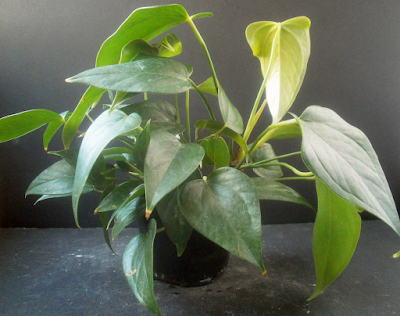 However. Monica is also sort of pulling herself out of her own pot, from being top-heavy, which is weird, because she has short internodes and so shouldn't be flopping over, but she's still flopping over. It's possible that some of the problem is that I've washed a lot of soil out of the pot in the course of watering; plants that stay in 4-inch pots often need additional soil sooner or later. Another possibility is root rot or some other kind of root injury, though I haven't seen any evidence to support that yet. 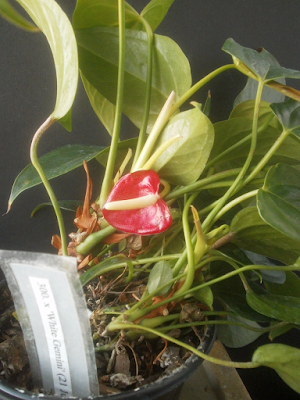 The other issue with Monica is that the peduncle on this bloom is short. How short? So short it can barely unfurl itself. There's only been the one bloom so far, so I don't know if this is normal first-bloom incompetence or some sort of adolescent nonconformist Jesus-Dad-nobody's-doing-long-peduncles-anymore-you're-so-embarrassing thing.1 Since the foliage is good, I'll probably let her try again before making any big decisions, though I'm a little nervous about that: I've seen scale in that part of the basement, and just because Monica's been fine so far doesn't mean she's necessarily going to stay that way. We'll see.


1 Less anthropomorphically: it may be genetic, as appears to be the case for 0408 Tex Messich, 0335 Donna Fanuday, and a few others. I don't normally mind this, and in fact liked Donna and Tex well enough to promote them to 6-inch pots despite their peduncles, but Monica's a more extreme case.
Posted by mr_subjunctive at 3:00 AM