And now we have the first orchid of the 2016 show. I don't think this happened deliberately, but it seems somehow fitting that the year begin with Phalaenopsis I-Hsin Balloon, who has also appeared in 2014 and 2015. (The 2015 pictures are the best set.) 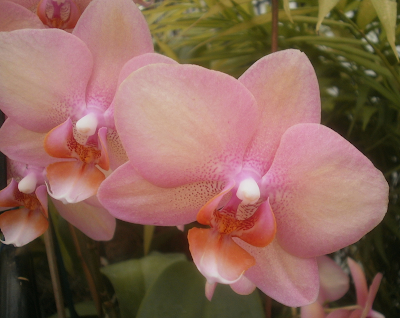 I-Hsin Balloon is probably the Phalaenopsis I most covet, from all the ones I've seen at the show.1 I'm also happy to see it show up for a third consecutive year -- it's weird, because normally I'm all about seeing new stuff, but there are a few plants I look forward to seeing at the shows, and I-Hsin Balloon is one of those.2 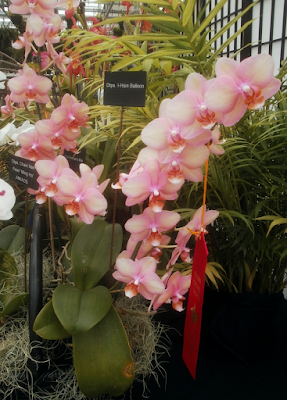 
1 (Though arguments could also be made in favor of Kaoda Twinkle 'Dusty's Midnight', Brother Goldstone, Brother Sara Gold, and the last NOID from this set.
I probably don't covet any of them enough to actually buy them, though. Partly this is because I don't really buy plants anymore, except for the occasional Anthurium or Schlumbergera, and partly it wouldn't make any sense to bring new orchids in, because I'm not a competent orchid grower.)
2 The king of repeats is Guarianthe aurantiaca, which I've gotten photos of every year except for 2013. (I imagine it was probably there in 2013 too, and I just missed it.)