Thanks to those who expressed sympathies yesterday about my expanded thrips situation. The glory of the orchid posts is that they have nothing to do with me -- they're not even my plants! -- so there's no way I can make horrifying discoveries about them. And for this, we are grateful. 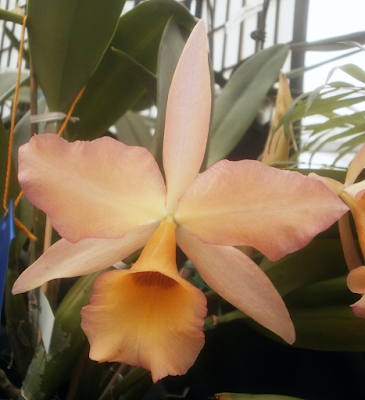 My memory of this bloom is a lot pinker and/or redder than what the photo shows; I don't know whether this is a problem with the camera or a problem with my brain. The camera is well-known to make up colors from time to time, but in this case I suspect my brain is the culprit. (When I'm at the shows, I'm generally trying to take a lot of photos as quickly as possible, and I think sometimes my memories get a little scrambled, where I mentally combine a plant with another plant that was physically near it, or that was photographed just before or just after it.)

Though I did find plenty of photos that were pinker (e.g. one, two), and I found one image of an orange Rth. Zul in a search engine, in two different places, but one link was broken and the other was to Pinterest, which I can't actually see via links because Pinterest really, really wants me to sign up for an account with them. So you'll just have to take my word for it that Rth. Zul can go a lot oranger than this too. 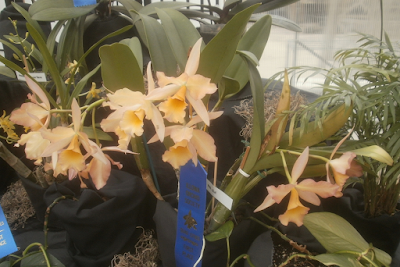 They're not normally this pale, though. We might be able to blame that on the camera.

In any case, it's, you know, nice. Pretty. Looks properly orchidy.

Haven't seen this one before, but it's half-siblings with a couple orchids we've seen previously: 2014's Rhyncattleanthe Lily Marie Almas 'MGR' and 2015's Jackfowlieara Appleblossom (also 2010). Not a huge resemblance in either case, but for those people who care about such things (it's not just me who finds orchid genealogies intriguing, is it?), there you go.

Glad you mentioned the parentage. I wondered if it was related to Appleblossum when I saw it. Btw, with the Catt family, there are those whose bloom color is affected by the temperature and light intensity present during bud development.