Hey, you know what we haven't had here at PATSP for a while? Terrible, despair-inducing news. But I can remedy that right now!

I've been a little concerned about the Schlumbergeras in the plant room lately, because a lot of the blooms I've seen in the last four weeks or so have looked kind of bad. Nothing extreme (well, I guess one of them was kind of a wreck, but a cool wreck, you know? You'll see that when we get to the post for Schlumbergera 092A.), really, just little patches of petal without pigment here and there.1 The affected plants seemed to be mostly the ones closest to the windows, so I thought maybe it was cold damage. Not that satisfying, as hypotheses go, because it'd definitely been colder in the plant room before and I hadn't seen anything like that, but it was the only explanation I could come up with.

Or, rather, it was the only explanation I could come up with that I was comfortable believing, because -- as you no doubt thought when you looked at footnote 1 -- that looks a hell of a lot like the thrips damage on the Anthuriums, doesn't it?

And then I started noticing the same kind of marks on some of the ripe Schlumbergera fruits, in an entirely different part of the plant room, where cold damage wouldn't make any sense at all. But I told myself, well, it could still be something other than thrips; after all, I've never actually seen a thrips on any of the Schlumbergeras, ever. For all I know, they may be immune to thrips.

Then on Friday 22 April, I saw a thrips crawling around on seedling 099. So I had a smoking gun. Can't deny it any longer. As if it's not bad enough to have been dealing with two pest problems for the last four and a half years, one of the pest problems has just gotten a whole lot bigger, and threatens to ruin the one group of seedlings that was still making me happyish.

Nothing makes the problem go away. Or at least nothing I can afford to do makes the problem go away, which is the same thing. It has occurred to me that if I had, back in 2012, just thrown all the plants in the trash, keeping only the seedlings I had in germination containers at the time, by 2016, I would have new seedlings starting to bloom now and things would be more or less back on track again. So I'm asking myself, what is 2020 Mr. Subjunctive going to wish that I had done?

The obvious problem being that, especially when it comes to the Anthurium and Schlumbergera seedlings, not only am I emotionally attached, but I've also created some plants that I would literally not be able to replace, ever, were I to throw them out. I've only gotten one seedling like 083A "Psychedelic Bunny;" that's probably not going to happen again. I only have the one 0330 "Faye Quinette;" who knows whether I would ever get another one. It would also seem unfair to throw out certain plants: the Euphorbia tirucalli has never had any pest problems; why punish it? 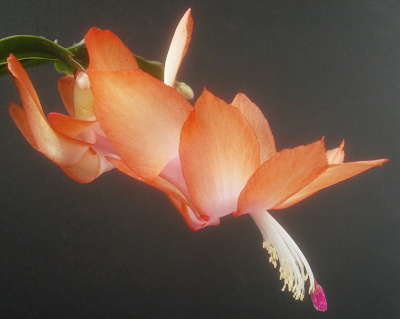 Seedling 013A was fine. Sort of a yellow-orange / pink, along the lines of 012A Sofa Fort or 028B Neon Like. I think there was only one bloom, so, you know, I don't have much to judge it by, and this was a couple months ago anyway so I don't even really remember it. I'm not feeling very playful at the moment, which is going to show up in the name options.

Despair is kind of obvious, I suppose, but it names the mood well.

So does Fuck Thrips, but that's probably even less commercially viable than Despair. 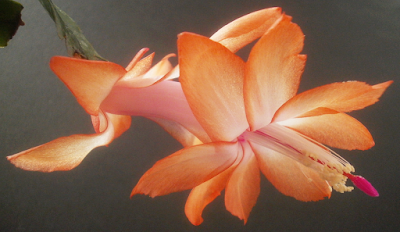 Sisyphus is sort of dead-on, and has the advantage of being a mythological reference. Those are always classy.

Oh! Or Tantalus, who was punished by the gods to stand forever (?) in a pool under a fruit tree, with low branches, which would raise up whenever he reached for any of the fruit, and the water in the pool recedes whenever he bends down to get a drink. It'd be perfect as a name if not for the reason Tantalus was being punished in the first place: depending on the story, his crime was:

• stealing ambrosia and nectar, the food and drink of the gods, and giving it to his people,
• cutting up his son, boiling him, and serving him to the gods (the son got better), or
• either stealing a golden dog (i.e., a dog, made by Hephaestus, out of gold) or hiding the dog on behalf of a friend who stole it.

None the crimes feel metaphorically appropriate to my situation, but Tantalus is much better known for his punishment than for his crime (the punishment is also the origin of the word "tantalize") so I could overlook that. I mean, if you look into the stories, people punished by the Greek gods often (but not always) had it coming.3

So. That seems like enough options to be able to choose one. 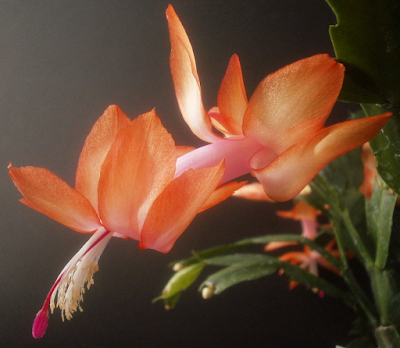 Fuck Thrips, though heartfelt, is out for obvious reasons. Downward Spiral is nearly the title of a nine inch nails album (The Downward Spiral), which is a good album and I like it but . . . no.

Hopeless and Despair are basically synonyms, and the latter is one character shorter to type, so bye-bye Hopeless.

If I'm being punished by the gods of Greek mythology, it's a lot closer to Tantalus than Sisyphus,4 we'll drop Sisyphus.

So that leaves Double-Bind, Despair, and Tantalus. They all kind of work, but, you know, look how much talking I've done about Tantalus here. I obviously want to name it Tantalus. So I will.5 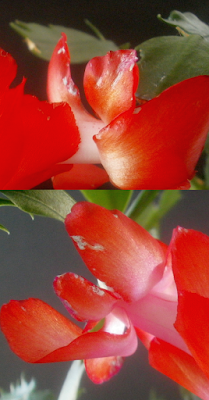 Top: 023A Stoked. Bottom: 066B Sigrid the Haughty.
2 Wikipedia: "A double bind is an emotionally distressing dilemma in communication in which an individual (or group) receives two or more conflicting messages, and one message negates the other. This creates a situation in which a successful response to one message results in a failed response to the other (and vice versa), so that the person will automatically be wrong regardless of response. The double bind occurs when the person cannot confront the inherent dilemma, and therefore can neither resolve it nor opt out of the situation."
In my case here, the communication that's causing the distress is coming from the plants: nothing ever actually works, but a lot of things do seem to help, or appear to work for a while. So the message is a mixed "try harder" / "give up" feedback that leaves me stuck between exhausting myself trying to keep up with multiple time- and money-consuming treatments or feeling the pain of throwing out plants that I've had for a long time and really like, some of which are literally irreplaceable.
I mean, you wouldn't think it would be possible to be in an emotionally abusive relationship with houseplants, but . . . here we are. Maybe Cleve Backster was right and they do have feelings after all.
Evil, evil feelings.
3 Sisyphus appears to have at least killed a lot of people, though that wasn't the only reason he was being punished, or even the main one.
4 I feel like with Sisyphus, the focus is much more on all the wasted effort: there's nothing inherently awesome about getting a boulder to the top of a mountain. While it's true that taking care of the plants involves a lot of work, discovering that there are bugs again doesn't turn all of the watering and whatever into wasted effort; I've still gotten something out of it, I'm not having to start over again from the beginning.
Tantalus strikes me as being more about the desire -- he could see and smell the fruit; the water's right there; they're both just out of reach. I'm always seeing blooms that would be fantastic if not for the thrips, I'm constantly having to discard Anthurium seedlings with great foliage, because they've got a scale problem. The suffering is all of the so-close-yet-so-far-away kind. Almost, almost, almost.
5 We'll put a pin in Double-Bind, though. 'Cause I bet that's gonna be useful later.
Posted by mr_subjunctive at 3:00 AM

I'm so sorry to hear this. Bugs on houseplants suck. I've got mealybugs going after my Hoyas right now. I've been spraying all the plants in the same room (18 of them) but the problem persists. I can't imagine how big your problem is! [well, I can, I've seen your plants but Sisyphus indead!]

Oh, and Thanks for your advice by email vis a vis the ficus. It didn't work but I appreciate the advice. I'm just not great at starting plants. Now I have to decide - do I search for a small variegated ficus to replace that one and grow it up or do I go a different direction with that spot... Decisions, decisions.

I am so very sorry about all this. Heartfelt condolences to you and the plants.