The original plant was a hitchhiker in the pot of a now-gone Rhipsalis NOID, which I carefully plucked out and potted up on its own, and it went from this 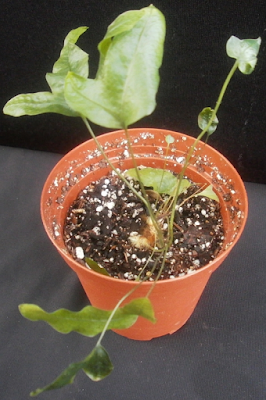 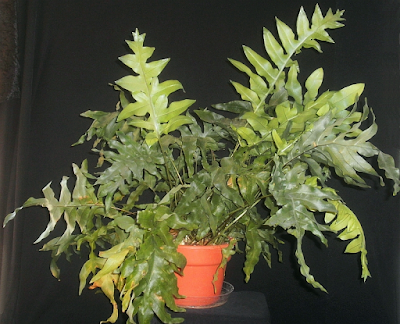 Not quite a year after that, I saw a couple scale insects on it, so I cut all the foliage off and sprayed some rubbing alcohol around or something. Two or three weeks later: 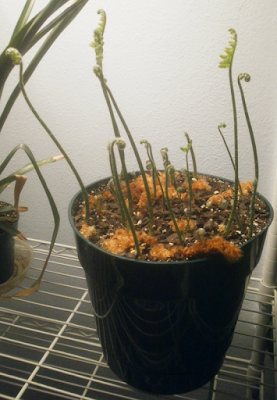 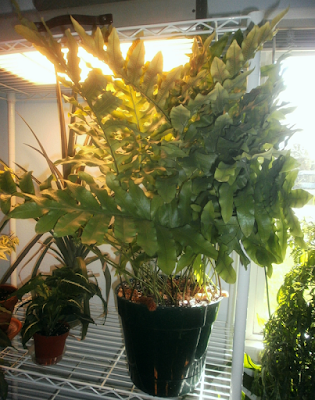 26 April 2014.
Just monstrous. I've recently learned that there's one exception to the remarkable speed, though.

I'm not sure when it started producing spores; my guess is the summer of 2013. I didn't necessarily want more of these plants (where would I even put another one of these plants, after all?), but you know me: I can't help myself. So I sprinkled some spores around in one of the Anthurium germination containers, and also in a separate sealed plastic container containing some potting soil, as an experiment. I think this was in September 2013.

And nothing happened. I'd done the same thing with Cyrtomium falcatum, earlier, and nothing happened then either, so I concluded that I was destined for greater things than propagating ferns, and forgot about it all.

So when something started coming up in the germination containers with the Anthurium seeds, it took me a little while to figure out. They didn't look much like the fern I'd started with: the fronds were so thin they were practically transparent, and the wrong color besides -- sort of a pale apple-green instead of the blue-green of the fully-grown plant. Wasn't 100 percent sure what I had, but when in doubt, pot it up and see what happens.1 So I potted up a banker's dozen2 in individual three-inch pots on 20 September 2015. I don't have any photos of them until 24 November; I'm guessing I didn't want to put the time into taking pictures if I didn't know for sure what they were or whether they were going to live. By November, though, it was clear they were ferns: 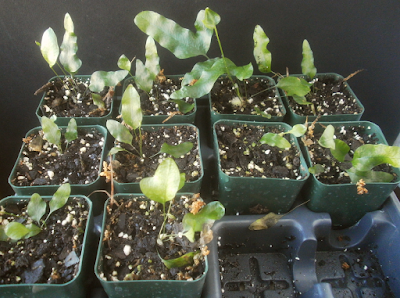 24 November 2015.
And it quickly became clear that these were the quick-growing monster-type ferns. Ten weeks later: 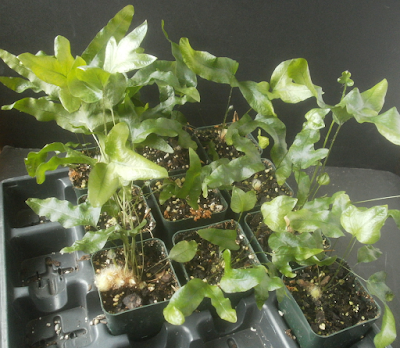 3 February 2016.
And by now, late April, they've grown so much that it's hard to get a picture of them all at once: 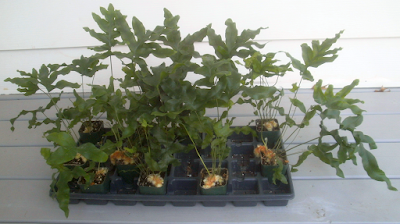 25 April 2016.
They've grown so much that they're already bending their pots out of shape 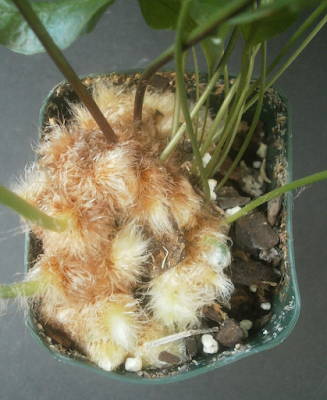 and their rhizomes are jumping over the pots' sides. 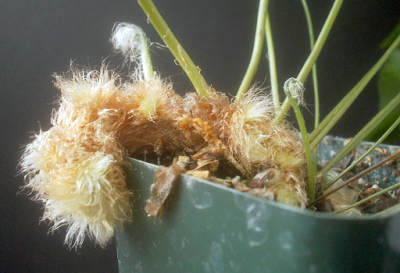 So I should maybe be thinking about moving them up to 4-inch pots already.

You may have noticed that I've avoided saying what they are. I've had some trouble settling on an ID. Obviously the original plant, as a hitchhiker, didn't have an ID on it. I thought for a while maybe it was Phlebodium aureum,
though I wasn't sure, because the only P. aureum I had to compare it to was my (since-deceased) P. aureum 'Mandianum,' which has a similar color but much rufflier fronds. There were other reasons to doubt the ID too; I no longer remember what they were, though.

And then I had an anonymous commenter do a drive-by to tell me that it was obviously a Laua'e fern (Hawaiian Wart fern), Phymatosorus grossus. Image searches seemed to argue against Phymatosorus, which has glossier, greener fronds, and also Phymatosorus is supposed to have a pleasant scent, which my plants do not. The arrangement of the sporangia seems subtly different, too, though it's harder to say exactly what's different about them.

In any case. After comparing pictures of the venation on Phlebodium aureum 'Blue Hare' (here) with the venation on my fern, I'm about 75% confident that I have P. aureum. If any fern experts are reading this and feel like weighing in, feel free. I'd look into it harder myself, but I'm kind of busy trying to figure out what to do with all these.3


1 The ones in the separate sealed plastic container with soil also started coming up at about the same time, which either means that they just take two years to develop from spores, or some freaky coincidence was happening. 'Cause they weren't in very similar conditions, aside from the high humidity: different temperatures, different light sources, different light durations.
2 (Most internet sources will tell you a banker's dozen is eleven, but in this case I mean ten. The joke works for any number under twelve.)
3 (I don't even know what to call them. I mean, they're not seedlings if there were no seeds, right? As far as I could find from, admittedly, a kind of half-assed search, there's no botanical, technical, or horticultural word for ferns analogous to "seedling." Any fern experts in the audience are invited to answer that question too; in the meantime I guess I'm going with "sporeling.")
Posted by mr_subjunctive at 3:00 AM

Could it be Nephrolepis biserrata? Commonly called 'Macho Fern'. I was given one and it's supposed to grow quickly, easily and can get fairly large. If I fail with mine, maybe you'll sell a few of the sporelings and I can try one of them :).

Glasshouse Works sent me one as a weed in an other plant that they said was Phlebodium aureum. I have TONS of offspring in Plalaeanopsis pots - terrible WEED!

I like "Sporeling", as in Sy Sporeling, Hair Club for Ferns!

I'm not a fern expert, just a bumbling enthusiast, but looking at the rhizome and unfurling fronds, it seems like a pretty standard Phlebodium aureum to me.

As far as what to do with them .... I'd suggest potting them up and selling them. You have mentioned before about selling some plants at a local farmers' market and this would simply add to your offerings. Particularly this time of year, as folks start hunting for plants to hang/put on their porch, it seems ferns become quite popular. (You could even put several in one large pot for the look of one huge fern.) For that matter you might even do if or your own home -- assuming you have a porch which doesn't get hit with blazing heat all afternoon. Course there's always "fleabay", and Craig's List. Wonder if your old job would take them as you might prove a cheaper source than whomever they normally use?

I can confirm Phlebodium aureum. I would also note that I have seen it become a horrible weed in potted greenhouse collections. It was particularly fond of hanging baskets. However, I doubt it has the right conditions to become quite that weedy in your house.

Supporting Phlebodium aureum. I have had one ('Blue Star') for a while now, and it looks exactly like yours, except the rhizomes are a bit brighter gold and the leaves have the cultivar's bluish grey cast.

Plus, the habit of starting with finger-like fronds as a baby plant and developing more and more lobes in new fronds as the plant matures matches P. aureum.

This looks familiar. I had one or two... or eleventy sporelings pop up in an Acronia I bought. I of course had to grow them out and see what they were. Now they're everywhere! I thought it looked like Phlebodium aureum too, although the vendor I bought it from seems to think it's a Pteris. She might be confused about which fern I meant, though, since the final tally was 5 different species of ferns as hitchhikers in that orchid.

I always thought ferns would be too difficult and avoided them. This post inspired my to pick of a blue star fern and give it a try. Thank you!