Finally, another good Anthurium seedling. The blooms are similar to, but smaller than, those of 0805 Triana Hill. Just as with Triana, the spathe was a better color when it first opened 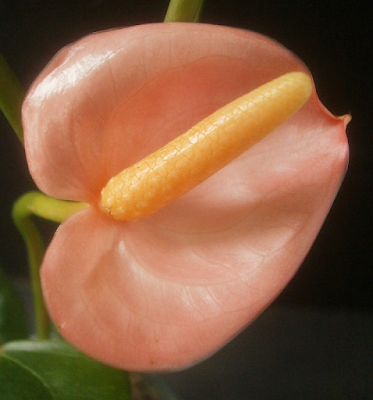 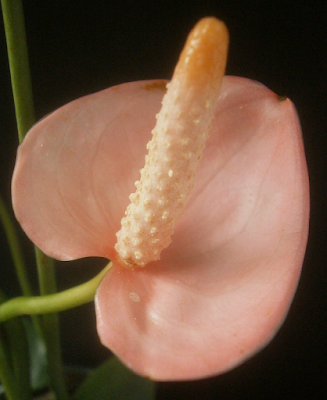 7 July 2016.
but that just seems to be how the peach-leaning spathes work: 0097 Colin Ambulance, 0328 Polly Esther Blend, 0596 Alisa Summers, and 0805 Triana Hill all get more pink and less orange with age, to varying degrees and at varying speeds.

Brad's foliage is less abundant than Triana's, with a lot less suckering, 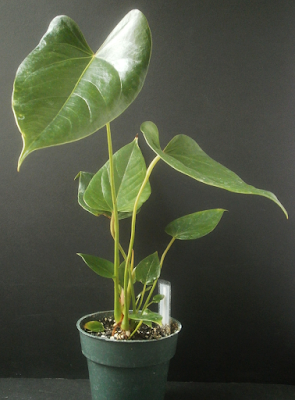 but so far, at least, the few leaves present are unscarred, and have an interesting texture besides (maybe the texture is why there's not as much scarring?). 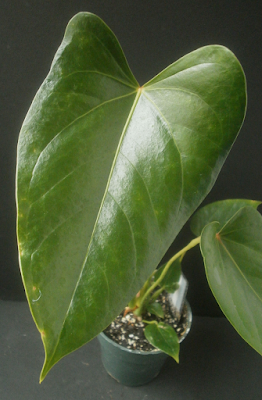 Brad's definitely a keeper, in any case. Even if the spathes never get any larger, the bloom color is interesting enough that I look forward to seeing what it can do, genetically. A couple of the other peach-bloomers have produced viable seedlings now,1 but the more sets of genes in the mix, the better, I figure.


1 Both 0097 Colin Ambulance and 0328 Polly Esther Blend have produced some seedlings. Neither group has been potted up and made into official seedlings with names and ID numbers yet, but it's only a matter of time: Colin's are from June and July 2016, and Polly's are from March, May, and June 2016. Some of Polly's really should have been moved into their own pots a long time ago, but I just don't have anywhere to put them.
0596 Alisa Summers has been pollinated, and is working on berries, but they're developing veeeeeeerrrrrry slowly.
I've been trying, but there's no evidence of pollination on 0694 Brad Romance or 0805 Triana Hill yet.
Posted by mr_subjunctive at 7:59 PM