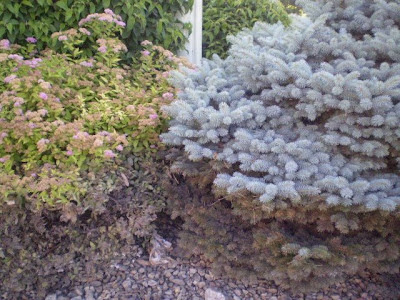 How high do you suppose the water got here?
I know, like Iowa didn't have enough to deal with -- mold, dead animal carcasses, memory loss. But now there's another angle that I bet you haven't considered: can you eat produce from a flooded garden?

Gardeners should keep in mind that although pathogens will eventually die out, they can remain present in the soil for several months. If the homeowner knows the area was contaminated with sewage, it is recommended that no produce be used from the garden for at least 90 days.

Remember, as always, fruits and vegetables should be thoroughly washed prior to consumption.

There's more detail at the original article, but, yeah, basically the answer is no, especially for lettuce and similar plants that can't easily be cleaned (though they do say that you can cut them back and eat the regrowth, if that helps). Hat-tip to Aetiology for the article. 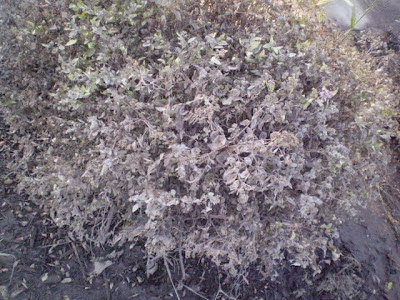 Not a garden, just a shrub. But I'll bet there are gardens around that look like this. We also have a lot of exciting new smells in town, all of which are bad.
But wait! It can be worse than that, because soybean and corn crop losses are going to affect you (at least, those of you who are Americans, and probably some of you who aren't), because the loss of what corn crop there was (it had been a difficult year already) means that food prices are going to be going up, up, up:

When you’ve lost an early crop (like corn) to damage or flood, and it’s too late to replant (as it is now) the same crop, then you plant soybeans. This is just SOP.

The only issue is, this year, there already has been a shortage of seed. Now with corn acres being diverted to soybeans, and existing soybean fields needing replanted, the problem is worse. (from Sadly, No!: you are encouraged - nay, exhorted - to click through to read the whole thing, which makes somewhat more sense than this little excerpt. I didn't feel right about copying the whole post. Don't worry, it's not that long.)

And of course as corn prices go, so go milk prices, and gas prices, and meat prices. I would so not want to own a restaurant right now.

Posted by mr_subjunctive at 4:41 AM