Of the gazillions of seeds I got from seedman.com, back in April, very little seems to be working out so far. I got four Echinopsis peruviana seedlings still, which aren't really making any huge strides in any particular directions but which have, at least, grown enough to have their first thorns: 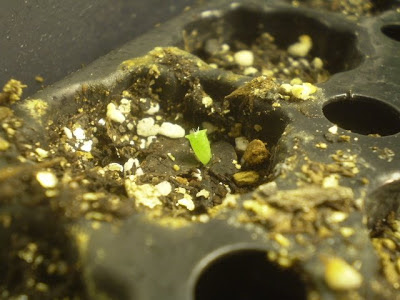 Photo: 30 May 2008
And then I got ten of the Ficus religiosa seeds to sprout, by bringing them to work, this being the biggest one: 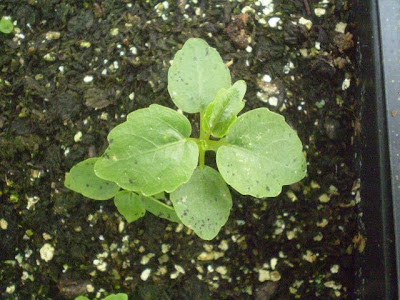 Photo: 31 May 2008
Since I don't need ten Ficus religiosa seedlings, I was planning on bringing two home (one good one, and a spare in case something happened to the good one) and then leaving whatever else sprouted to be sold at work, kind of as payment for letting me use the space there.

The sucky part is that that's all there's been from the GASP (Great Annual Seed Project) so far. And I know the seeds, a lot of them, were supposed to be uneven germinators and everything, but I really thought I would have seen more than this by now. I'm not giving up on it, just disappointed. But I'll try to be patient, I guess.

It is just too cool when you can grow your own plants from seed. I just found some aeschynanthus seeds on one of my plants, can't wait to start them.

I hate the seeds that can take time to sprout too, they normally don't last too long around here.

Some say that the ficus religiosa seeds do better when digested by birds. ;-)

It actually wouldn't surprise me at all.

I found an India based company on Amazon that shipped 500 seeds for 5.00 us. Twice I've scattered seeds over jiffy seeding mix in a jiffy greenhouse and they grow like mad. I remove the lid at least once daily for fresh air, and keep it in indirect sunlight. I now literally have hundreds of.these trees. Overwhelming really.