Aglaonema brevispathum is charmingly weird. Imagine you took a regular healthy-looking, foot-and-a-half-tall Aglaonema and, keeping everything else the same, shortened just the stem down to about an inch tall, tilted the stem sideways, and buried it under the soil. That's approximately how A. brevispathum works.

I'd never even heard of them until last December. Always game to try a new Aglaonema, I asked the boss to order a box for us, and she did, and initially I was . . . not blown away. But they've grown on me, to the point where I bought a second one in the Asiatica order a few weeks ago.

All of which is to build up to the revelation, which you know already because you read the title, that we have one blooming at work at the moment: 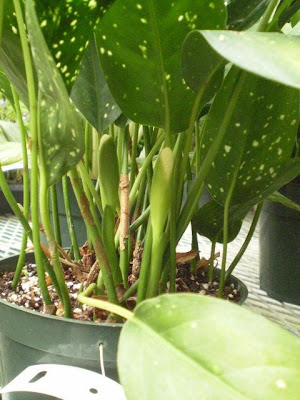 This is also kind of like a normal Chinese evergreen, but oddly compressed: as best as I can tell, there's no actual space between the spathe and spadix; it's like the spadix has been shrink-wrapped in the spathe. This may not be permanent; the flower is still relatively new. But for now it's kind of strange: ordinarily Aglaonema flowers are more like those of Dieffenbachia (picture here).

The only other plant I can think of with this kind of shrink-wrapping is Alocasia 'Polly,' and I'm not positive that the Alocasia flower I've posted about previously was normal.

I was just doing a Google Search and came across this little plant on your Blog. I used to grow this plant. We always called it "The Worlds Greatest House Plant" It was one of the greatest performers to low light situations and could take abuse. I am glad to hear it is still around!