The last time I watered everything, I noticed this, and I'm wondering if anybody could explain it. If I didn't know anything about the plant's history, I'd suspect fluoride damage, but A) I do flush the soil pretty heavily at every watering, B) I don't use a fertilizer containing fluoride, or at least I don't think I do, C) it seems weird to me that it's only on just the two leaves, instead of the whole plant. 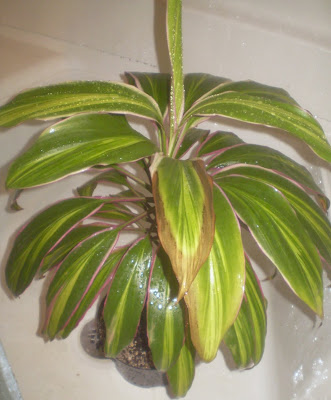 I guess I'm mostly concerned that this is from cold (although I think the temperature in the plant room has stayed above 60F/16C, I'm not positive about that) or chemicals (the process of putting a bathtub in the plant room is ongoing; every step appears to require some kind of solvent or adhesive or whatever). It's also only just the two leaves you can see in the picture, which makes me think it's probably something other than fluoride (which I figure would affect all the leaves). But I'm not sure. Anybody seen anything like this before, or happen to know whether Cordylines are sensitive to chemicals?

In other news, as I write this (Sunday morning), we've got a major snowstorm predicted for Tuesday and Wednesday. More or less a blizzard, in fact, if the National Weather Service is to be believed (and I usually do). Winds 30-50 miles per hour, something like 6-12 inches of snow, adjectives like "historic" and "dangerous," warnings of widespread power outages, etc. I wasn't under the impression that twelve inches of snow from a single system was necessarily enough to shut down civilization entirely, but it's also probably more than I've seen out of a single storm for several years, so I could be wrong.

We're ready for it, in any case. Getting the generator ready to go, cancelling Wednesday appointments in Iowa City, etc. I just hope that the storm actually is as bad as all that, because if we go out of our way to prepare for it, then it really kind of owes it to us to be hardcore. It's happened before that I've gotten all excited because we were about to have weather, and then when it actually arrives, it's not exciting at all, and I get all disappointed. (This happens to me, for example, about five to ten times every tornado season.) So if we're going to do this, let's do this.

I mention all this partly because it's interesting (isn't it?) and partly because I want to have an explanation up in case I'm suddenly unable to respond to e-mails and blog comments on Tuesday/Wednesday. I mean, odds are it won't come to that, but if it does, just know that if our generator is working, then I'm probably having a good time. If it's stopped working, then I'm having a completely miserable time. Either way, I have posts written ahead through Thursday or Friday, so PATSP, like my heart, will go on, whatever the weather does.

Labels: Cordyline, other, question for the hive mind

Here's hoping you get enough snow to be exciting and awe inspiring, but not enough to truly endanger anyone (it's a delicate balance).

I'm with you on wanting some wild weather! Being snug at home with someone you love (the husband) and something you enjoy doing (tending to your plants) is the best!

We got an unexpectedly heavy snowfall on Saturday. Heavy, as in weight, not amount. It didn't look like much in Washington, where I work, but when I got home to the Virginia suburbs, I found branches broken off my loquats, jasmines, and hibiscus plants. (Only a light dusting had been predicted.) I was sorry about the plants, but happy to drink a mug of cocoa and look at the beautiful white blanket.

Apparently we're getting the same storm in Wisconsin. I, too, hate it when they promise 10 feet of snow and we get 2 inches. You'd think we'd be happy to get less, but it's a let down. Not sure why. Two years ago we had the second snowiest winter on record. Hopefully we're not on that track again!

Haha, good luck with your storm and your generator!

We've got about a foot and a half here and still falling, and it wasn't enough to shut us down - but then, it's Colorado, so we rather expect it. ;)

It did knock out the power, though, and necessitate moving my Musa 'High Color Mini' further from the window.f

If that's the same storm that just rolled over the West, you won't be disappointed. Here in the Phoenix metro area thousands of people were without power, and it wouldn't surprise me if some of the wind gusts I heard last night were in excess of 50 mph. Flagstaff got 20" of snow in one day -- that's a lot for them.

Well, as you well know, we got a good load of snow dumped on us yesterday. You're certainly welcome to it, although it's not as much fun without a good snowstorm or blizzard.

I had the same problem on my Cordyline a few years back, but was never able to determine what the problem was.

I'm doubting floride too -- usually it is just the very tip of the leaf, and can't imagine how it could effect just two leaves.
I'm guessing chilling damage -- lots of tropical plants can be damaged by temps in the 50s -- Are the damaged leaves on the side closest to a window or other source of a draft?

The forecasters aren't backing off so far. NWS says "IT HAS BEEN ABOUT 10 YEARS SINCE SNOWS
AND WINDS OF THIS MAGNITUDE AND EXPANSE HAVE BEEN SEEN ACROSS THE
AREA. STORM STRENGTH IS ANOTHER MATTER. IT HAS PROBABLY BEEN
20 TO 30 YEARS SINCE THE IMPACTS OF A WINTER STORM OF THIS
STRENGTH HAVE BEEN SEEN IN THE AREA." (Yes, the NWS shouts all the time. Annoying.) So fingers crossed.

Not only is it nice being at home during snowstorms, but it's great for the houseplants, when there's snow on the ground: waaaaaay more light bouncing into the house.

It was a near-record year here as well. Didn't really seem like it to me, though: we must have had a really big snowfall the winter before my family moved away from Iowa when I was a kid (would have been the '84-'85 winter), so I keep expecting every winter to be like that, and am always disappointed when they're not. So '07-08, to me, just felt like what we were supposed to have gotten all along.

We're not unused to it here, but it's unusual to get so much all at once. Also we usually get a couple practice snowfalls before anything really huge happens, and that didn't happen this year.

Well, they're predicting wind gusts around 45mph for tomorrow, so losing power is a definite possibility here. Fingers crossed that that doesn't happen, even if we are prepared for it. (Suddenly especially worried that it will happen overnight while we're asleep.)

But your Cordyline did get over it, eventually?

It's definitely a possibility; I didn't notice the leaves until after I'd already brought the plant to the shower, so I'm not sure which direction they were facing when I picked it up. The plant room had been fairly cold, until the last couple days: the husband noticed that there was cold air leaking into the room where the walls meet the floor, so he ringed the floor with insulating foam and it's now much warmer in there. (We're really lucky to have caught this when we did, too.) Hopefully, it was just cold, and it won't happen again, but I'll definitely be watching closely now.

To me, the isolated problem looks more like environmental damage, rather than something systemic.

And we're bracing for the same storm up here in Toronto... windy, windy, windy. I can hear the trees talking about it now.

Yup, my cordyline did get over it. I simply cut away the damaged areas; the plant did just fine after that. Still. It would be nice to know what it was complaining about. One thing's for sure in my case: it couldn't have been fluoride because in my previous city there was no fluoride in the water.