Don't get all excited. It's not actually a blue Begonia in the way you're thinking. Though that would be cool, and I encourage somebody to create one like what you're thinking someday.

What it is is, I took some pictures of my 'Coffee Texas Star' (which might also be several other things, including 'Gladys Meyer:' I've run into at least four differently-named Begonia rex-cultorum cultivars that all look more or less exactly like my plant.) on Tuesday for the "yearbook." Because I never know how the light is until after I've uploaded the photos, I took some pictures with the flash, and some without. And in every single one of the photos with the flash, I got blue iridescence off of some of the leaves, particularly the leaves that were most directly facing the camera. Or maybe it's more turquoise than blue -- 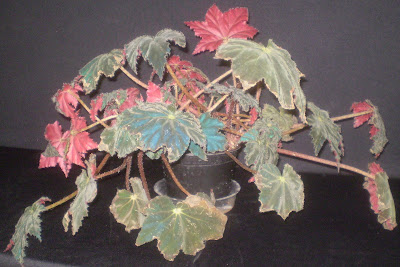 See? Above, with the flash; below, without: 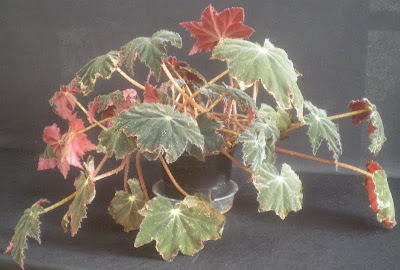 And a close-up of the blue part, just for shiggles: 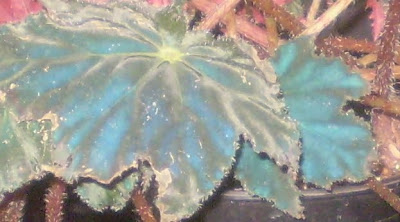 So I was thinking, wow, that's weird, I wonder why I've noticed that before. Maybe it's something specific to the flash on this camera. So I got a flashlight, and shined1 it at the plant, and when the beam hit the leaf more or less perpendicular, I did see a little bit of turquoise bounced back at me, so long as my eye was more or less right behind the flashlight. Which looked approximately like the above picture.

So I guess it's a real thing. What does it signify? How does it help the plant? Or does it help? What structure or structures within the leaf are responsible? Do all Begonias do this? What does it all meeeeeeeeeaaaaaaaaan?

I have no idea. But it happened. You know the blog's title.

1 I know. It sounds wrong to me too. But the internet says that if there's a direct object, "shined" is correct, and without it, it's "shone." So I shined the light on the Begonia, but yesterday the sun shone. This sounds really stupid and wrong to me either way, and I'm actually more, instead of less, confused by the direct object thing and should probably have rephrased the sentence as, "So I got a flashlight, turned it on, and aimed it at the plant," but that sounds kind of clunky too. So I think I'm just going to swear off flashlight-related writing after this post.
Posted by mr_subjunctive at 2:30 AM

I felt like I'd seen this before on Hort Log, but the above link, while fitting-ish, is not what I remember. If I stumble across it I'll recomment.

I have no idea how or why it would be blue, but it sure is pretty!

If you'd said, "So I got a flashlight and aimed it at the plant," I think that the flashlight was on would've been implied enough for most folks. I'm glad you didn't use shone, because it's an uninteresting word.

Cool!
I was unaware about the whole direct object thing around the use of shinned and shone. I just go with whatever sounds right to me. English is a very unwieldy, complicated language.

I don't know if it's the exact same one, but we call ours "Black Coffee".

LOL...shined/shone...def a word I've always had issues with! A blue begonia...yeah, I got excited!