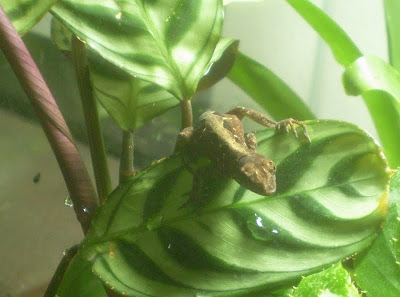 In case you've wondered: the reason why I don't take pictures of Nina sitting on any of the other plants, the reason why it's the Stromanthe every time, is because the other plants have mostly ceased existing. The Vriesea remains, and you can usually see it in the background of the Stromanthe pictures. The Impatiens is still there, too, though I've had to cut it back a few times, so it comes and goes.

Everything else is either entirely gone or only technically present. The Peperomia caperata got too wet, plus shaded out by the Stromanthe. The Cryptanthus have, for the most part, been dug up before they rooted -- they're still in there, but they move around a lot. I'm not sure if Nina is responsible, or if it's the crickets. Or both. The Podocarpus was nibbled by crickets, shaded out by the Stromanthe, and then got alternately drowned and parched: I don't know if it's still technically alive or not, but I haven't taken it out yet. The Pilea depressa never really took off like it was supposed to, though bits and pieces survive. I've tried adding new stuff a few times, but so far the only one that has even maybe worked is a Saxifraga stolonifera, which I haven't even been able to get all of those to work out.

So I guess it's a kind of rough neighborhood for plants.

There's been talk of using the tax refund to get Nina a new, larger home (perhaps Felipe could even join her!). Still just talk at the moment, as I haven't priced any and don't know how much money will end up having to go where. But it's under consideration. And it would be an excuse for new plant-shopping.

Stromanthe? Isn't that a Maranta ?

Oooh! Terrarium shopping. Got to love it. ;D

Or hate. It all depends.

We're actually looking into an Exo Terra one right now for Timmy, with doors on the side rather than just one top opening.

Might be a more convenient choice if you want to poke at the plants, as well?

It's a Stromanthe 'Burle Marx.' (Or sometimes burle-marxii. Depends on who's IDing.)

Diana/ Garden on the Edge said...

I've used Exo Terra before (with tree frogs) and LOVED them. The doors on the side make it so much easier to clean/ rearrange, etc.

Good Luck and give Nina a pat for me.

If you want to invest in a bigger terrarium, in fact, you should invest into height, and not really anything else. Anoles are tree-dwelling lizards and a low but long or large terrarium won't be seen as very spacious to them.
Zoo-med's Naturalistic series (or Exo-terra's All-glass series, the only difference being 2 front doors instead of just 1 large) are perfect for beautiful plant (and lizard) display, plus the front door much appreciated usefulness.

And here I thought it was just because Nina knew how good she looks with the Stromanthe as a background. ;-)

Well Diane beat me to the suggestion of Craig's list, LOL! You might also check out a local Goodwill or Salvation army store. Once in a blue moon they actually do get things like that in. If your hemming and hawing should take you to spring, you might also check out garage sales. (I actually wound up with my 90 gal terr tank that way. I was on my way to a friend's house and just happened to glance at a garage sale as I was driving by..........)

Contrary to what Zei has said, sagrei are trunk-ground dwellers (there are even some anoles that are semi-aquatic!), so while more height than a 10 gallon aquarium would be appreciated, ground space is also worth considering. Unless you get a rather large setup I would also urge you to leave Felipe in Florida.

*Finally found the ï, sorry I missed it before Zeï.

So what does Nina do for fun, when she's not modeling or hunting (or sending telepathic messages to Felipe)?

Well, ideally, I was hoping for something that was bigger along all dimensions, though it occurs to me now that I already sometimes have trouble locating her, and more room to roam in means more room to get lost in, too. I don't know. It may not happen anyway. It seems like it would be a good idea to get a larger cage, but there are lots of other things that seem like good ideas, too.

Damned if I know. I don't very often see her doing anything, and when she is, it's usually just climbing up one of the plants. I don't think anoles are what you'd call highly goal-oriented.

I have to implore you, Mr. S, to not pass up an Aspidistra elatior. It is MUCH stronger than the lurida. I am shamed to admit that I have killed most of the aspidistras offered by Asiatica (not a small loss on any count), and find many of the other species, including various lurida clones, lack the resilience of the elatiors. All cast iron plants may be aspidistras, but all aspidistras are not cast iron plants!

Thanks for the information you provide.