I had planned to spend all day yesterday diligently working on the blog and/or watering, because both of these are things that always need to be done, and experience has proven that when things need to be done, it works out best for me if I do them. I even had a specific post idea in mind. (I won't tell you what it was, but you would have found it brilliant.)

But then the husband said he wanted to go to Iowa City for something or another, and I have that pending tax refund burning a hole in my pocket, and this is the time of year when my former employer puts everything on 20% off1 in order to move stuff out the door and make room for the annuals.2 So this was my moment to buy anything I'd seen in the last six months that I really wanted and hadn't already bought.

And yeah, I know the pictures aren't great. I was in a hurry and the light was crap. Only so much I can do.

Two of the four plants have appeared on the blog as walkaways already. Anthurium podophyllum (which if you've not yet seen pictures of what A. podophyllum is capable of becoming, you should) -- 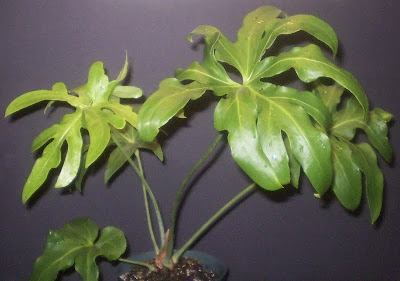 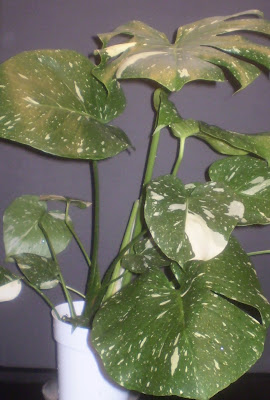 -- were both from Walkaways Part 4. (The Monstera returned later, for an unfinished business post.)

I hadn't really intended to buy the Monstera, originally. I walked away from it just fine the first time, no pangs of longing and regret, it was totally cool. But then I did the unfinished business post, and Karen715 pronounced them "to die for" in the comments there. Apparently Karen715 has the power to change my reality merely by saying that something is cool, 'cause after that, I started thinking, well, they're not so bad, and I bet I could find someplace to put one if I come into a lot of money someday. . . . So the Monstera is her fault.

Which we are okay with as long as she promises to use her powers for good.

I also picked up a Eucharis grandiflora, even though I already have a Eucharis grandiflora, because . . . there were a bunch of them blooming, and they had this really nice 4-inch one that was way nicer than the 4-inch one I've got at home, and -- well, and I got caught up in the moment. Though even that one, I'd considered buying before, so it was also a walkaway that I came back for. Technically.

And then finally, a kind of NOID. It's an Aloe, I'm pretty sure. WCW had told me last summer that the only identification they had for it was "hedgehog aloe," and when I look up "hedgehog aloe" on Google I get the ID of Aloe humilis. The problem is, the pictures I get when I look for "Aloe humilis" don't look a whole lot like this particular plant; the main difference is that the on-line pictures have a lot of bumps on all sides of the leaf: front, back and margins. 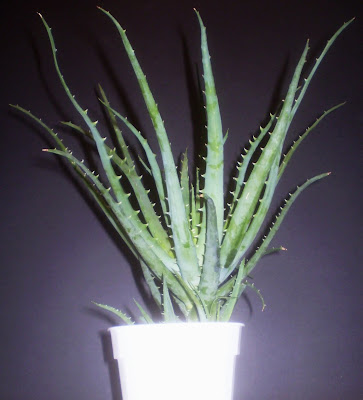 My plant does have two bumps on the upper leaf surfaces, but otherwise, they're all on the margins. Which makes it all kind of ambiguous. So I think it's probably Aloe humilis, but I am far from confident about that.

The reason for buying it doesn't make a lot of sense either: I kind of felt sorry for them. They haven't sold well for the store: I don't think it's any fault of the plant, just that they got too many of them. But so regular readers may be aware of my soft spot for plants that nobody else likes (e.g.), and I guess this is another case of that. The actual thought process was something like, Aloes and I get along well, this is one I didn't have already, and it has three offsets. Which put it over the edge.

Contrary to what you might think, I'm not ordinarily quite this much of a pushover for new plants: there's a guy in my head who processes all new-plant requests and tries to talk me out of them (Do you have a specific, available physical location in mind for this? Do you already have one of these, or anything that is strongly similar? Could you find it cheaper somewhere else? Do you have reason to think you'll be able to keep it alive for a year or more? Do you actually have the money physically on your person? Could this money be more productively spent elsewhere? Etc.), and I gave him the day off.3 He's back on the clock again at least until I receive the tax money, but I figure I'd been good for quite a while4 and deserved something new.

If anybody thinks they might need his services the next time I give him the day off (I'm pretty sure it'll be no later than the end of March), send me an e-mail.

1 Except for the things that don't count, an exception which is mainly there to cover the highly-desirable blooming stuff (Phalaenopsis, Cyclamen, Primula, etc.). This was annoying to have to describe or explain to customers, but I have no problem enjoying foliage plants, and actively dislike some of the bloomers which don't fall under the discount, so it's not much of an issue for me personally, as a customer.
2 This is a lot of the reason why the bloomers don't count: the flower shop has one table's worth of space in the greenhouse regardless of what's in the rest of the greenhouse. So there's no need to sell them any faster than usual.
3 Easier said than done, of course, since I then had to field questions from him for half an hour about whether giving him the day off was a good idea.
4 (Seriously -- my last new plant purchase was December 13, more than a month ago. I am the very model of restraint.)
Posted by mr_subjunctive at 2:30 AM

I want that aloe! On the other hand, I suck at them. I had an aloe disaster. My bedroom has a condensation problem, I put it in the window for the best light, the condensation leaked into the pot and, well, yeah. It and its offset are currently callusing up, rootless, to be stared again in some nice dry soil far away from condensation.

December 13? Over a month ago? !!!???!!! Send that monitor fellow over here when you give him a day off. But yes, me too, I also love the aloe. They love me too, it's reciprocal, which leads to the other problem of too many and too large and little pupkins hanging around which I truly don't have room for. Right now the modest flowers in residence here aren't doing it for me and I am ready for something flamboyant (orchids would do it) and that I can justify not maintaining for eternity (orchids would do it again), not because they won't live that long but because I know they won't live that long here!

You'd think I might have another suggestion for what it might be. But I've found that IDing small aloes without the blooms is nearly impossible, what with the hundreds of aloe species and how different they can look small than when fully grown.

Let us know when it blooms....

Does that guy in your head help one not take in plant rescues too?? if so I think I could have used him the other day. LOL

Do you have much experience with Rhipsalis (Mistletoe cactus)? I took one in that is in sad sad shape.. ( i Posted about it on my blog http://mamafey.blogspot.com/ ) any help with this would be greatly appreciated.
Ma Fey

What fun, a plant buying spree. I'm the same way about buying things. The little guy in my head is lucky to get any time off :)

::Turns away, rubs hands together and plots next move::

That Monstera is still to die for.

You got the 'Cheesecake'!

I have a contact in South Africa who IDs my unknown Aloes. He's an expert, and seems to know all. Send me an email if you would like his email address.
Aiyana

Mmm, Philodendron Cheesecake! So awesome. Mine came in the same white pot, in the same size... there must have been a big batch of them sent to the Midwest recently. Cool kids only!