Hey, remember that blizzard, the one that got me all freaked out because the plant room got cold, but then it turned out not to be much of a blizzard at all and I was kind of disappointed?

I think I've been adequately compensated for that now. 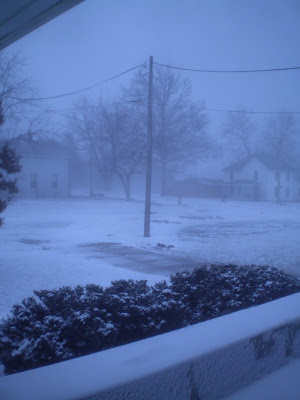 The view southeast from the front door.
Three days ago or so, the forecast was for an inch of snow on Monday, followed by some wind Tuesday. This was mainly of interest to me because it was supposed to get really cold at the same time -- down below zero again -- which we'd been getting kind of a break from that over the last week or two. So that was kind of unpleasant. But still -- an inch of snow. How bad could it be?

And then on Sunday they changed the forecast to two inches of snow, but that's hard to get terribly excited about too. So then Monday arrived.

Outside my office window, the neighbors have parked a lawnmower. It's maybe thirty or forty feet from where I'm sitting. Black and red, on a snow-white background. It's as full-daylight as you can get on a totally overcast day. And I have been intermittently unable to see the lawnmower. 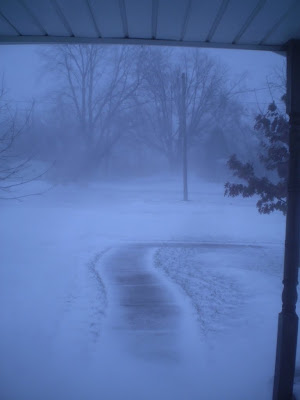 Due east from the front door. (I was going to take a west-facing picture of the back yard, but my body refused to go through the door when I opened it, so I settled.)
So this is kind of awesome.

I'm still not nuts about the plunging temperatures, but this is a totally acceptable blizzard. Four out of five stars. (I'm withholding the fifth star because I can, after all, still see the lawnmower. And also two inches of snow is not very much. For five stars, you need at least 12 inches / 30.5 cm of snow.)

That's a pretty cool winter scene. But you're right, you need about 10 - 12 inches of snow for a five star rating. Still. You have some impressive winter weather there.

Maine weather is impressive, but the only place I ever had to abandon a car and seek shelter in a farmhouse was Iowa. The Iowans made a big impression on me when I woke in the morning and discovered nearly 30 people sleeping on every surface and the woman of the house draining her hot water tank to make soup for us all. It was afternoon before any of us could even find our cars, let alone dig them out.

Writing from London I can hardly believe the weather you are experiencing. Even after the recent weather we experienced in the UK, what you now have looks a pretty impressive blizzard to me. I feel frozen simply looking at your icy pictures.

Brrr! I much prefer our weak little snow storms that cough out a few flakes and then move on to Texas. But I'm glad you're happy!

We sort of need a good blizzard once or twice a winter, don't we? We haven't had a real get down and boogie snowstorm yet this winter, not to our usual standards, but last night had a mini Chinook, with springlike temperatures and torrential rains. The January thaw only pleases me if it's sunny, which it's not, yet anyway.

Where I'm from this is a 5 star snow show!

Nova Scotia gets chinooks? I thought only Alberta did. :P

Oh, remember White Juan, jodi? THAT was a blizzard. I was in Winnipeg for the storm, but I was back for the tunnel-fun aftermath (and the professors on strike).

Mr. S, you make me jealous with all your weather. I so quickly forget the blizzard we had last month in DC. I just need more frequent activity from my winter, I guess, in order to feel that the chill days are worth it. Otherwise, what's the point in it being cold?

I guess everyone is from warm parts, because I look at that and think mild. When I lived in Kansas there were almost always a few days each winter with at least a foot or two of snow to dig through, and here in New York there've been at least one or two days of snow each winter that hit the 6-10 inch range.

Geez, so negative. Way to harsh my buzz.

We've had bigger snowfalls, including a couple in the 6-12 inch range. And I enjoyed them, but the seriousness of the blowing snow was what made this fun for me. The "blizzard" in December had way more snow, but never got to really blowing properly. This one felt more like a blizzard, even though we didn't get much in the way of snow.

I certainly didn't mean to harsh your buzz. It's just that... I can still see sidewalk. And grass. For me, "blizzard" has a very strong connotation of at least not being able to see ground as well as a good swirling, windy above-ground experience. Admittedly your type of blizzard is far more convenient!

Ha ha , funny. Come live where I live, northern BC Canada. Winter goes on for so long, blah blah blah, you forget what the world looks like when it is unsullied by snow.