We saw a flower bud beginning to form on this plant in January, and ever since, I've been patiently waiting for the flowers to appear. I hadn't seen this before, even online (not a clear and detailed picture, anyway), so I wasn't sure what to expect, but based on its relatives (Tradescantia, the other Tradescantia, Cyanotis), I was expecting little three-petaled flowers that would last for a day, and based on its name ("fragrans"), I expected the flowers to be scented.

Some of this turned out to be correct. The first flowers opened for real on Valentine's Day, and were not three-petaled (at least not obviously so), and I'm not sure how long they actually last. 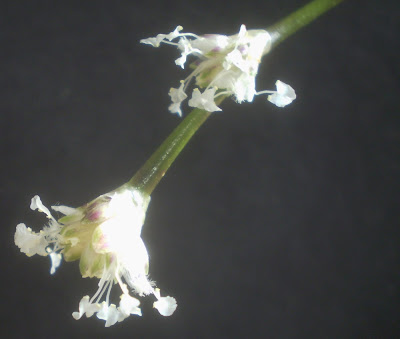 But they were scented. It's a lot less intense than I had expected. Three sites on line claim that the flowers smell like honey, which . . . um . . . no. I don't think so. I mean, maybe they develop a honey smell over time or something, but at least for the first few days, they smelled more or less like hyacinths, though much less intense. Hyacinths that are very far away, maybe.

The flowers also open and close daily: I'm not sure when they open, but by about 4 PM, they look more like this: 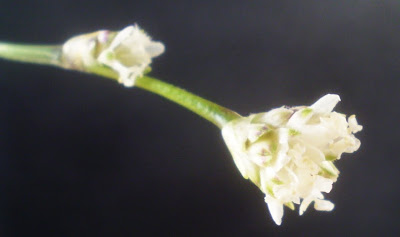 Also, scent production seems to shut down around 4 PM too, though you can still smell it a little. It's not clear whether new flowers open and close every day, or if some of these are opening and closing several days in a row. (Individual Tradescantia flowers, I believe, are only open for one day: they just make a lot of them, in the same place, over and over, so it appears to be the same flower multiple times.)

The Callisia flowers are on a long stalk (maybe 18 inches / 46 cm?) that bobs around relentlessly if there's even the slightest breeze, so they're a pain to photograph. To get the two pictures here, I had to take about 60. They're also so small by comparison to the plant that there's no good way to take a photo of both plant and flowers simultaneously, which is why there isn't a picture like that here.

Little bunches of flowers appear at intervals down the stalk; so far, there are two on the stalk that have actually opened, and another two that look like they're still developing.

That's about it for the report. If they start smelling like honey, I'll be sure to let you know.

Oooh, I've never seen those before. Honey smells seem so divergent to me, so I like the Hyacinth comparison. I can wrap my nostrils around that.

Interesting. I always knew tradecantia to be a perennial and they look nothing like this.

Very nice. Delicate, tiny and simple. I agree with Anonymous...

Stunning picture of the flowers, will definitely make my day. Keep posting.

The photos have definitely made my day, Sorry to hear their scent is not up to your expectations.