I got an e-mail a couple weeks ago from someone who wanted to know if I could tell what was going on with her newish Cordyline fruticosa 'Kiwi.' I did answer, but didn't have a lot of confidence in my answer, and offered to post the photos here and get some second/third/fourth/etc. opinions. So here's the situation. 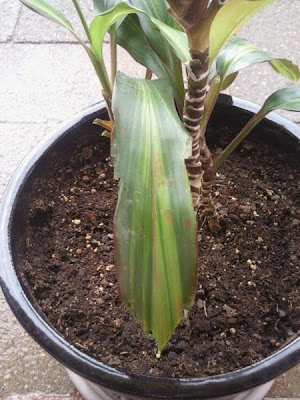 The plant is getting holes in the leaves which forming in straight lines, in no particular spot on the leaves. Also, the leaf tips are drying out and turning brown (though the brown tips were cut off before these pictures were taken), and some of the leaves are getting brownish patches.

There are no visible signs of mites or other bugs. There are a few whitish spots on the underside of the leaves, but they don't wipe off. 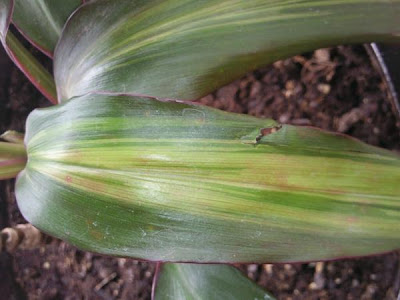 The plant was purchased about three or four weeks ago. It did get repotted shortly after arriving. The home does have a cat and dog, but they are not near the plant, nor is the plant in a high-traffic spot for people.

They're in Tucson, AZ. Another plant at the same store (unclear about whether it's also a Cordyline or whether it's another kind of plant) had the same problem.

The plant is continuing to do the same things even after a few weeks at the house, so it's probably not entirely something the store did (though it could be partly, maybe). 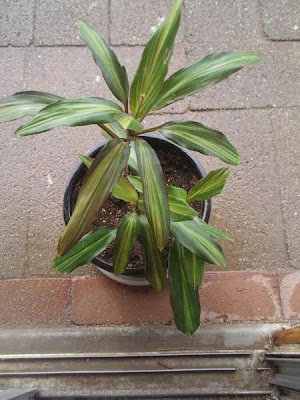 These are the only pictures I've got.

I'll tell what my guess was after we get a few people making guesses of their own, because I don't want to bias people's guesses. I'm sort of hoping that someone will say oh sure, I know exactly what that is; I see it all the time, but everybody should feel free to speculate wildly. 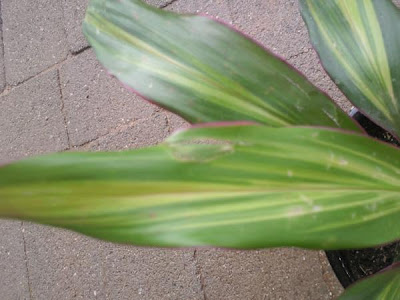 OK... wild guess... I'd say these leaves were mildly damaged by cold... not enough to kill them but to weaken them. New leaves should come in and be all right.

I'm really not sure, but what the heck, I'll venture a guess. Or two. Or three. My first thought is that this plant has been given too much fertilizer. My second is that it's a combination of things like dry air, over-watering, under-watering and too much sun. And my final two cents worth of opinion is that the plant is being watered with very cold water instead of water that has reached room temperature. Cordylines, from my experience, are sensitive to that.

The bottom line is that I really have no clue...

I had similar "holes" - they were actually chew marks from earwigs. I know there are no bugs seen, but earwigs are nocturnal and can live in the soil.

The first thing that came to my mind at the sight of the holes was "Bored cat damage".

My initial guess was some combination of mechanical damage (from shipping or wind, maybe) combined with cold damage, though that should have stopped once the plant got to the house. I also thought maybe dry or cold air might be causing the margin/tip burn.

Had not considered earwigs, though if that's something they can do, then maybe that's a factor in what's going on too.

You're sure it's not just something simple, like bruises from the traveling from the nursery to the store to the home?

I am the owner of this plant. The earwigs part got me. I live in arizona and this years weather could be making the plant be like this. Even though it never sees direct light. The cold water part might be the reason but the weather around us probably freezes the poor thing anyways. It has 3 new leaves one that recently started so I must be doing something right. But, The first leaves that started already has a chipped tip which would probably be the cold. When I had recieved this plant he was the plant in the back that no one wanted and there were no others like him in the tent. When I had got him, he was super soaked and I didn't think to ask why. I've only had it for maybe a little over 3 weeks maybe close to 4 weeks. I changed it's pot and put more fertilizer about 1 1/2- 2 weeks after purchase. We definitely don't have dry weather, but we do have hot sun, cold breezes. He's mainly inside til the room temperature gets too cold. Also! We had been repainting the house recently. Could the fumes also make it tough?