This is one of the orchids from Saturday's orchid show in the Quad Cities. Full-size view is recommended. 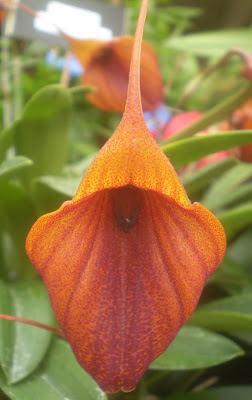 As of Day 3, the allergies are still a complete non-issue, which is awesome. The slight amount of reaction I had at the animal shelter when we first picked her up appears to have been from her environment, not the dog herself; since we bathed her on Friday, I haven't even had a small reaction. Unlike Fervor, too, she can play-bite me without it being a problem, though it's rare for her to try.

On the other hand, her anal glands need to be emptied (which we'll take her to a vet as soon as we can, but in the meantime this is not an endearing quality, and sometimes I have to back away from her because the smell is too much, which she of course doesn't understand). She whines when crated, though usually not for very long. She appears to bore easily, which is both good (probably pretty smart, then?) and bad (going to need more toys, play, and direct interaction?). She's agonizing to walk: she clearly hasn't been on a leash much, doesn't know how it works, weighs about 50 pounds (23 kg) and is very easily distracted by birds and squirrels. Both of which are everywhere at the moment.

She does seem to have figured out pretty quickly that she's not allowed on the furniture, she seems to be totally housetrained, she appears to understand that she's not to go into the basement (we have the stairs blocked off, but it's not like she couldn't jump the barricade if she wanted to: when we tried blocking the plant room, she jumped over the block just fine), and she hasn't done anything obvious to any of the plants, if anything at all.

So it's not all bad, or even mostly bad, and the problems we have are fixable, but at the moment, this whole anal-gland situation means I don't enjoy her a whole lot inside, and her unwalkability means I don't look forward to being outside with her either. And I feel kind of bad that I'm not happier about her being here.

In case no one else has suggested it, you can try getting Sheba a head halter - Gentle Leader sort of thing, that simply helps you keep the dog's head at your side and discourages the sudden bolts and lurches in some direction that you haven't chosen. They are a really kind and effective way to help an untrained dog learn that walks are companionable. I've seen how effective they are, and so much better than the ongoing pullmepushyou sort of interaction.

I had great result with using the Premier easy walk. A head halter always gives a huge impact on the spine when a dog bolts away. I have a very nervous and shy Belgian Malinois from the shelter, a dog which seemed impossible to walk with in the beginning too. Not only she was so scared that she tried to pull me away from certain situations, she also was very distracted by her environment. The Premier Easy Walk is very well accepted by most dogs and doesn't need a period to accept. It's a front leading harness. Very comfy for the dog and owner :-)

Sheba sounds like a great dog. She will love to work for you and with you. I allow both dogs acces in my plant room. They only snif some blooms, nothing worse. It's the cats in the household that don't go too well with my plants ;-)

PS I mainly have orchids and the youngest dog still tries to steal fir bark from the pots. It could be worse, isn't it? :-)

Great to hear allergies don't seem to be an issue with Sheba!

Gorgeous orchid! Thank you for explaining the Slc--I hoped you'd come visit and answer this, because you were the person I thought most likely to know.

Not that cats are like dogs, but my personal cat, Spunky Boomerang, was a wee kitten when we rescued him from the side of the road about six years ago. He has never been outside since that day, and he sticks to me like glue. When I am not home, he mopes, and he comes to greet me at the door. Currently, he's laying on the desk in front of my laptop and monitor in the hopes I'll finally come to bed. Animal loyalty has much to recommend it, which is why I like animals and plants so very much.

Amen to Jodi - I'm a cat person too, but I agree about their loyalty. My cat has kept me from doing things I might have regretted later just because I knew she needed me, and I her.