I've mentioned before, probably more than once, that I generally have at least one Anthurium blooming at any given moment. Here's what I had going on March 23. Just 'cause. 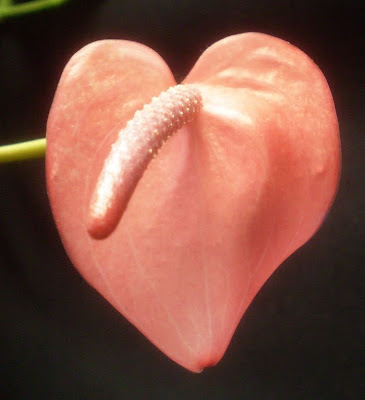 A NOID pink flower, from my longest-lived Anthurium (at one time, I suspected 'Cotton Candy,' but I've never had any idea; pink Anthuriums are pretty common. The photo didn't really reproduce the color well: it's basically just a medium pink, like bubble-gum pink.). The plants had been around forever, and I cut them back maybe a year and a half ago or two years ago, I don't remember, and tried to root the tops in water and then soil. This is a bad idea. Don't do that. I lost about half of the cuttings, and the ones that have survived are only now getting around to flowering again, and look pathetic anyway. It's not impossible to restart Anthuriums, but don't do it the way I did. 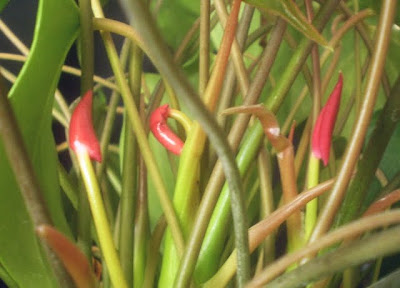 Technically not flowers yet, but they will be. These are buds of 'Red Hot.' As you can see from the photo, 'Red Hot' isn't exactly red, but it's kind of a red-pink. The more exciting part for me personally is that the leaves start out sort of a red-orange, and gradually change to green as they age, which is pretty. 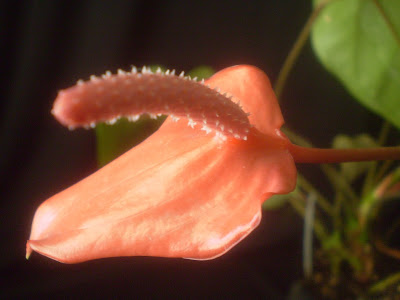 I tried to adjust the color on this to match reality a little better, but failed. This is 'Orange Hot,' a name which is a lie, being neither orange nor especially hot. It's a really interesting color, but nobody at work was fond of it, and it didn't sell that well either: in person it's a kind of pink-orange color that made me think of the "flesh" color of certain (Caucasian) dolls. In some situations, it was attractive, but it tended to clash with anything that was around it. I have one anyway, of course, and it's a pretty agreeable plant: this particular plant has a bud on it too. 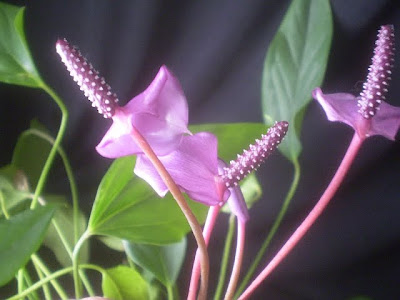 I don't have an official ID for this, but people suggested 'Purple Plum' and 'Anouk' as possibilities when I first posted about it. It's one of the more consistent bloomers as long as I water it properly; it stops if I let it get too dry, but only for a couple weeks. 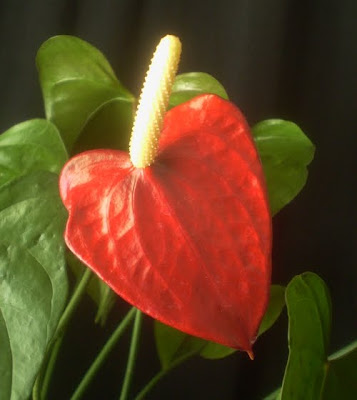 'Pacora' is another good one: the spathes are larger than those on most of my plants, they're a nice, solid red (the spadices vary from light yellow, as shown here, to green, to yellow with a green tip - I haven't figured out what determines the spadix color), the new leaves come in reddish, as for 'Red Hot,' and it's a very consistent bloomer. 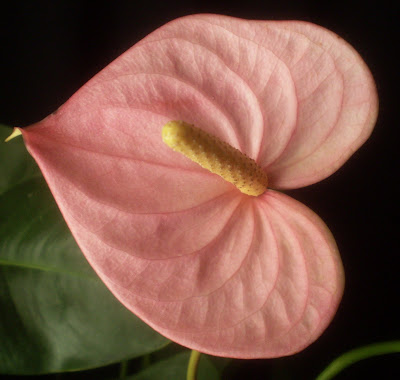 'Pandola' has large pink blooms, sometimes with a little green in the "ears," which turn lighter pink as they age. This flower is a very old one, on the verge of turning yellow, but it's still not looking too bad, considering it's probably been around for two or three months. 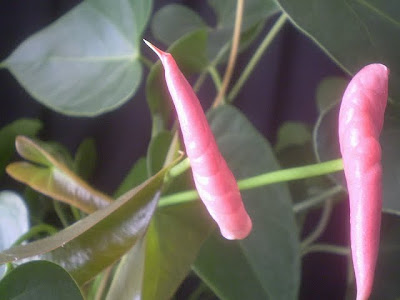 These are more typical of the 'Pandola' color, though they'll be a little lighter than this when they open. 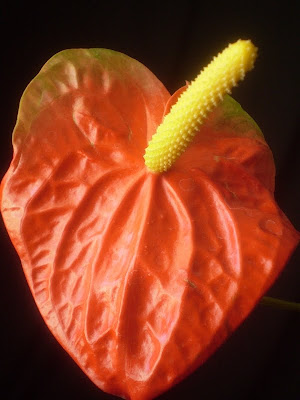 'Florida' is one I've photographed for the blog quite a bit, but it's just so darn photogenic, I can't help myself. And this bloom was there, ready for a photo. So. Unlike 'Orange Hot,' it's a real orange kind of orange, and like 'Pandola,' it also frequently has a little green around the "ears," which you can see in this picture.

I have other varieties here, including a couple red-violets and a white, but they weren't blooming on the 23rd. Perhaps another time.

Mmmmm.....Looking at the photos makes me think a post on Anthuriums might be in order on Valentine's Day.

Nice post! Thank you--it's my anniversary today, and I feel like your heart-shaped anthuriums were posted just for us. :)

How do you get these to bloom? I have one that looks doing just fine, but no flowers! It makes new leaves all the time, but hasn't made a single flower since i bought it over a year ago. Are the conditions too stable? Moist air, strong light, i water and feed it every sunday. Why, oh why no flowers?

Very nice, I love the purple one. I have tried with them before, but I guess they didn't like me. It was my sister's favorite flower. Peter on a platter as she called it.

Yeah, but if I'd actually known it was your anniversary and these had been posted for y'all, then it would be kind of creepy, no?

Not sure what to tell you. Mine are indoors year-round, in either very strong artificial light (before we moved) or a large east-facing window (after). They're in pretty loose, barky, fast-drying soil, and I drench them completely about every two to four weeks, depending on pot size (whenever the soil is basically completely dry). I use an Osmocote time-release 14-14-14 fertilizer, and add more maybe every three to six months. The air in here is basically normal indoor air except for being more humid than usual: if it gets much warmer than 72F/22C, then I get uncomfortable, and if it gets much cooler than that, then the plants get uncomfortable, so we aim for a steady 72 all the time.

Also, very small plants sometimes just take a while to get going; with the pink-flowering plants I tried to cut back and restart, the old plants have resprouted new leaves and everything, but they have yet to flower, and only two of the cuttings (out of about ten) have flowers so far, despite the fact that this was well over a year ago (maybe even closer to two years).

Whoa, I had no idea they came in so many colors. I am now a fan of the Purple Plum! Matti