It's very difficult to get a decent picture of Sheba; she has a tendency to strike a perfect pose for just a few seconds less than the time it takes me to turn on the camera and start it autofocusing. So I get a lot of shots of her blurred back half running out of frame. Nina, who spends the bulk of her time sitting perfectly motionless, is a lot more cooperative. I'm just saying.

Walking Sheba using the harness we got for Fervor works much better than using the leash-and-collar system we were doing before. I can't figure out why it would be that much different, from her perspective. Possibly she clued in to the whole "walking" thing and it just happened to coincide with changing to the harness. Whatever it is, walks have gotten much more enjoyable. So that's good. 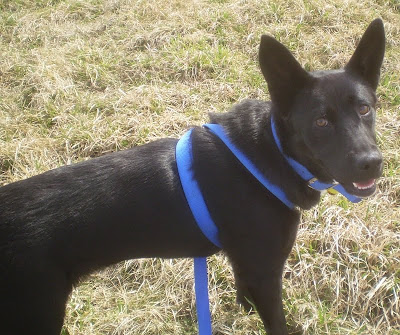 And no, the harness is not ordinarily on her like this; I hadn't noticed when I took the picture that she'd stepped over the leash. I was concentrating on getting the picture.
We still haven't chosen a new name for her, after a week to think about it: she sort of responds to "Zeal,"1 more so than any of the other names under consideration (the leading three candidates for me, at least, are Anya,2 Yoshimi,3 and Maui,4 though I don't think Whiskey,5 Yoko,6 or Zeal have officially been ruled out.). And there's also the chance she'll remain "Sheba," because we're sort of used to calling her that, and she sort of responds to it.7


And then there's the puking thing. As of Thursday night, we've had Sheba for seven and a half days, and she's vomited three different times already. The first time doesn't count, because it was pretty obviously carsickness, but still. I gather from reading around the internet that throwing up is just something that dogs do from time to time, and it doesn't necessarily signify illness like it would for a person. Nor does she seem to be particularly uncomfortable during or after, so I'm not worried about it yet, but still -- this was not in the brochure.

She also enjoys ice cubes, begs for food a lot (though she's getting better about it -- we've agreed that we don't want to start feeding her people food, lest there be confusion about which people food she's allowed to eat, but sometimes it's hard to restrain myself 'cause of how she's adorable), and is, variously: obsessive about birds, pretty interested in squirrels, bewildered by snakes, scared of cats, and desperate to meet other dogs, all of them, even the ones who are clearly barking at her in a threatening manner. She spends a lot of her day attempting to determine exactly where I and the husband are, so she can sit down precisely in between us. (This is more complicated when one of us is upstairs and the other is in the basement, but she does the best she can.) She's not entirely disinterested in the plants, as Fervor seemed to be, but I haven't actually seen her try to chew anything. The biggest problem to date has been that she's gotten into the orchid bark once and the empty plastic pots twice. No real damage either time (though she may have eaten a little of the orchid bark), but it's something that needs to be watched. 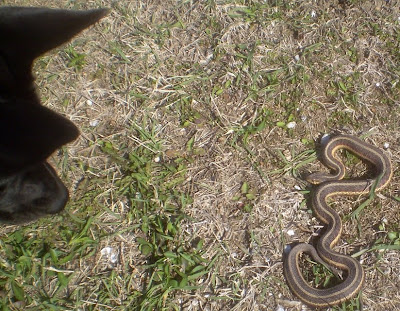 Sheba being bewildered by a garter snake.
Otherwise, it looks like things are pretty much working out. It's different, obviously, and we're all still adjusting, but it seems like this is going to be okay.

-
1 Chosen to parallel "Fervor."
2 I think Anya is the female "Buffy the Vampire Slayer" character to whom I best relate. Tara was excluded from consideration because the husband's former cat was named Tara (not after the "Buffy" character), but I probably would have gone with Anya anyway. (EDITED TO ADD: Anya also fits her personality better than some of the other options.)
3 From the Flaming Lips song (and album) "Yoshimi Battles the Pink Robots;" Sheba responds slightly to "Yoshimi" too but it's probably too many syllables to use for this. Also it gets the song stuck in my head.
4 The husband lived in Maui off and on for an extended period during his misspent youth.
5 From the character in "Dollhouse."
6 From Yoko Ono. "Ono" was rejected as a name because of the danger of accidentally calling the dog every time something bad happened, though I prefer its sound to that of "Yoko." (EDITED TO ADD: Personality is entirely wrong for Yoko, though the husband noted that if we named her that, we could attach a tiny pair of scissors to her collar so people could cut off pieces of her fur. [We would not actually do this, as it would be dangerous.])
7 People have been calling her this for about a month now, so she's kind of used to it, but I don't think she responds to then name as much as tone of voice. I mean, we could still change it if we wanted. We don't know what her name was before she was a stray.
Posted by mr_subjunctive at 2:30 AM

I'll just quote my daughter (whose dog family runs about 7 or 8 at a time): "Dogs barf." Period. Sometimes a different food will do it, but let's face it, it's gonna happen.

One of our dogs barfed whenever he encountered anything out of the ordinary - trip to the groomer (but not the vet because he's my BIL and we see him out of the office), new food, too much excitement, some car rides, thunderstorms. Could have done something else, like pee, glad he didn't.

She's a sweetie. I also love the snake picture. I kind of like Yoko as a name, though Anya is nice too.

Oh. Dude. Anya, most definitely. Or Anyanka for the full effect. She is, also, the character with which I most identified... I teared up when Buffy stabbed her through the chest after she became a vengeance demon again and killed all those frat boys.

The mayhem and miscomprehension of human social interaction are, I think, key qualities in a dog. Perfect name.

I just wondered, Mr. S, if Sheba (or whatever name she is) has been spayed yet. I had a kitty who had a strong odor until she was spayed.

She has. The shelter had it done not too long before we adopted her; there was some comment about how she'd only just gotten her stitches out.