The longish essay-type thing I had planned for today first turned into a different post than I had intended to write, and neither the original idea nor the new one were ready by the time I woke up yesterday. Also the coffeemaker has decided to stop working, plus we'd already been planning to go to the Illowa Orchid Society Spring Show at Wallace's, in Bettendorf (~1 hour away) yesterday so that I could get new and exciting pictures of new and exciting orchids for you guys, but then we had to figure out what to do with [not?-]Sheba when we went, because if we took her there was a good chance she'd yak in the car and be miserable, but if we didn't, she'd be alone in the house and be miserable, and then also plus I had to start the watering cycle again because I had Salvia elegans wilting in the basement already. 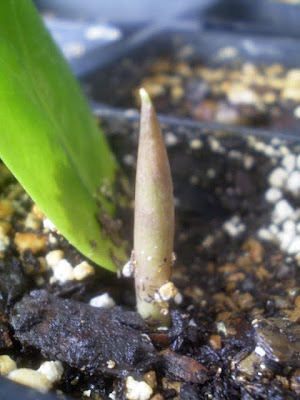 So yesterday just kind of didn't work. On a number of levels. And instead of the thoughtful, psychologically penetrating post that I'd thought I would post today, you get a long, drawn-out series of excuses and a couple kind of ugly pictures of baby Zamioculcas plants.

I don't know when these were started for sure; they came from plants that came into work with a few of their leaves broken off. If I'm remembering everything correctly, that means I've had these for either 13 or 17 months. Growing Zamioculcas from leaflets is really not worth the time and effort unless you do it on a pretty large scale, and maybe it's not worth it then, either. There's also the disappointment where sometimes even after you get a leaflet to sprout and nurture it along for a year, it'll still fall over and die on you if you give it too much water (has happened to me). Or it will just sit there doing nothing for ages if you don't give it enough water. But it's kinda fun, if you have the space, aren't made unhappy by looking at dirt for a year and a half, and have a really flexible definition of the word "fun." 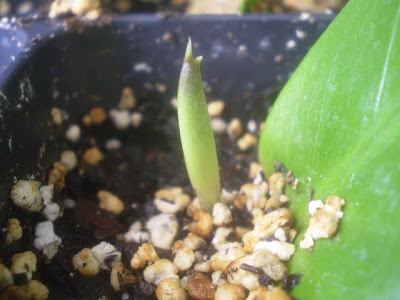 On the more positive side of yesterday, the trip to Wallace's netted me a few months' worth of orchid pictures, and they're mostly prize-winning orchids of genera we haven't seen at PATSP before, so that much was very worthwhile. There were orchids for sale all over the place, too, but I think I have decided that orchids are just not going to be one of my things: I don't seem to have a natural talent for growing them, and learning seems likely to involve a lot of plant corpses and even more money. Certainly the flowers are often breathtaking, but I don't need to have all the plants I see, not really. 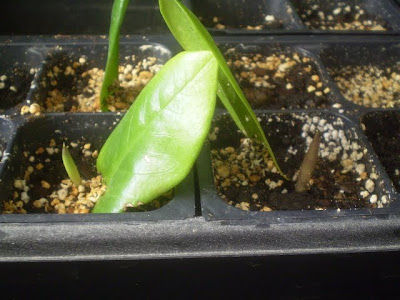 I did buy an Iresine herbstii, though, and had a nice conversation with one of the employees (Kate Terrell, Nursery Manager), because she e-mailed me after running across PATSP somehow, and she told me I should introduce myself if/when I visited for the orchid show. We had a nice conversation, and of course it's very gratifying to have somebody in Eastern Iowa taking blogs and the internet seriously, particularly when it's my blog. There may be more on this later. The conversation got cut short when she was called away to handle a tree question, and my camera's batteries died shortly thereafter, so we left without getting a proper well it was nice to meet you in, but we'll be back at some point, and y'all may see more references to Wallace's in the future.

As for Sheba, we left her crated at home while we were gone, after first taking her on a long and extremely frustrating walk (Sheba does not yet see the walks as a collaborative activity), and playing with her until almost the exact moment we left. So she probably slept through most of the time we were gone, or at least that was the plan. If she was upset by being left alone at all, she appears not to be holding it against us.

You don't need to have all the plants you see... Now, that is something new to me! I need to repeat that to myself every morning.

Also, congrats on the starts of Zamioculcas leaves! My leaflet went yellow and croaked--there were complications with my ripping it out of a pot and sticking it somewhere else after about 9 months. It had a growth the size of a marble and two roots just a few inches long. I don't remember why I did that, but I had to, for some reason.

I took two kicked-off (not by me - there was a rather dramatic chess tournament going on) leaves from a ZZ in a public atrium last winter - perhaps January? Then this January, so approximately 12 months give or take, both leaves sprouted one baby stalk each and then the motherleaves rapidly turned yellow and died. I may have damaged one of the new stalks by ripping off it's yellowed motherleaf before it was actually time, but so far it just seems moderately unstable. The other seems fine. We'll see how they do - I potted them together after the stalks emerged.

This is pretty much funny - your ZZ plants are stoners but our plant is... Well, kinda' like a hyperactive squirrel on caffeine (have you seend the Hoodwinked movie?) - we bought it on this years Valentines day, when I chose my camellia and my husband said he would like to have something that starts small and will grow up and be big. When we got it, the plastic pot was already distorted a bit, but we decided to wait before repotting it. It sprouted 6 new stalks since April... But perhaps it's a matter of different location...