I'm writing this on Tuesday afternoon. Tuesday hasn't been great so far. I woke up while having a dream in which a hairdresser was being really rude to me because I couldn't pay $60 for a haircut (Yes, even my subconscious is on my case about what a loser I am. Though, really, it's my subconscious's fault for taking me someplace pricey in the first place: it knows as well as I do that we don't have any money.), and everything's kind of been downhill from there. I was kind of stressed and annoyed anyway, for reasons we should probably not get into.

So I was toying with the idea of just posting a picture of a brick wall, because I couldn't think of anything else, but I eventually realized the stupidity of that plan. And so we have blue flowers. 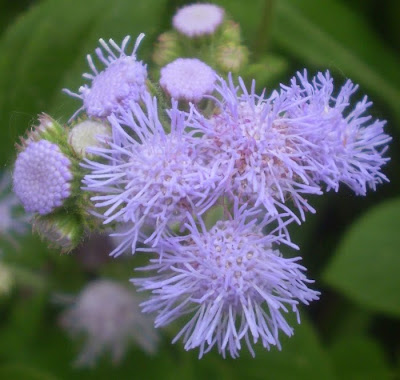 Ageratum NOID. I have nothing new to say about Ageratum. 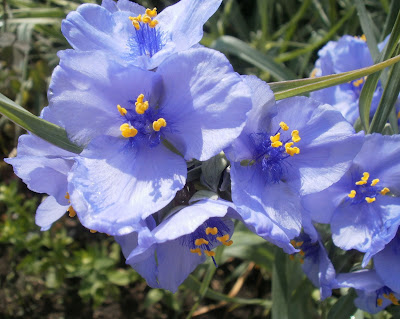 Tradescantia NOID. These are pretty much over now, but for a brief moment, they were blooming all over the place, in fairly substantial numbers, which was cool. 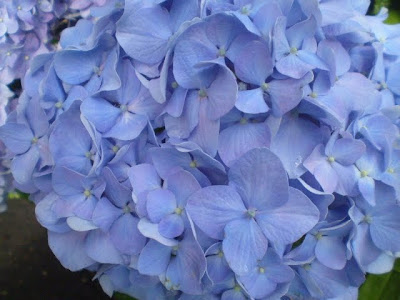 Hydrangea NOID. This is a really old picture, from the former job, that I only recently got around to dealing with. 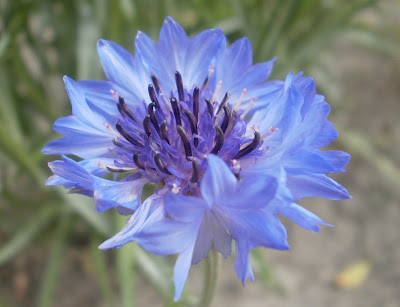 Centaurea cyanus. This particular plant is growing in some cracked pavement here in town, probably not on purpose. The plant as a whole is not especially photogenic, and the background (somebody's junk shed, it looks like) is even less so, but the close-up sure turned out pretty. 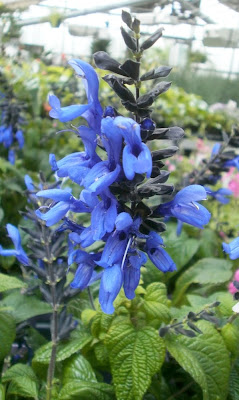 Salvia guaranitica 'Black and Blue.' This is from a semi-recent visit to the ex-job. They're very pretty, but I still haven't forgiven 'Black and Blue' for becoming overrun with aphids the first time I met them (in the spring of 2008). Consequently, I can't look at them without seeing aphids. At least not yet. Maybe someday.
Tomorrow, Lord willing and the creek don't rise, we'll have the first part of the Ananas comosus post, which is the not-especially-useful-but-much-more-entertaining part. (Footnote 5 is possibly my favorite footnote ever. And a while after that, there are stripper poles. So you know it will be good.) Since the bulk of it was written prior to Tuesday, it's much more cheerful than this. So . . . see you then? (UPDATE: And so it was.)

Hmmm, no pix of plumbago? That's my favorite blue flower. Well, that and the Centaurea.

I'm so sorry about the bad dream. I used to pay $60 for a haircut, but have discovered that it's possible to get a really good cut at Haircuttery. It's $16 and I give a $4 tip and get to feel like a Big Tipper.

Yesterday, after spending a couple of hours in the heat, pulling ivy off my house, I went to three different garden centers. At each one, I felt the urge to ask employees if they knew Mr_Subjunctive. And I kept wondering what you would have to say about various plants. I was constantly in a wish-you-were-here state of mind!

Just so you know, even in your funk you manage to make me laugh. A brick wall would have been hysterical! As a writer myself (which is not apparent from my blog...) brick walls happen often. They're actually happening right now with my field research and it's got me in a funk even though the rest of my life is going well for a change...

Hang in there! I look forward to the horticultural stripper pole!

Funny story about dreams and haircuts. I used to live in Seattle and I dreamt that I kept having to ride my bike to Canada to get my hair cut at SuperCuts (do they have those in Canada?!). And each visit they kept cutting it shorter and shorter. And you know what, I liked the dream results! So I went, in real waking hours, and had them chop off 14 inches and it was the first haircut in 21 years that I actually loved! Go figure!

Not that I wish I'd been born hairless but hairfrets have consumed way too much of my life energy. Finally went to barber around corner, take a look, shrug, what the heck it's only hair, repeat.

Blue flowers - true blue - are so rare and so much my favorites. Is it because they're uncommon or is it just some way blue has of jiggling the electrons in my psyche?

Stripper poles! Yeah! Most of those plants are foreign to me but its nice to see so much blue! Here we have our lily of the nile as our main contributor.

Now I'm going to have to listen to Dr. Octagon. "blue flowwwwers..."

You had me at stripper poles. I will definitely be back.

Oh god, I so want to grow a pineapple of my own, I can't wait.

Great blues. I miss those colorful hydrangeas. I do not even know where to begin with the s. poles. lol. Matti

So sorry to hear about your mood. I hope your spirits lift quickly - a stripper pole should help.
I love your blues - very cool color for the summer heat.

Didn't have a picture of plumbago handy, alas. I don't see them very often. Today on the walk with Sheba, I saw that we have chicory flowering again, though, and thought about adding it to the post, but we were going into town today so there wasn't time to do additional pictures.

I think the impetus for the dream was that the husband had suggested that, since I needed a haircut and we also needed to minimize the amount of time spent on the trip (because I am heat-sensitive and will freak out if I am too hot for too long), we could go to a different place to get it cut, go to the grocery store that's practically right next to it, and then we could turn around and zip back home. Unfortunately, we wound up with way too many errands for that to be a workable plan, so I went to the regular place instead. And the dewpoint was only in the 60s, not the 70s, so I didn't have to freak out.

Not sure what it is about blue flowers either. It might just be that they're relatively uncommon, though fully-saturated blue is hardly a rare color outdoors. I mean, usually all you have to do is look up.

There's a Robert Frost poem about it.

Fragmentary Blue
Why make so much of fragmentary blue
In here and there a bird, or butterfly,
Or flower, or wearing-stone, or open eye,
When heaven presents in sheets the solid hue?

Since earth is earth, perhaps, not heaven (as yet)--
Though some savants make earth include the sky;
And blue so far above us comes so high,
It only gives our wish for blue a whet.

I occasionally see Agapanthus for sale around here, but I'm a little too intimidated by them to buy one and try to grow it inside. Though I understand that such things are done.

The idea has occurred, but I think I would probably be part of that small minority that doesn't look good with a buzz cut. Though the increased heat loss from my head might make it worthwhile anyway.

Don't feel bad about your subconscious not giving you make-over tips. My conscious never gives them to me, either. So I guess my subconscious decided it was time for an intervention. 'Cause it was needed badly. It still is.