So, a couple months ago, on April 1, I posted a question for the hive mind regarding this plant: 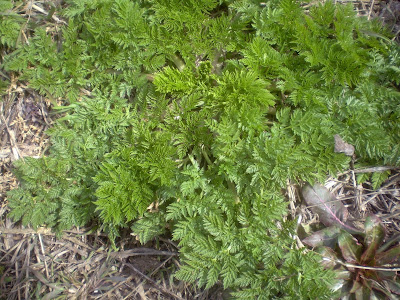 Well, they've grown a lot since then, and I think we need to revisit the ID, because it looks decidedly unlike either of the guesses I got at the time (which were tansy, Tanacetum vulgare, and Queen Anne's lace, Daucus carota). 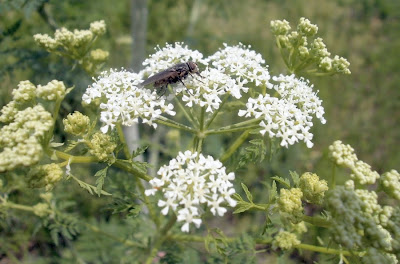 Close-up on the flower, with a bonus housefly. (The fly actually kind of makes the picture, for me; I especially like it in full-size view. In case you're wondering, the fly didn't leave because it was a cold day. I'm guessing it didn't have the energy.) 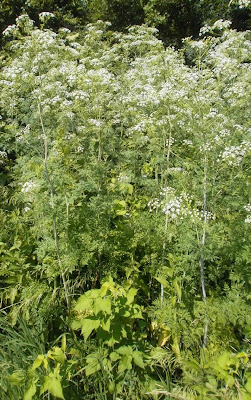 Considerably less-great picture of a large stand of whatever they are; the tallest ones were probably about 7-8 feet (2.1-2.4m) tall; there are at least a couple spots like this in town, where whatever they are is the dominant form of plant life. 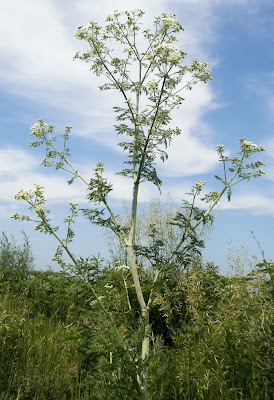 A somewhat better picture of a lone plant, showing the habit as well as I can show it.

If it is hemlock, then I'm a little unsettled. I'm envisioning some kind of Johnny Hemlockseed, walking barefoot around the periphery of town with his little bag of hemlock seeds at his side, scattering the seeds in the town's various ditches and around the edges of the cornfields, squirrels and birds chittering happily alongside.

It's especially weird because I can't recall ever seeing this anywhere else, and a lot of the plants I can remember seeing elsewhere are either not here, or are here in very tiny and isolated patches. Like, if there's mullein (Verbascum thapsus) within the city limits, I haven't found it yet. Likewise for deervetch (Lotus corniculatus), cow vetch (Vicia cracca) and crown vetch (Securigera varia), all three of which are up and down the sides of the road everywhere else. On the other hand, we have alfalfa (Medicago sativa) growing in the ditches and uncultivated areas, here and there, which I haven't seen much of anywhere else. It had not previously occurred to me that weed populations might be so . . . specific, I guess, to different towns.

But I digress. Do we think hemlock? Are there other suggestions?

Sorry, I'm useless with the ID.

Looks totally like hemlock to me. Is that so bad, though? It can propagate very easily w/o human intent. And there are worse things out there, poison-wise. Hell, in Austin, trompillo and datura are found everywhere but it doesn't seem to cause any problems aside from weedy yards and beds.

BTW - I was a national monument over the weekend and one of the park employees said that mullein was an invasive. I hadn't heard that, did your research turn that up?

It's not that it's terrible so much as that it's really unexpected: I didn't know for certain that hemlock was even in North America, and then to be seeing so much of it all at once, it's a little surprising. And then it's slightly more alarming for it to be a toxic plant -- I'm not worried about it, but it's sort of like digging through a junk drawer and finding a razor blade. It didn't hurt you, it's not going to hurt you, but it's still a bit of a shock to realize that there was something there that could hurt you all along.

Or maybe this is something that only happens to me when I find razor blades.

Or maybe the bigger question is, why the fuck is the husband hiding razor blades all over the house?

Yeah, mullein is weedy around here. I don't know how serious of an invasive threat it is, but I see a lot of it around, most places. Not so much here in this particular town, but everywhere else.

Hemlock (at least the Hemlock that grows in Britain) has greenish stems with purple blotches on them which makes the plant very distinctive. The foliage looks right, and the plant looks to large to be cow parsley (you call it Queen Anne's Lace)

Looks like hemlock to me -- I've seen it as a weed around the midwest, and always in concentrated little spots -- something about the soil maybe? But that seems to be its way. Nowhere at all, and then BAM, a huge mass of it. I've heard that going at it with a weed-eater can result in fairly painful rashes from the splatter, but I don't really know if it is true.

Yeah, I read that about the purple blotches too, though most of the pictures that come up through Google don't show the purple that clearly either, so maybe it has something to do with growing conditions. I have looked up-close at some of these and failed to find purple spots.

Wendy at Muck About said...

In her book Wicked Plants, Amy Stewart says if you crush the leaves and smell them, the odor is a distinctive one of "parsnips or mice." Hmmm...

Tigerdawn, I wouldn't believe everything that Plato writes. It would have been a lot messier than he reports. The first symptoms are nausea, vomiting, abdominal cramps, diarrhoea.

I have friends at school studying the hemlock invasion into the Chicago region. It's coming up along highways and possibly train tracks and is most definitely here and moving north. There are a handful of huge Apiaceae plants that all look kind of similar and I avoid them all. Some will give you a nasty rash from touching them, even if they're not hemlock.

Oh yeah; I meant to come back to this.

I have still not checked out the whole mouse/parsnips smell business.

I did go to Iowa City with the husband last Wednesday, though, and saw hemlock growing in patches around there as well, so apparently I was just not being observant previously.

Some of the plants do in fact have purple blotches on the stems, though they're not really big enough that I'd call them "blotches." More like "dots." Not all of them do, and those that do usually only have them on a small fraction of the available stem area, but they're there.