I'm realizing that I should probably take more Nina pictures soonish; I don't have many that you haven't already seen. The main reason I don't take pictures of her more often is that the sides of the tank need to be cleaned, and the dead plants removed, and the living plants cleaned up, and this is all work that I never find time for. Sheba, on the other hand, is a lot newer, a lot more intrusive, and a lot more person-like, so I've been kind of focusing on her instead.

I'm uncertain about whether this makes me a poor lizard dad or not. I mean, she's not going to like the interruption, when I do take her out and clean everything, so maybe it's just as well if I put it off. Anyway. So today we have a Nina silhouette, because that's the best way I came up with to (sort of) hide the water spots:

As for Sheba, well, we've been working with her a little bit on commands, but she's not very good about any of them still. She knew "sit" when we got her, more or less, and "come" seems to work pretty well, usually, but she has completely failed to grasp "stay" so far. I've all but given up on "heel." She also doesn't seem to understand the object of playing fetch. (It's possible that she understands, but thinks that it's a dumb game.) For a dog who's part Laborador Retriever, she's not keen on the retrieving part. We should have looked for more of a Laborador Relinquisher. The other problem we're having, training-wise, is that it's impossible to truly get her attention unless there's food or a small animal (which is also, I guess, food) involved, but even when food is involved, you still don't really have her attention, because she's so focused on the food that she's not really paying attention to what you're saying or doing. Usually, if you say anything ("Lie Down," "Stay," "Come," etc.) in a commanding tone of voice while conspicuously holding food, she'll sit, on the theory that even though she wasn't really listening, the word could have been sit, and it's worth a try.

But anyway. I've been trying to figure out a way to get a photo of a particular expression she makes, despite the fact that she's not big on sitting still, and I think I've finally cracked it. The trick is to be holding something she wants (food, or a tennis ball). Except for her tail (invisible in the picture because it was wagging so hard), she'll hold very still, waiting for whatever it is to move. And voila. 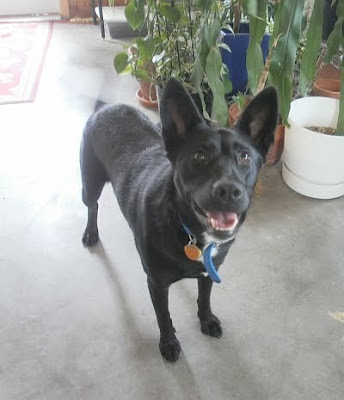 Sheba is so new she might take some time to start paying attention to you. But here's a trick to start training that.

Tell Sheba to "Watch me" and hold the food in front of your nose. Do that several times a day for a week and she should start looking at your face when you say "watch me."

Another trick, same command, is to have food (usually cheese or hot dog) in your mouth, say "watch me" and then spit the food at her. It takes a second phase to transition to looking at your eyes instead of your mouth but it does get her attention on you. You as a source of food. She never knows when you're going to spit food at her!

Heel? Has that ever really worked, in the history of dog trainingdom? My guess is no. The tips Diana offered sound a lot more reasonable.