Question for the Hive Mind: Schlumbergera

It's bad enough that one of my Schlumbergeras (the pink one) has decided to disintegrate completely, following what was apparently a badly-timed repotting (though the peach/salmon one was repotted at the same time, and seems really happy about the repotting, putting out new growth for the first time in forever), but 'Caribbean Dancer' isn't looking so good either, all of a sudden: 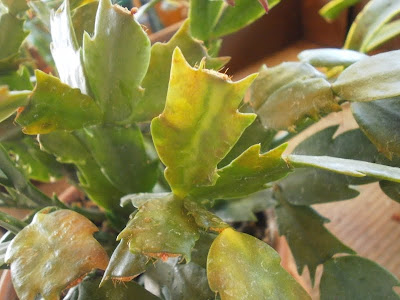 Prior to this, I had no idea that Schlumbergeras even could look water-soaked like this, much less water-soaked and . . . lumpy?

To the best of my knowledge, nothing in the plant's life had changed. I was watering the same way, and at the same times, the temperature range was as close to the same as is possible in the house, it had not been repotted, it hadn't been moved, it hadn't been sprayed with anything, it hadn't been handled or spoken to in a harsh manner. And yet. The afflicted portions of the plant are all on the same side of the plant, which suggests that it's not random, but beyond that, I have no idea. Anybody have any guesses? 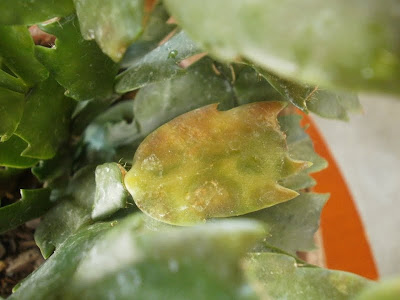 Incidentally, Schlumbergera cvv. won the vote during the hiatus, so it will be the next plant profile (UPDATE: Profile has been written and can be found here.), with Aloe vera and Ficus elastica following, in that order. I have no idea how long this will take to do, but regular readers will know not to hold their breath.

(UPDATE: I had to postpone the Ficus elastica profile for several months, but it has now been written.)

He might be in the throes of suicide. Maybe he got depressed. You could try telling him jokes, but I wouldn't hold my breath for that, either.

With all the rain you talked about, I'm guessing it's fungal infection. Even if actual rain didn't touch it, it could get afflicted by airborne spores and such. Worth trying a chamomile and clove tea on it, if possible.

Don't feel bad about your Schlumbergera. I have the same problem with all these fancy hybrid varieties. Very often it is one side of branches also. I will be very interested if you find out the answer.
I find these "new" varieties so frustrating that I decided to buy some pieces of the old "original" Schlumbergera on Ebay, rooted them, and they are so, so sturdy with no problems at all.

Looks like fungus to me. Maybe too much water/ humidity? non draining soild? I think these are epiphytes in nature so probably should grow somehow like a Cattleya good light, drenched with water in fast drying chunky medium. Wonder if putting it in the sun with some breeze may help and I would also spray some fungicide and repot in fresh medium.

Sometimes one cutting in the pot just goes south. If it's just the end joints maybe you can save it. I'd suggest identifying the worst affected for removal, see what that leaves you, go from there.

Even bad haircuts grow back, so tell the other plants not to make fun. Good luck.

Like you say, "Plants are the strangest people" and my say, "Plants do behave like human beings", each having their own preferences and unique characteristics.

Mr Sub, I'd like to thank you very much for your timely advice and tips when somebody stole my post images and contents. I really appreciate it very much.