Just another random batch of stuff I didn't buy. Some of them are very cool, but wrong for me for one reason or another; some would have worked just fine, and I just couldn't justify it to myself because I was buying other stuff instead, or I was having a weird day, or something.

First up is the one that most impressed me. 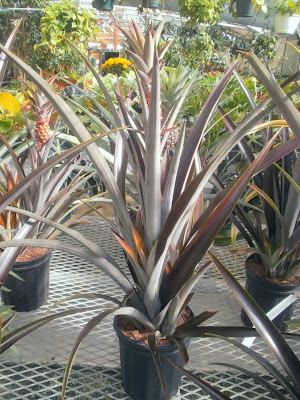 Ananas lucidus. Ex-job. Don't remember the price.
In person, this is a tall, dark red/brown/black plant with a bit of white bloom on the backs of the leaves. It photographed badly, due to interference with other stuff in the background, and too much light, and the camera being just kind of generally bad at color reproduction. If I have a chance to take a better picture sometime, I will do so. But the point is, this is big and spiky and dark and very cool-looking, but way too big for the house, and buying it would almost certainly have taken more than half the money left in my checking account, so it stayed at the store. 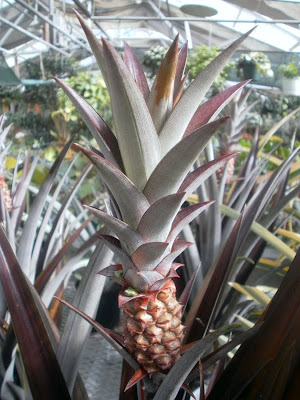 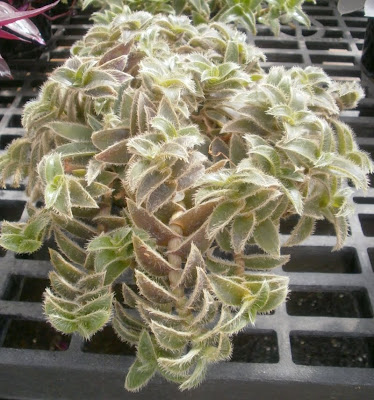 Cyanotis somaliensis. Reha Greenhouses. $5.
Cyanotis somaliensis has been stalking me, I think: I keep seeing it around, and almost buying it, but I haven't been able to convince myself I need one yet. Part of the problem is that I didn't know what it was until fairly recently; once I found out, that was a problem too, because my current Cyanotis, C. kewensis, has been . . . well, not difficult exactly, but sort of hard to communicate with.

But that's been resolved, more or less, so it's probably only a matter of time before I get a C. somaliensis. 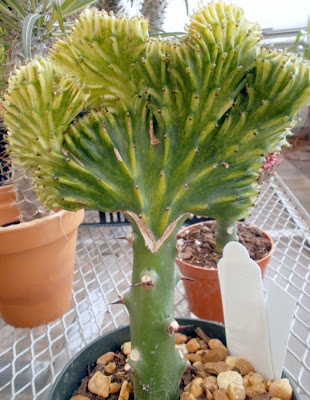 Crested Euphorbia lactea grafted to E. drupifera. Ex-job. $25 or $30, probably.
I'm not really a big fan of grafted plants, and with one exception, I don't really care for crested plants either. So this one never had a chance. But I thought it was worth including here for the people who like them; I've seen lots of different color varieties, but I'd never seen one that was speckled like this. 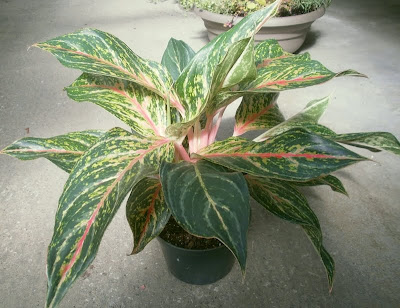 Aglaonema NOID. It was 'Susie' something, or something-"Susie." Possibly it was "Susan," not "Susie." I don't know. It wasn't on the tag; somebody told me and then I half-forgot. Ex-job. $30.
Too much money, but I would have bought it otherwise. I like the red Ags, and this was small enough that I'm sure I could have squeezed it in somewhere. 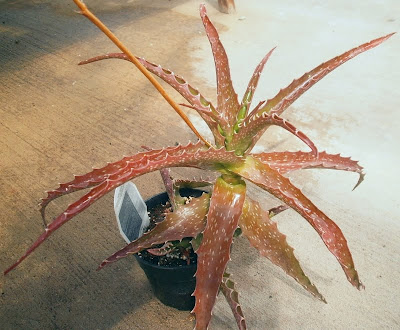 Aloe dorotheae 'Sunset.' Reha Greenhouses. $7? $5? Something like that.
This was a size problem. I don't have a lot of full-sun spots in the house, and although it might not look it in the picture, this was a big plant. I didn't think I could find a spot big enough for it that also get enough light for the plant to stay red. Plus I was buying two and a half other Aloes already. 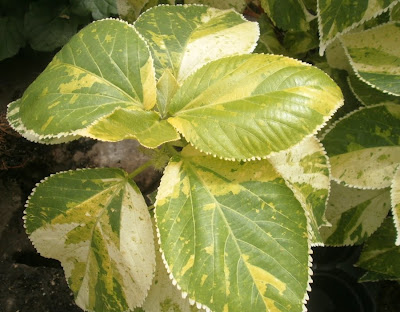 Acalypha wilkesiana NOID. Pierson's (Cedar Rapids). Didn't ask about price.
I suspect this is one of those plants that looks great in the store, but when you get it home and try to grow it gets all leggy and pale and needs to be pinched back every five seconds. (See: Iresine herbstii, Solenostemon scutellarioides.) It just has that look.

I was, therefore, not interested. But there's no denying that it looks great in the store. 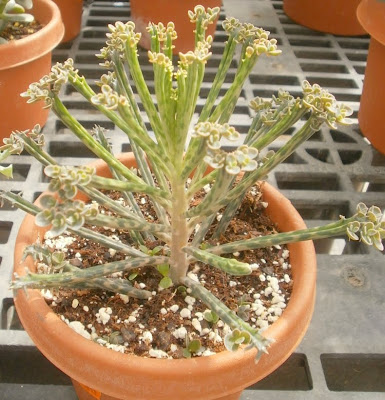 Bryophyllum tubiflorum. Reha Greenhouses. $5.
I kind of want one of these, but it seemed like the sort of thing I could trade for, rather than buy. Not that $5 is a terrible price for a 4-inch plant, though. I hear the flowers are nice. 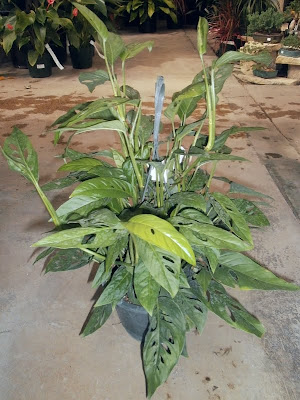 Monstera adansonii. Ex-job. $25? $30?
We had these at work when I first started, and although it was hard not to be impressed with the speed of growth, they got out of hand almost immediately. The distance between leaves (the internodal distance) is long, so you get lots of vine but not much leaf. Also, we had occasional problems with spider mites. And it's expensive. It just seemed like trouble. 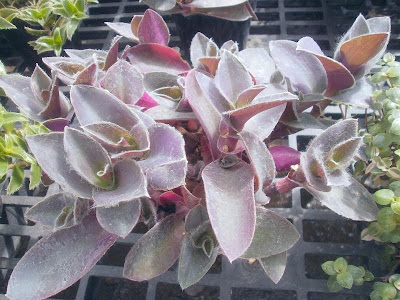 NOID plant from Commelinaceae. Reha Greenhouses. $5.
I don't actually know what this is. I know it looks like a fuzzier, shorter version of purple heart (Tradescantia pallida), and maybe it actually is, but the lady there said it was something else. They had regular T. pallida there as well, and when the two were side by side, the T. pallida was much darker and smoother. They also had a hairier all-green version (which I think was Tradescantia sillamontana) and a less-hairy plant that looked identical to the above NOID, but was green on top and purple underneath. She didn't know what any of them were called, botanically, but said that the differences in coloration were intrinsic, not the result of getting different culture. This is the sort of thing I could possibly figure out on my own if I took an afternoon to Google, and I'll still do that if I have to, but I'm hoping that maybe someone will know without me having to go to that trouble.

I have no memory of the reasoning why I didn't buy it. It was probably that the two and a half Aloes were just cooler.

Wow! Love the Ananas lucidus and the Aglaonema; both of those would be hard for me to resist.

That Aloe d. is gorgeous!

I totally agree with you, that Ananas lucidus is pretty cool. Who has been getting in all these neat plants at PV? They never were very good at getting unusual plants.

I see the ananus lucidus every so often down here in florida, but I've sworn off the broms that don't take a freeze, so in the nursery they stay.

That Ananas is particularly splendid. But it looks large and sun-thirsty.

I saw my first red Aglaonemas two weeks or so ago. I even figured out a place where I could put one, that means making a big mess of the living room, so I'm putting it off. I've made a deal with myself - it'll be my reward when I finally get my driving license (whenever that will be).

My Monstera is about to be moved up to the top shelf of the bookcase and wrapped around the curtain rod (I never close the curtain anyway - I have a hedge!)

I know you meant to exclude the period between August 2007 and May 2009 from that blanket statement.

Could the NOID plant be a cross between Tradescantia sillamontana and T. pallida? This is just a guess, i don't know is that even possible, but it looks just like that.

I like that Aglaonema, I'd find room for it.

I've a Tradescantia I started from a piece I found on the sidewalk in my neighborhood. I've tentatively ID'd it as cerinthoides, and that took hours spread over several evenings. The challenge was finding good images and descriptions. Good luck.

Ha! Your right on that one! Sorry.

PS I think you made the right call on that Bryophyllum. You can find that in an easy trade. I bought it once and now I have a million of those volunteering all over my yard, mostly in the margins of other containers. I don't consider them a vile invasive, mostly because they are easy to uproot. But you don't need to pay money for it.

Huntington Botanical Gardens has a very cute variety 'Pink Butterflies' with great colors and non-viable, pink plantlets on the leaf margins--even better! THAT one you could pay for. I have one of those, and I love it. (Made available in their International Succulent Introduction series.)

I am a huge succulent 'crest' fan. I just love that they are nature's little plant mutants. The grafting point does look a bit obvious but in time will disappear. My only complaint is that I can't get my crested succulent to live longer than a couple years in a pot...weird!

The same Acalypha that you post are in those links:

I think that the ID in the second link is more possible that this variety could be probably the flat reversion of Acalypha TahitI. You can see this in this link: