Almost all of these were walkaways previously, so you'll have seen several of them before. The reason I'm buying plants I'd earlier rejected is, I recently wound up with some money that had weird strings attached: one of the strings was that I spend it all on houseplants. (I'm not making this up. November has been a hell of a strange month. Mostly good. A little bad.) So, you know, twist my arm.

This is the first half; I'll post the second half Friday.

Anyway. In alphabetical order by genus, because we've got a perfectly good alphabet and nobody else is using it: 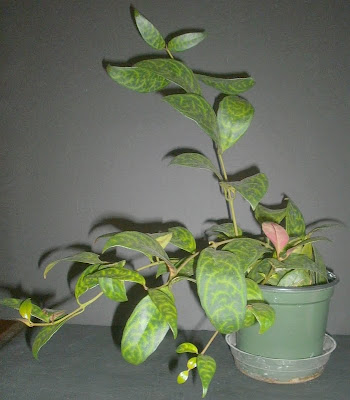 I bought it because it's ornamental on its own, plus Aeschynanthus is one of the few gesneriads that I feel understands me, so there's a resonable chance it might survive long enough to flower or propagate or something. 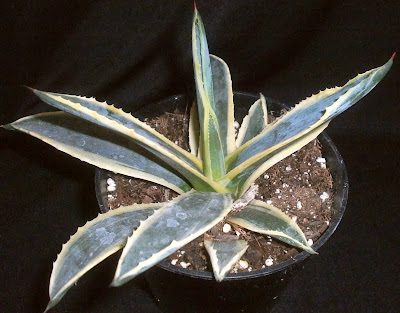 Agave americana variegata. Reha's Greenhouses, Wellman, $5.
And the Agave americana collection is more or less complete. I now have a plain gray-blue one, one with white leaf centers, and one with yellow leaf margins. No doubt there are other varieties, but I feel like three's probably adequate. If this goes at all well, they'll soon outgrow the house and/or stab me in the eyeball, but we're not going to think about that right now.

Bought mainly to complete the set; I was a little wary of Reha's because this time I saw mealybugs on lots of stuff, but I checked this one over several times and it seemed all right, plus I neemed it when it got home. I'll still have to watch it, but I think it'll be okay. 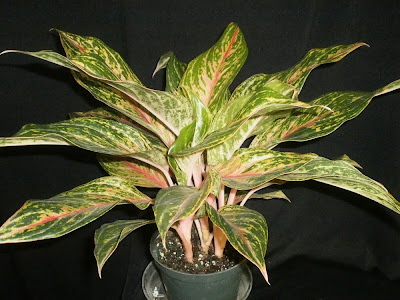 Aglaonema 'Sparkling Sarah.' Ex-job, Iowa City, $30.
I'd remembered the name as something having to do with "Susan," but it turns out to be 'Sparkling Sarah.' I would have gotten it the first time I saw it, if I'd had the money at the time, so I didn't have to think long about this one. Wish the picture'd turned out better, though. 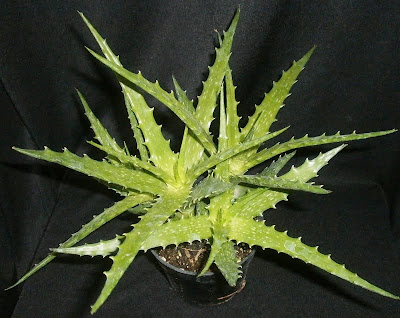 Aloe dorotheae 'Sunset.' Reha's Greenhouses, Wellman, $5.
I'd thought my Aloe phase was over, but they keep making more of them, so I've gotten a bunch.

In bright light, this will turn red, and they had a few that were still red in the store, but I got this one instead, because it had four offsets. I figure I can make red happen if I really want red, but four good-sized plants for $5 is a good deal. 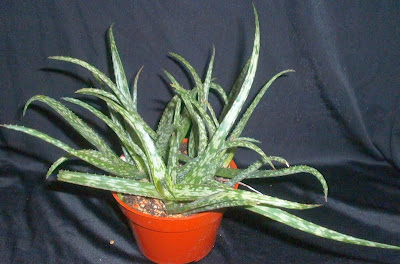 Aloe NOID? Wallace's, Bettendorf, $4.
Wallace's was a little disappointing, this trip: we're not so close to the Quad Cities that we can go all the time, and I'd kind of hoped they'd have more stuff. I mean, nothing wrong with what they had, but I didn't see anything that made me think ohmygod I have to have that. (Also disappointing: Christmas music already. Et tu, Wallace's?) Still, this Aloe got my attention, mostly by being a really pretty shade of green, and I wound up buying it. (Anybody have any idea on an ID?) 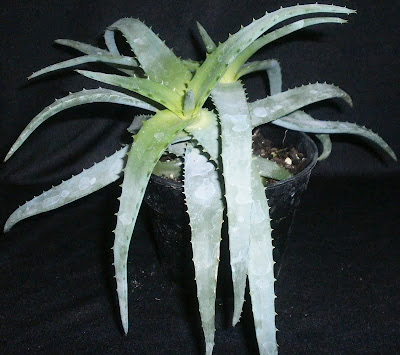 Aloe x 'Fire Ranch.' Reha's Greenhouses, Wellman, $5.
I'd passed this up earlier in the summer, without even realizing it -- it looked pretty plain in the store. But then I saw a picture of Karen715's plant on Life Among the Leaves, and I decided I liked it well enough to hunt for. Turns out Reha's had it all along.

Mine doesn't look much like Karen's (smaller, greener), but I'm relatively certain it's the same plant: there was a tag, at least. 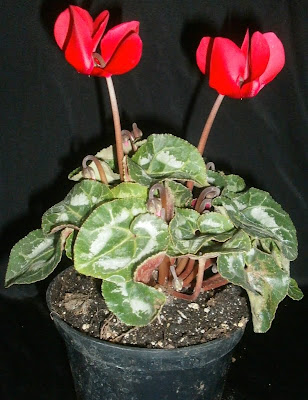 Cyclamen persicum. Wallace's, Bettendorf, $5.
I explained why the Cyclamen yesterday.

This photo both amuses and disturbs me: the two flowers up high, combined with the edge of the pot's curve, form a happy face. Once I saw it, I could no longer un-see it.

The Aglaonema is pretty! I'm jealous! :)

I wish I could buy new plants. But I can't, not until after Christmas - will be difficult enough to keep the ones I have alive between my Christmas market job and moving.

The NOID Aloe looks like A. vera to me... but I'm assuming you've thought of that already. I know diddly about aloes.

The leaves are too rough to be A. vera.

ID on that one is a long shot: there are way too many Aloe hybrids, and I know I'm probably never going to be sure. I was just hoping for a plausible guess, so I can call it something for spreadsheet purposes.

Someone gave you money to buy more plants? Impressive!

I don't know what kind of Aloe that is, big shocker. Haha, just call her Nancy!

What has been seen cannot be unseen. Now I have a smiley cyclamen in my head.

That spiky Aloe is very pretty, whatever it is.

Cyclamen are evil that way.

Seriously? Money you HAD to spend on plants? Damn I need friends like yours.

Nice job on acquiring the yellow variegated Agave americana! But please don't poke your eye out.

The Agave Americana is extremely popular in the California Bay Area. They seem to do pretty well in our weather. I've been strongly inclined to acquire one, but I'm afraid I won't have enough light or space for it. They're so burly and curly!
Although your purchase prices seem right, I refuse to purchase this plant; any time I drive more than a mile I see this plant mature, huge, and with numerous offsets sitting around in medians yards or road cuts...

I could see that. She kinda looks like a Nancy.

Well, but that wasn't the only string.

I'm expecting that to happen pretty slowly, though. I mean, it'll be in a container, and indoors, so it's not going to grow anywhere near as fast as it's capable of.

Good choices! I mostly bought orchids and epiphytic cacti from local growers with my dough... I ended up with 26 rare plants at some really low prices, and used offsets of some in my vertical garden. I love the cyclamen! You should photoshop a smily face on it.

The aloe looks particularly attractive to me for some reason. I don't know why. Maybe it's just a great photograph, but it looks ... relaxing.

I love Sarah, too! Gee, like I need encouragement to buy more plants...

Also... You're not cyclanthophobic? You should try a different angle taking photos--Cyclamen look a lot less friendly from below!

What're the other strings? (Or will that come later? Or are you just going to tease us to death with the lack of information? Also happy Turkey Day Eve.)

I know. I considered mentioning your cyclanthophobia in the post but didn't, for reasons I no longer recall.

I do not currently have plans to reveal the other strings, but this could change.

Okay, and just what does a 'Nancy' look like? Here in Arizona in an "age-restricted" community, there are a million of us (slight exaggeration) and we don't all look quite the same!!

The aloe could be Aloe bakeri.
http://img248.imageshack.us/i/abakeri0bm.jpg/

That's closer than anything else I've seen, so I may start thinking of it as A. bakeri whether I can prove it is or not. Definitely plausible. (Thanks!)