I like Thanksgiving as a holiday, at least in concept and execution. Less enthused about the origin, but I have no problem with setting aside a day to eat pie and be momentarily relieved that things aren't worse. Why not?

I'm a little tempted to take the day off from blogging, on the grounds that few people in the U.S. will be making the blog rounds today, but then I think: what aboot the Canadians? (The rest of the world too, obviously. But thinking about the Canadians is the only thinking that earns me an "aboot" joke.) So here we are.

Fortunately, I have a borderline-appropriate photo for the occasion: 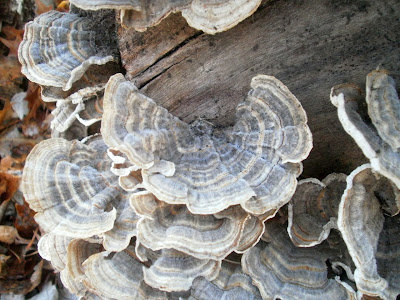 Whatever it may look like, fungi are not plants. In fact, this fungus has more in common with you, genetically, than it does with the stump on which it's growing. (It's not a huge overlap either way, but still.) It doesn't have much to do with turkeys, either, but supposedly the bands of color resemble the similar bands of color on the tails of male wild turkeys (Meleagris gallopavo; see a photo here). 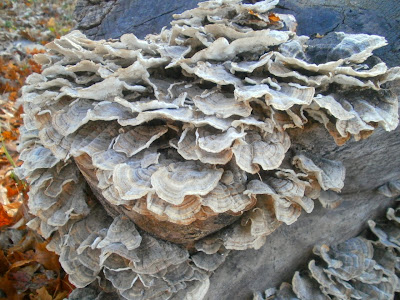 They're also much bigger than they look: most of the mass of the fungus is inside the stump.

Trametes versicolor is technically edible (i.e., it's not poisonous), but it's too tough to be palatable unless very young. It is eaten by some squirrels, turtles, beetles, slugs, and fungus gnats. It has also been used to make green, blue, or brown dyes for wool, is able to absorb and detoxify some (some!) pollutants, and contains a protein which shows some (some!) effectiveness against certain cancers.

As with most potentially beneficial natural products, unscrupulous marketers have seized on these properties to try to sell you stuff. I found one ad for turkey tail fungus as a bodybuilding supplement, for example. The claim is that it supports the immune system, but I was unable to find anybody saying so who, one, wasn't trying to make money selling it, and two, had any actual evidence. Most of the studies I could find that indicated an immune system effect involved cancer patients, whose immune systems may well not be that typical to begin with. Plus you'll notice that "supporting" the immune system doesn't actually tell you anything about what it does, or how. Buyer beware.

But it's a pretty cool fungus anyway.

Thanks for thinking of your non-US-based readers. ;)

This is a inquiry for the webmaster/admin here at plantsarethestrangestpeople.blogspot.com.

Can I use some of the information from your blog post above if I provide a backlink back to your website?

I think I resent being compared to a fungus. ;)

Happy Thanksgiving from one of your U.S. readers! :)

That's fine. Though most of it came from Wikipedia, so if you wanted to leave me out of it altogether you could just quote from them. Up to you.

It IS a cool fungus anyway! Glad you decided to blog.

I have a good Canada joke:

Me: How do you get 34 Canadians out of the swimming pool?

Me: You ask them to get out of the pool.

Hahahahahaha! It's funny because they are so darn nice!

I read more blogs on holidays because the news on TV is even more repetitious than other days.

I've actually a file called ''holding'' where I bookmark Plants are the Strangest People for reading on weekends and holidays.

Happy Thanksgiving, Mr S; hope it was a good one.

Oh, well thanks for putting a name and some info on that fungus. I see it everywhere, and always thought it had wonderful colors, without never searching a name for it. You're doing all the work!