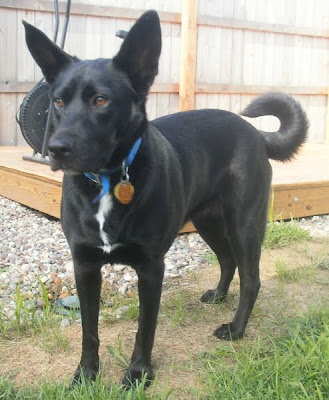 This photo is from some point in late summer.

It isn't that great of a picture -- I'm especially annoyed with the exercise bike behind Sheba, because it's the same color she is and it messes up her outline -- but I post it because it's one of the few photos of Sheba I have where her proportions are relatively clear. Ordinarily, she's either laying down on something, in which case her legs are only partly visible, or she's looking at me because she expects me to do something, in which case her face more or less hides the rest of her body. Occasions like the above, where she's not lying down or staring at me, weird me out, because the perspective is strange to me. There's always a brief moment of shock and surprise that she's suddenly gotten three or four inches shorter. WHAT? HOW DID THIS HAP- . . . Oh, wait.

Not that there's anything wrong with the way she's proportioned: she's a perfectly normal dog-shaped dog. It's just that her actual shape, and my mental understanding of her shape, do not match. I have no idea why this is so; possibly it's related to Fervor (who was considerably taller) having been here first.

If you're curious, the exercise bike is no longer in the back yard. It started out in the basement, but when everything was taken out of the basement following the flood, the bike had to go somewhere, and for some reason it wound up in the yard. I don't know where it is now. I think possibly we sold it. We never used it anyway.

In Nina news, the husband found an aquarium in Iowa City on Wednesday that was large (I think 33-gallon / 125 L) and relatively cheap ($15 and change), so he bought it. We don't have a lid for it yet, or an appropriately-large light,1 but once we get past those obstacles and get the tank cleaned and planted, Nina will be moving on up.

Which leaves us with decisions about planting.

Ideally, I want to use the terrarium for stuff I can't grow in the rest of the house. I mean, it seems wasteful to obtain and light this very humid controlled environment and then fill it with stuff that grows just fine elsewhere. Plus, I think I'm going to maintain the old terrarium as-is for a while, because the Fittonia and Pellionia are both doing so well already, and because who knows, maybe Nina will need to move suddenly, and it would be handy to have a backup. (Though I'm pulling the Vriesea out either way, because it is unhappy. I think I'm going to replace it with a Begonia.) So we don't necessarily need to include the Fittonia or Pellionia in the plans: they've got their own space going already.

So, I'm looking for suggestions. The bottom of the terrarium is 12" x 30" (30 x 76 cm), so stuff that gets wider than 12 in / 30 cm is undesirable (unless it takes a really long time to get there, or gets wider in a single line only, like Strelitzia). It's also really helpful if the plant in question can survive fluctuating soil moisture levels, because those are going to happen, and somewhat compacted soil, because that too. So Streptocarpus is out (twice), as are most orchids, Anthuriums, and quite a few of your larger bromeliads. Plus there are a few plants I'm just personally opposed to including for whatever reason so don't even mention them (Selaginella,2 Codiaeum,3 Chamaedorea elegans4). But so what small-to-medium or very vertical plants have you always wanted to put in a terrarium?

1 Light intensity decreases as the square of the distance. (I.e., if you have a plant a foot away from a light source, and move it to two feet away, the light intensity it's getting in the new position is only a fourth of what it was before; if you move the plant three feet away from the source, the plant only gets a ninth of the light it was getting before, and so on.) The old aquarium has a single compact fluorescent bulb on it, and is 12 inches tall. The new aquarium is going to be 22 inches tall, so the light will be almost twice as far away from soil level, meaning that the amount of light reaching the soil is going to be only a quarter of what it was. Nina herself can of course just climb a plant to get closer to the light, but the plants have to make do with whatever they get, wherever they are, and any ground-cover-type stuff is likely to have taller plants above it, blocking some of the light, which isn't the case in the current situation. Therefore, I need a new light fixture, with more / larger / brighter bulbs, in order to compensate for the additional height.
2 Mostly on the grounds that I don't want to encourage stores to carry Selaginella, which are really no good for 99+% of the population. Also, though, because even in a terrarium, I have no confidence that I could keep one going successfully: I've seen plenty of dead Selaginella in greenhouses, after all.
3 Mostly because I don't think I could find one in the area that didn't already have spider mites.
4 Mostly because I don't think they're particularly attractive, but there's also the problem of finding a healthy specimen (particularly during the winter, in Iowa) and expecting a messy transition. I've spent time pulling dead fronds off parlor palms before, and I didn't like it; it can't be any better when I'm having to do so at an awkward angle, in a situation where a lizard may run up my arm at any moment.
Posted by mr_subjunctive at 2:30 AM

Off the top of my head:
1) Adiantum sp.
2) Ludisia discolor
3) Begonia rex-cultorum
4) Neomarica gracilis
5) a small Maranta or Calathea

Nice pic of Sheba. I think this is the first time we've seen her with her mouth closed. She looks very different without that mile's worth of tongue hanging out. lol

Kaempferia galanga or pulchra, they put up with a lot of forgotten waterings and produce loads of flowers if they are kept warm.

I've always wanted an aquarium with tillandsias on driftwood. They're such cool-looking plants, they're amazingly easy to grow and they don't cost too much. Have you tried any in Nina's home? They'd probably look amazing in there.

Anyhow, great picture of Sheba. For some reason I keep thinking of her as being taller. Not sure why.

What would be fun is if you would change the old aquarium into a terrarium, grow some pretty moss in there, then bring Nina in for photo shoots.

That would be fun for me to see, anyway.

Actually I have found Selaginella to do very well in a terr. I've actually had to cut mine back. I was even able to sell some nice starts off for a buck or two

In my terrs I also have some sort of mini Epipremnum (never been able to get it ID) that looks like a mini rubber tree to me. It only gets 3 or 4 inches tall and does not vine. If you're ever interested, let me know and I'll try to email you a pic.

I think the reason you can't get a solid idea of what the dog looks like is that she appears to be mixed with a few different breeds, sometimes you are seeing inter morphing of the breed characteristics and temperaments depending on the scenario, one characteristic may arise enhancing say the border collie herding instinct, and you would see her more in that light. I work with shelter dogs and have seen some mixed breed dogs change before my eyes. At least that's my explanation. Love the blog

I have Hoya curtisii in my terrarium right now, along with my Viresea. I'm only lacking a lizard.