After I wrote the Schlumbergera truncata profile in August, I was offered cuttings of Schlumbergera x buckleyi, the true Christmas-blooming "Christmas cactus," by a reader, and wound up getting way, way, way way way more cuttings than I was expecting, so I divided them up into nine 4-inch (10 cm) pots to root and put them on one of the shelves in the basement, on a timer. 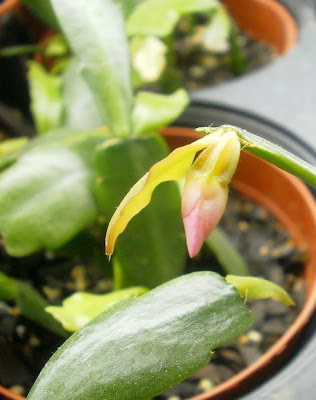 It's exciting because these are the first holiday cacti I've had that are the heirloom, passed-down-through-generations, Christmas-blooming type of holiday cactus (Schlumbergera x buckleyi), and those are rarely available in retail so I haven't seen one in forever.

But then it was confusing, because the light is on a timer, and I'm pretty sure I have these plants on a long day, short night schedule. Supposedly they need at least thirteen hours of darkness at night, and the best-case scenario for the timer on these is twelve hours. So it didn't make any sense, this plant deciding to bloom now.

But then I was excited again, because who cares whether it's supposed to or not, the point is that it is, and I get to see it.

And then a couple days later I was making the who-needs-emergency-watering-in-the-basement rounds, and didn't see the flower bud. Which was puzzling, since it had been right there before. After much searching, I found it -- on top of the soil. The plant decided not to bloom after all, possibly because all my questioning made it think better of the idea. So now I'm disappointed.

Two of the three other varieties I have are blooming now: the salmon one went first (and this year was actually salmon-colored: last year it was more of a peach), and 'Caribbean Dancer' is heavily-budded, and a few flowers are almost ready to bloom. So if I can get everybody properly synchronized, I intend to do some cross-pollinating. Maybe it'll work, maybe it won't. If not, there's always next year. Next year, there'll be more possible combinations, too, because I fully intend to scoop up a bunch of NOID plants from Lowe's once they go on clearance.

The third variety, the pink one with the white stripe down the middle of the petals, is just barely clinging to life right now, following a repotting this summer that the plant apparently didn't want. One segment of stem has survived (there were only about eight to begin with), and maybe it'll make it through the winter, but it's probably done for. I'm looking for replacements.

I've got one bud on mine, too - at least I hope it's still there, I haven't checked in a while. Though that's scheduled for tomorrow.

I'm still fighting the urge to get yet more Schlumbergeras (I already have four varieties, and multiple plants of some of those) - I may do the clearance thing, too, once I've figured out how much space I have at the new apartment.

That's awesome that a reader sent you cuttings for the real Christmas Cactus. I've wondered for years whether I would ever see one in person.

I thought you had one! Didn't you have one a couple years ago, at least, when you wrote a couple posts about them for your blog?

Random thought on the day length... A friend did a study using florescent lights for night interruption (short burst of light in the middle of the night to fool plants into thinking the night was short) and found some plants didn't respond to them the way they did incandescent lights, presumably due to the lack of far-red light from the florescent. Maybe that would partially explain why your plants under lights are flowering. 12 hours is pretty close to the cut off, and if they're a bit less sensetive to the signal due to the florescent thing, that might push them over the edge.

What breed is your Sheba? I have a dog that looks very much like her but we don't know what mix/breed he is.

We don't actually know. The shelter's guess was German shepherd / black lab, possibly with a small amount of some third thing.