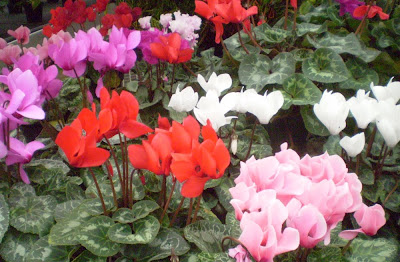 Today we have some old photos from the ex-job (yes, even a year and a half later, I still have unused pictures from there) of Cyclamen persicum.

The species has been on my mind a lot lately: they're beginning to appear in the stores now, and I had this post planned out a while ago and had been pondering them because of that, but there's something else, too. Garden Rant's Elizabeth Licata did a post on 13 Nov. about the article in the Times for which I was interviewed, in which she seemed to be taking issue with the plants discussed on the grounds that many of them weren't particularly good plants for beginners. This despite acknowledging that I'd already said that I wasn't asked for good plants for beginners. (I'd been asked for plants that were easy, useful, strange, exceptionally pretty, or otherwise interesting in some way.1 Although I saw my part of the article before it ran, I was not shown the intro where the author framed the article as being about plants that were easy to care for, or else I would have said something. I suspect post-interview editorial meddling/shaping.) 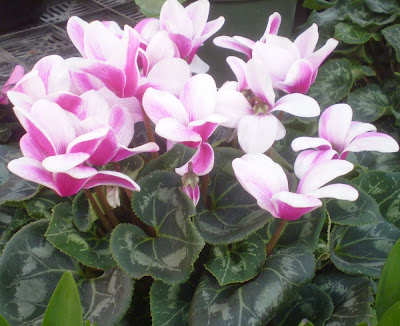 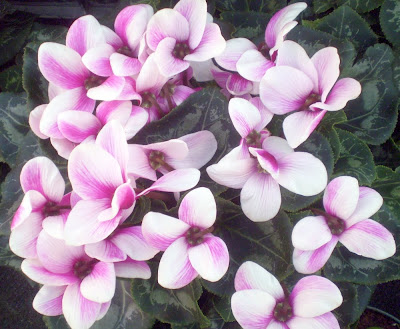 So that felt a little unfair. But then also, Licata suggested her own set of easy-care plants for the Garden Rant post, some of which I agree with (Philodendron hederaceum, Schlumbergera truncata) and some of which I don't (Saintpaulia, Sansevieria trifasciata, Epipremnum aureum2). And among the Licata "easy" plants is Cyclamen persicum.

Really? Could it be? I've long been intimidated by Cyclamen, because they have fairly specific requirements (cool temperatures, bright light, summer dormancy, moist soil), and in my book the more specific and inflexible the requirements, the less easy a plant is.3 I mean, an "easy" plant you should be able to treat however and have it still work okay most of the time. So this is puzzling, and I am skeptical, but I bought one on Friday anyway. We'll see. If it works out, then hooray (I've always thought they were pretty), and if it doesn't, I'll be going after Elizabeth Licata with a (metaphorical) hatchet. Should be a good time either way. 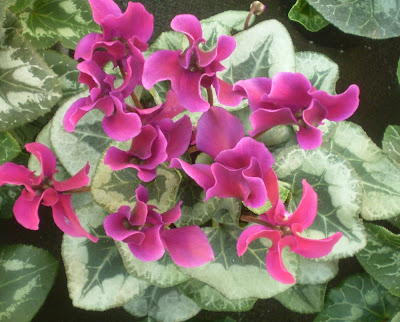 Pictures of the new Cyclamen, as well as the other recent purchases, tomorrow.

1 I assume the same is true for the other people; I don't know how else Asplenium spp. could find itself in an article about "hard to kill" houseplants.
2 Sansevieria trifasciata scores as an easy plant on the PATSP scale of plant difficulty, as does Epipremnum aureum, but neither one do particularly well for me. Saintpaulia and I are getting along now, at the moment, though we've had a turbulent past, and I wouldn't recommend one to someone new to houseplants. Sansevieria and Epipremnum I might, because even if they're not easy for me, they're easy for most people.
3 Cyclamen persicum rates a 7.1 (pretty damn difficult) on the PATSP scale, at least according to what people say you're supposed to do with them. Once I've had actual personal experience, that may change.
Posted by mr_subjunctive at 2:30 AM

A short post from a commenter for the first time; thanks for all the time put into your blog! It's great reading

I really like the look of Cyclamen, but never thought of them as easy. They do have specific requirements that need to be met if you want to succeed with this plant. And I can't meet all of them, so I don't have one in my home. But they're at the stores now and I'm soooo tempted to bring one home. I almost bought one last week but managed to force myself to leave without one. But now that I've read your post and you've gone ahead and taken the plunge, well, I may very well do the same.

Anyway, good luck with it. They're really cool-looking plants.

This all brings to mind something that has been bouncing around in my brain: Easy, for any plant, depends entirely on climate. For outdoor plants, we have an imperfect, but somewhat functional system of hardiness zones and so forth -- but for indoor plants, which have a far simpler, more universal set of climatic variables (temperature, humidity, light) things are just called "easy" or "hard" I'd love to set up a bunch of trial greenhouses with different temperatures, light levels, and humidity and actually TEST what conditions house plants will grow in.

Bought a mini variety an hour ago. I chose the one with the most unopened buds.
You are such a bad influence.

Cyclamens are a pain in the ass! I would never, ever put them in an "easy" category. I don't even think they're particularly attractive either.

Cyclamen are just beginning to appear in the stores now? Over here, we've had them for at least two months.

I only like the small varieties, but I've never bought one for myself. Can't get the temperature low enough/light levels high enough, at least not at the same time. Though they're doing well on the balcony - I don't expect them to survive the winter, but for now, they seem to be happy.

Ahem. In the Rant post, I did quote you saying exactly what you say here: “I wasn't told that the aim was to come up with ‘hard to kill’ plants." I made a point of reading your blog post so I could give your side.

I may be wrong about cyclamen--though a hatchet seems extreme--but I did try to fairly represent your experience with the Times, as you reported it here.

Regarding cyclamen--I have had one for 10 years, and I pretty much ignore it. So I figured it must be an easy plant.

I bought a Cyclamen once and didn't have any trouble with it -- until the Cyclamen mites got it. However, the mites were already present when I bought the plant; I was still too new to plants to know what to look for when purchasing them.

Despite the fact that they're supposed to prefer cool temperatures, it didn't seem to mind living indoors in AZ. I bottom watered it whenever the top of the soil felt dry, and it seemed to like that.

It was a lovely plant with beautiful fragrant flowers that one could actually watch open! I might buy another one sometime, and just be more careful about examining it for mites.

But, again, it's not unfair in a way that I'm upset about, and I don't have a problem with you answering the easy-plants question. Hell, you may be my favorite Ranter by this point, since you're the only one who ever talks about houseplants as though they were possible and desirable. Gods forbid I should discourage you from writing about houseplants by being overly touchy when you do.

The Cyclamen thing still seems weird to me (do you have an especially cool house in the winter? Buffalo, NY, so I suppose you probably do), but I'm giving you enough credit to try it out for myself. Maybe it'll work: if it doesn't, well, I'm only out $5.

The only people I know who have good luck with Cyclamen are old ladies. I think it has to do with frigged homes and lots of free time.

Oh my, what a thicket the issue of "easy" plants is. Elizabeth mentioned things that are impossible for me to grow (and I'm fairly skilled at this). Environment environment environment! God help any gesneriad that comes through my door (people think they make good gifts?). On the other hand, my cool, offline, house with all its gas appliances and wood heat is heaven for some things that are touchy in modern homes. Try it and see is a good thought for anyone, and keep the compost bucket ready for the funerals.

I buy a couple of cyclamen every fall and grow them outside on my porch here in the Phoenix Area. It is perfect for them. They love the cool, sunny days. They even can take frost as long as it is not too frosty. In the late spring, I discard them because I find that they just can't take the heat here in the summer. Even though they are resting, it is just too much for the bulbs or corms or whatever they are.

Totally random fact: Cyclamen were Sigmund Freud's favorite flower. This is what you learn when you're the son of a psycologist/botanist.

In fact, the cyclamen was the favourite flower of Freud's wife, Martha. When he dreamed of the cyclamen, he took this as a reproach to himself for so seldom bringing her flowers (and remarked that his own favourite flower was probably the artichoke - which she regularly brought him from the market).