I don't understand Facebook's popularity either, especially considering their cavalier attitude toward user privacy. (Google/Blogger is, I suspect, not better, but so far they seem less blatantly bad than Facebook.) And I gave Twitter a chance, but it's too much, and I found it more frustrating than useful. (I don't think in 140-character snippets. It's okay. The rest of y'all go on ahead into the future without me.)

But, while I don't understand the advantages of Tumblr as a platform, I'm interested in some of the people who use it, and sometimes one follows links from site to site and winds up finding something interesting. I don't know how I got there, but I saw this on Hometown Memories, and for some reason it speaks to me: 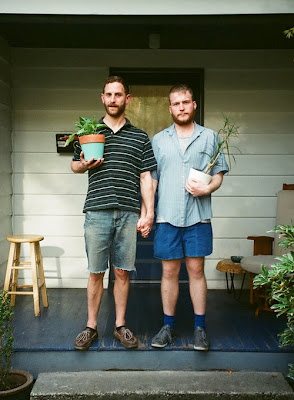 Labels: elsewhere on the web, other

I like facebook because I can keep up with the people I know without actually talking to them.

The world isn't going forward without you. If anything, you're smart to stay grounded in real life. Twitter and facebook are both fads that are pretty much a waste of time (hence, why they are popular).

Facebook bugs me, especially now that Goldman Sachs is investing in it (with taxpayer dollars - bastards). Twitter only became funny to me because I found a group of friends here in town who use it to insult each other all day (affectionately), then detail their exploits each night. Very funny stuff. Other than that, it's useless. Unless you're in Egypt or somewhere. Then I guess it's good.

Nothing beats good old fashioned friendships and relationships. I don't care what the kids say, or all those people I went to high school with.

I use Facebook to receive messages from my landlady.

I agree on Twitter, reducing my thoughts to 140 characters would be terrible.

I am stridently anti-social networking by computer. I think it mainly says that I'm old, but also that I prefer dealing w/most people face-to-face or by phone, if at all.

Tumblr is a greater step towards zero-attention span. They're essentially digital photo albums, so you don't even have to read a sentence, much less a full twit (or tw@t or whatever they're called). But Tumblr does have some merit, especially if you're into photography or imagery. And that IS a lovely image. Alright for blue socks! grrr

Facebook's privacy controls aren't as bad as people keep saying. It was shady for a while, mainly because many users were too lazy to figure out how to change their privacy settings. It's a useful site for keeping up with people, or finding old friends.

Tumblr is kind of obnoxious. It doesn't seem to have much of a purpose other than to give pretentious young people a way to show off all of the things they like, or think are beautiful, or artsy, or whatever. However, there are some great photographs on there, and I think you posted a good example.

If you're, um, into that sort of thing, I believe that photo comes from a Flickr series that includes this couple with quite a bit less clothing involved.

Very intimate and artistic and touching, of course.